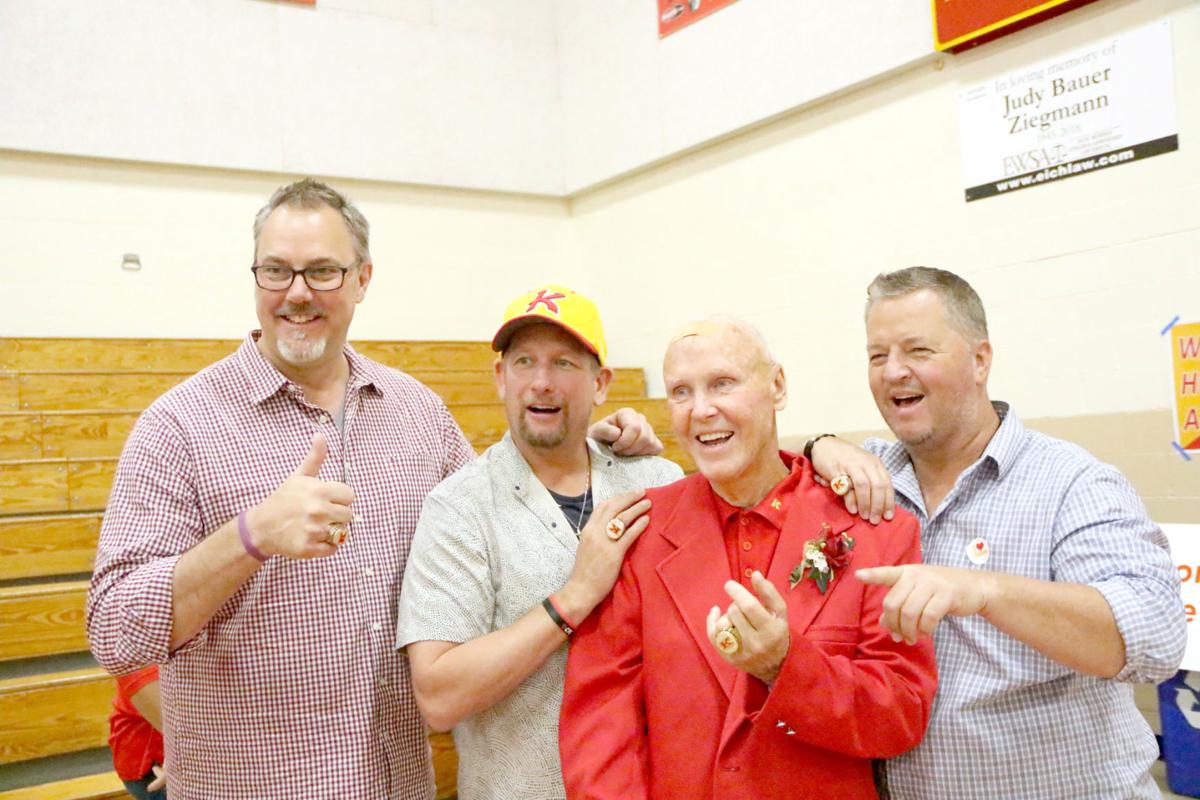 Wayne Chandlee (second from right), coach of Kuemper's 1985 state basketball championship team, enjoys a reunion with players from the team, (from left) Brian David, Nick Nurse and Frank Molak. Chandlee was honored guest at Kuemper homecoming, which featured the theme "A Knight Back in Time." Nurse, head coach of the Toronto Raptors, who won the NBA title this spring, presented state-championship rings to all members of Kuemper's 1985 team. 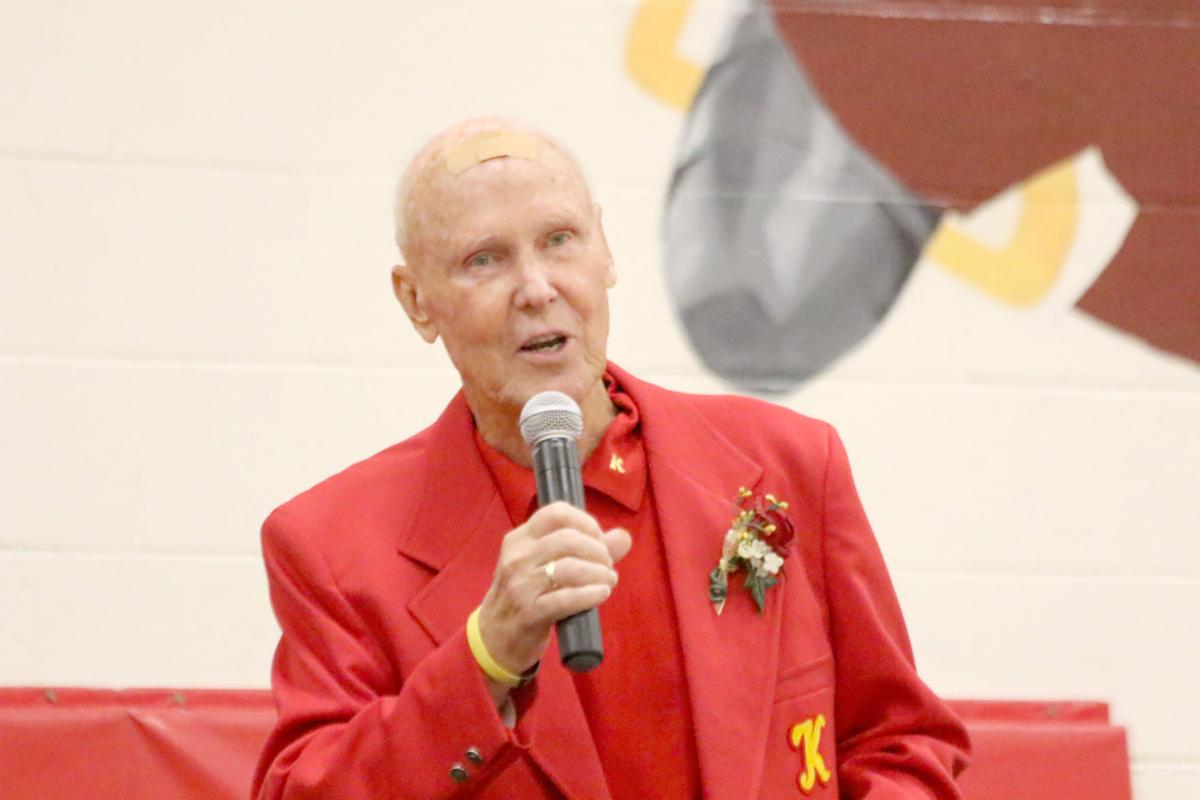 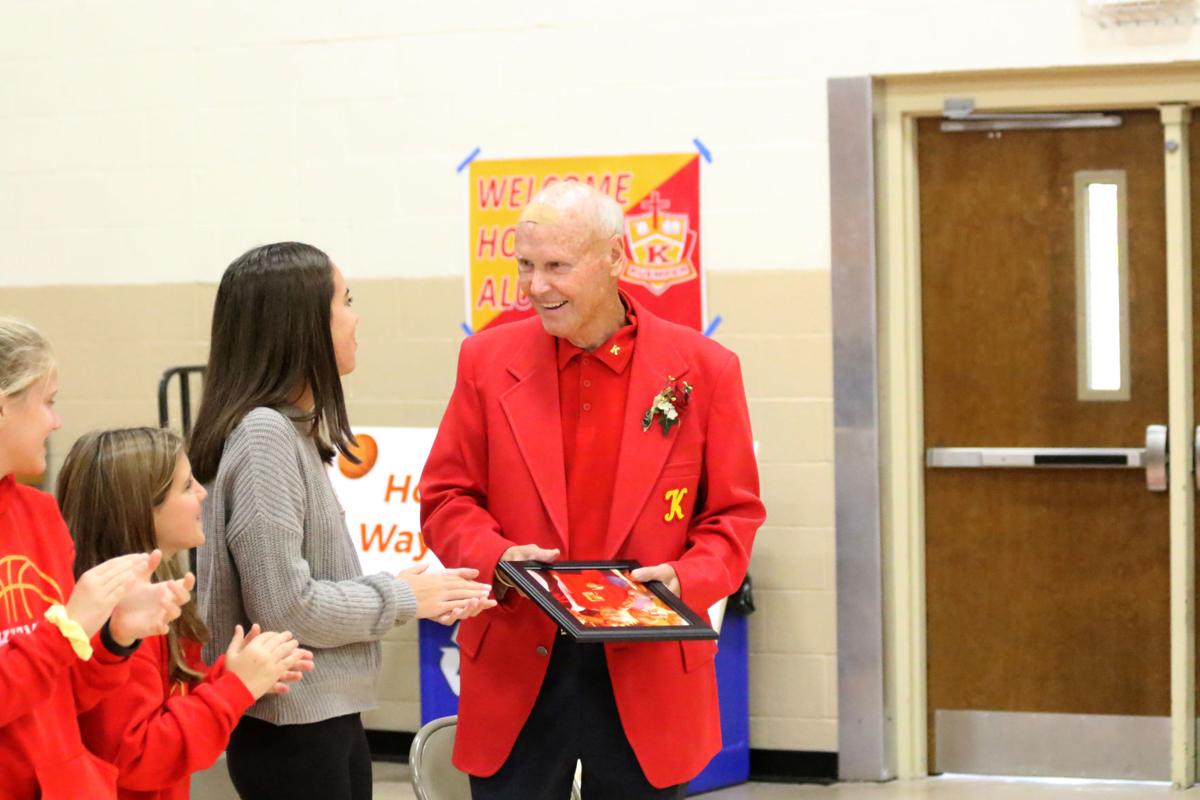 LARRY DEVINE | TIMES HERALD Former Kuemper Catholic High School coach and teacher Wayne Chandlee was honored guest at Kuemper's homecoming. His three sons, daughter and a number of his grandchildren attended the pep rally Friday afternoon, Sept. 27, where Chandlee was saluted. A story and more photos of Chandlee's return will be published in a future edition.

Wayne Chandlee (second from right), coach of Kuemper's 1985 state basketball championship team, enjoys a reunion with players from the team, (from left) Brian David, Nick Nurse and Frank Molak. Chandlee was honored guest at Kuemper homecoming, which featured the theme "A Knight Back in Time." Nurse, head coach of the Toronto Raptors, who won the NBA title this spring, presented state-championship rings to all members of Kuemper's 1985 team.

LARRY DEVINE | TIMES HERALD Former Kuemper Catholic High School coach and teacher Wayne Chandlee was honored guest at Kuemper's homecoming. His three sons, daughter and a number of his grandchildren attended the pep rally Friday afternoon, Sept. 27, where Chandlee was saluted. A story and more photos of Chandlee's return will be published in a future edition.

And he was a little extra uptight before taking the Knights to the 1985 State Tournament. For instance, he kicked his players out of a raucous volleyball matches that were going on in the Kuemper gym the Sunday before the tournament.

“There must have been 50 people playing, bodies flying all over. They were having a lot of fun, but there was a lot of stuff that could have gotten them hurt, so I kicked all my guys out, which didn’t go well, but at least they were able to play (at State),” Chandlee recalled.

And a day before the tournament started, Chandlee tossed a star player from practice for joking with a teammate while the coach was talking to the team.

During Kuemper’s recent homecoming weekend, Chandlee took a lot of good-natured ribbing when he was reminded of those incidents and more in a late-night get-together with a number of players from that 1984-85 team, which went on to produce Kuemper’s only boys state basketball championship.

Chandlee was honored guest at the pep rally, parade and football game on Friday, Sept. 27. He visited for the weekend from his home in Dubuque and was joined by sons Britt from Elmhurst, Illinois, Scott from Indianapolis, Chad from Dubuque and Josh from Phoenix, and daughter Marni from Dubuque as well as nearly all his grandchildren.

From 1974 to ’86 at Kuemper, Chandlee taught English and coached basketball, golf and tennis. During 12 seasons, his basketball teams racked up a 199-76 record, winning 72% of their games. They captured the Class 3A state championship in 1985 with a 23-2 mark, including 21 consecutive victories and outscoring opponents by whopping margins. Kuemper teams under Chandlee also played in State Tournaments in 1976, ’78 and ’79, finishing fourth each time. Chandlee concluded his career at Dubuque Senior High School, where his basketball teams compiled a 116-121 record, and he finished overall at 315-197 record (61.5% winning mark). He was inducted into the Iowa High School Athletic Association Coaches Hall of Fame in 1984.

Chandlee said of Kuemper rolling out the red carpet for him during the “Knights Back in Time” homecoming theme, “It was a fun weekend. Kuemper was great to me. I even got to see a couple of players from the very first team I was there. It was a magical weekend. Kuemper did a great job.”

Chandlee not only visited the school but also toured town to see the two homes on Main Street in Rolling Hills where his family lived in over the years, the Recreation Center, the renovated football stadium and the new Kuemper Field House, which opened a couple of years ago.

“They really fixed that up fantastic,” Chandlee said of the field house. “I can’t believe they have two tennis courts and basketball courts. What they did is fantastic.”

Chandlee said he’ll always have fond memories of Carroll and teaching and coaching at Kuemper.

On Thursday night of homecoming week, Chandlee got together with Brian David, Roger Gehling, Frank Molak and Nick Nurse, starting players from the 1985 title team. And they swapped stories and laughs until well into the next morning.

“Mostly they just told things I did wrong,” Chandlee said with a laugh. “They told me how mean I was and how I did this and that. But I see it a little differently. ... Mostly they just roasted me. We had a lot of fun. I still think of them as kids, but they’re not kids anymore.”

He said of keeping a tight rein on his team before the 1985 tournament, “I guess I was always watching out for things.”

He added, “They were obviously really good players, and they were fun kids, too. All the kids I had at Kuemper were fun. These guys were not only great players, but they were funny. And it’s amazing how close they still are today.”

Chandlee’s coaching style and lessons made a particularly big impression on one of the starters from the state-championship team, floor leader Nurse. Nurse went on to a solid playing career at the University of Northern Iowa. But it’s in his own coaching career where he’s climbed to the pinnacle of basketball success. He paid his dues serving in more than a dozen college and professional coaching positions before he was promoted in 2018 from assistant coach of the NBA’s Toronto Raptors to the team’s head coach. Then last spring, the Raptors surprised the basketball world by winning the NBA crown, knocking off the Golden State Warriors, who had won the title three out of the previous four years.

Following the homecoming pep rally, where he did a little more roasting of his former coach, Nurse said in a visit with the Times Herald that he’s had made many different stops in the basketball world, and Chandlee is still “one of the finest coaches I’ve ever been around.”

“A lot of the basketball I learned from him I still teach today, still use a lot of the drills, a lot of the same teaching methods, and it really was an incredible foundation for my coaching success,” Nurse said, adding, “He was tough and very disciplined, very organized, very serious. He knew what he wanted and demanded 100-percent attention and 100-percent effort.”

Like his old coach, Nurse said, he emphasizes fundamentals: defense, screening, getting through screens, and more.

He even finds himself repeating lines he heard from Chandlee such as, “You can pass too much, dribble too much, and shoot too much, but you can never rebound too much.”

Nurse continued, “He knew that defense was really going to be the key to winning, and he knew how to set that vision and get a plan to execute. That’s a feeling I’ve certainly taken with me. It’s not easy to get everybody to play that kind of defense, but it usually yields really good results.”

The Chandlee-Nurse bond has remained so strong that over the years Nurse has invited his former coach to help him at preseason camps with the NBA D League Iowa Energy and Rio Grande Vipers and last year with the Raptors.

For his part, Chandlee said, “When I went to the Energy and Vipers, I think I made a contribution. Last year I tried to make a contribution with the Raptors, but what do you teach Kawhi Leonard (the NBA Finals most valuable player) and some of those people? They are what they are. Leonard was probably one of the most fundamentally sound and hardest-working players I’ve ever seen.”

Chandlee said he’s gratified that Nurse uses a number of the drills today that he learned at Kuemper.

“When you get right down to it, basketball is not all that complicated,” he said. “You have to dribble, you have to shoot, you have to pass, you have to play defense, and you have to rebound. There are only so many ways you can do those things.”

Chandlee said of his game plan, “I was never a very smart person, but the one thing I did, I was a big-time fundamentals coach. Whereas many coaches have two, three, four different offenses and five different defenses, we basically had one patterned offense, and we played man-to-man defense 98 percent of the time. I had a lot of people put me down for that, but when it came down to it, we were able to run our offense. Coaches spent a lot of (practice) time on our offense, which was fine because they still couldn’t run it like we did.”

Opposing coaches knew exactly what they had to do against Kuemper, Chandlee noted, “but it wasn’t easy to beat us.”

At Kuemper, Chandlee said, he was fortunate to land in a place that’s built a remarkable tradition of basketball success.

“We had a lot of good players,” he said. “When I came there Vern Henkenius had done really well coaching. I came, and we had decent success. When I left, Al Koster took over, and he did very well. ... It was a combination of good players, and the players always had a good work ethic.”

“The support was unbelievable,” Chandlee said. “You’d go to the gym, and you could hardly get a set there most nights if you weren’t there early.”

Chandlee will celebrate his 80th birthday on Nov. 6. He played a lot of tennis when he lived in Carroll and still takes to the court about once a week. His new game is pickleball, a sport that’s soared in popularity in Dubuque, he said, and he and his wife, Patty, play three or four times a week.

Chandlee also enjoys fishing and golf with fellow former Kuemper teacher and coach Al Koster, who’s also retired and lives in Dubuque. Koster was Kuemper sophomore coach when Chandlee was varsity coach and moved up to the head coach position after Chandlee went to Dubuque Senior. Koster is also a Hall of Fame coach.

Chandlee remarried about six years ago. His first wife, Judi, died of cancer in 2011 at age 64. Judi retired as a teacher in Dubuque, and in Carroll she operated an in-home preschool. The family a couple of years ago began a foundation in Judi’s memory. The Judi Chandlee Tribute to Teachers Grant Program awards Dubuque teachers funds for supplies, equipment and innovative educational experiences.

The annual grant program is primarily funded by the Chandlee family. Donations have also been received from private individuals, school district staff, and local businesses.

The Toronto Raptors, coached by 1985 Kuemper Catholic High School graduate Nick Nurse, will open defense of their NBA crown when they host the…