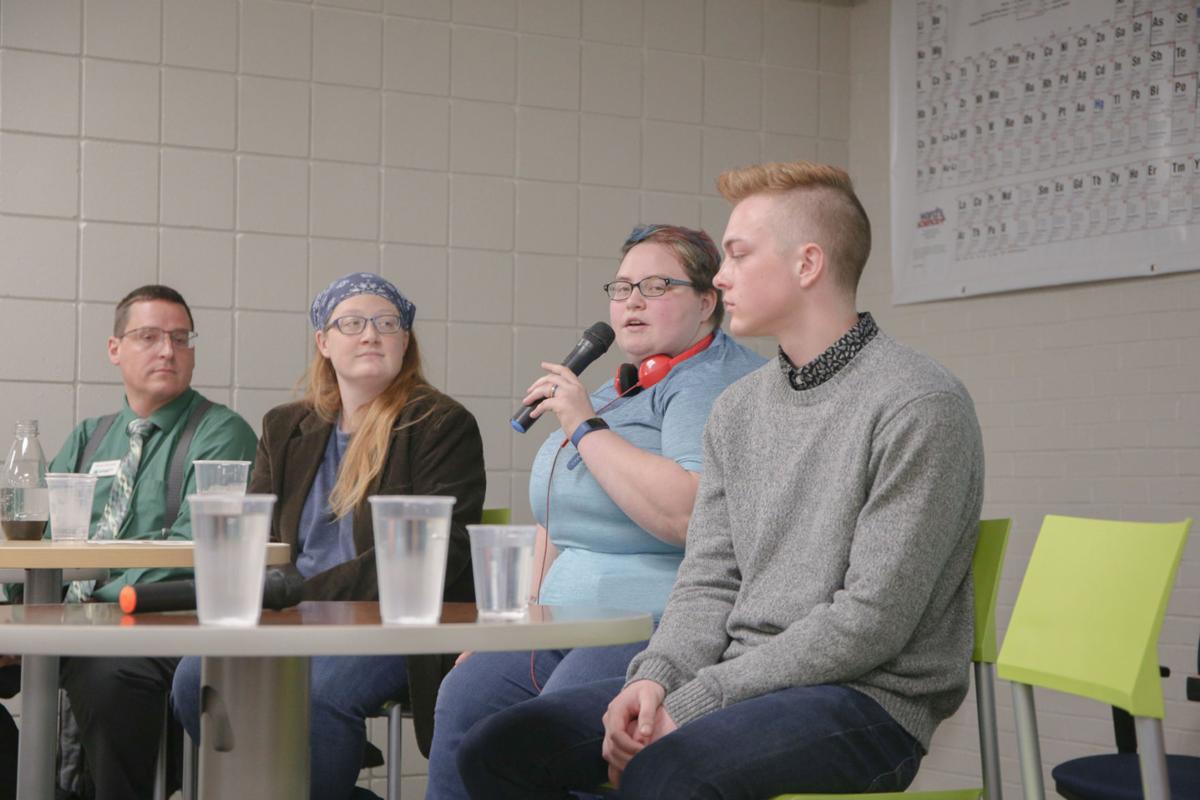 Taylor Sturm (second from right), a student at Des Moines Area Community in Carroll who identifies as demi-gender, non-binary, transgender male and uses the pronouns they and them, speaks about the importance of being accepting and never assuming someone’s gender during the “WE INCLUDE” speaker panel Wednesday afternoon. They are joined by panelists (from left) Jonathon Pogge-Weaver, Bethany Sweeney and Garrett Shirbroun. 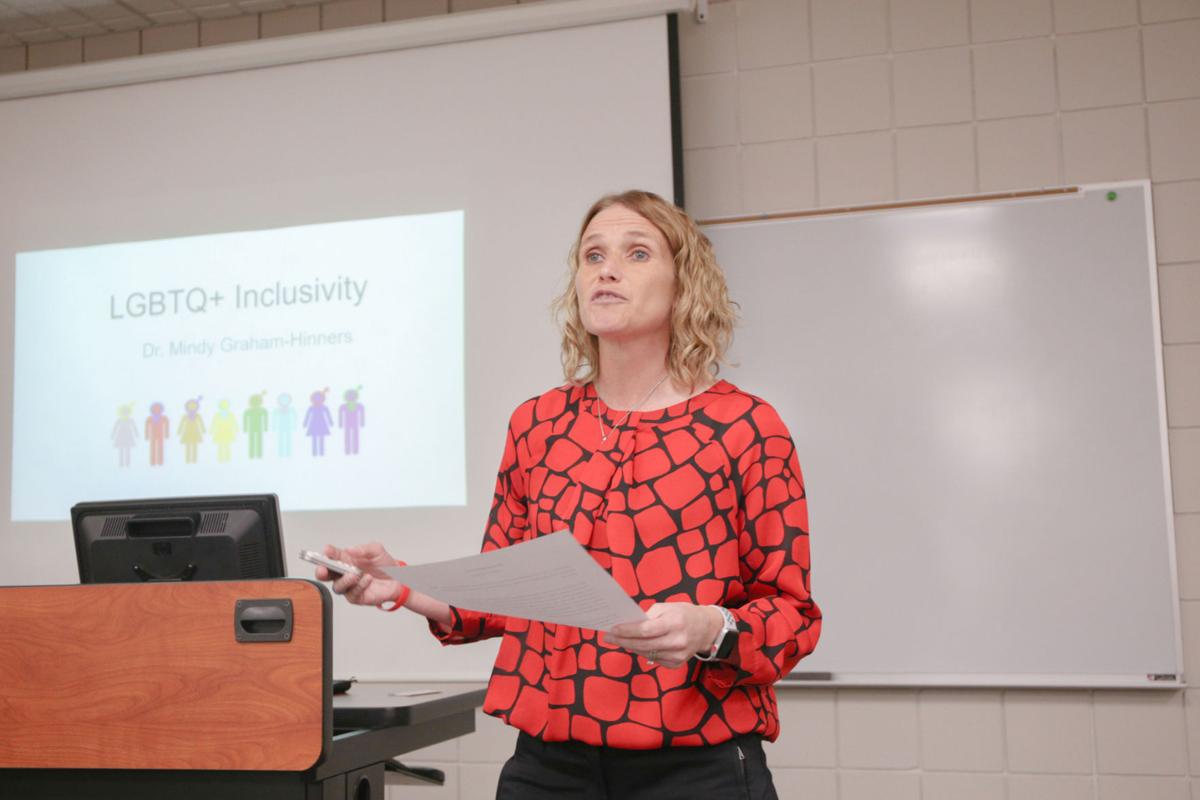 Mindy Graham-Hinners, a psychology instructor at DMACC in Carroll, speaks about the importance of inclusivity in the LGBTQ+ community.

Taylor Sturm (second from right), a student at Des Moines Area Community in Carroll who identifies as demi-gender, non-binary, transgender male and uses the pronouns they and them, speaks about the importance of being accepting and never assuming someone’s gender during the “WE INCLUDE” speaker panel Wednesday afternoon. They are joined by panelists (from left) Jonathon Pogge-Weaver, Bethany Sweeney and Garrett Shirbroun.

Mindy Graham-Hinners, a psychology instructor at DMACC in Carroll, speaks about the importance of inclusivity in the LGBTQ+ community.

At downtown restaurants and bars, two restrooms are open to the public: men’s and women’s.

When parents sign their children up for sports, the form asks for signatures from a mom and a dad.

Inside the doctor’s office, medical paperwork asks its patients to mark their gender. The options are either male or female.

But what if the person using the public restroom does not identify with either gender? Or the kid playing soccer has two dads or two moms? How can a person correctly fill out paperwork if there is no “non-binary” option to check?

During a panel hosted by Des Moines Area Community College in Carroll focused on LGBTQ+ people and issues, Dr. Mindy Graham-Hinners, a psychology instructor at DMACC in Carroll, said that more than just two genders exist, but society doesn’t always see it that way.

“As a society, we like to construct words, because it makes our lives easier when we can categorize things, because it makes us understand things better,” she said. “We like to categorize things, so we have constructed this idea of gender as a social construct that we use to classify people as either men or women or somebody with another identity, depending on how they identify themselves.”

On Wednesday afternoon, DMACC in Carroll held its second of a three-part “WE INCLUDE” speaker panel, organized by Phi Theta Kappa honor society Wednesday afternoon. The previous panel focused on people with Autism Spectrum Disorder, and the final event, being hosted by DMACC human services and psychology instructor Teresa Friesen at 12 p.m. Nov. 21, will focus on homelessness.

During Wednesday’s panel, Graham-Hinners spoke about the importance of inclusivity and why everyone — whether they identify as lesbian, gay, bisexual, transgender, queer, questioning or any other identity — should feel accepted in every aspect of life.

“Belonging is a human need, and there are harmful consequences that can result from not having this belonging,” she said. “Not having a belongingness to a community — it’s one thing to feel like you belong with your family and close friends, but we also need belongingness in a larger scale.”

It’s human nature and part of our code to want to have a sense of belonging, Graham-Hinners said. Without that sense of belonging — either to a community, family or friend group — people may develop depressive feelings, she said.

“You feel it yourself, it’s your own internal belonging,” Graham-Hinners said. “Other people may look at you and say ‘What are you talking about? You belong.’ But if you don’t feel it, your perception may not be there.”

This is why the subject of inclusivity is important; this is why it matters, Graham-Hinners said.

During the event, panelists Jonathon Pogge-Weaver, Taylor Sturm, Bethany Sweeney and Garrett Shirbroun, spoke about the importance of the LGBTQ+ community and why it is crucial to never stereotype another person or make assumptions about someone’s gender.

“The main thing to do would be to think about how you might be assuming that people are a certain way and then work on backing away from those types of assumptions,” said Sweeney, an English and history instructor at DMACC, who identifies as queer and polyamorous and uses the pronouns she and hers. “There are all these little things — like how many times have you gone to a restaurant, and there are single-stalled bathrooms and one is labeled male and one is labeled female?”

When Pogge-Weaver’s daughter was younger, he had difficulties finding a baby changing station he and his husband Mike could use — they were all in the women’s restroom. Now those years have passed, but they face other obstacles.

“Almost everything we get involved in, we will be filling out a form that will say ‘father information’ or ‘mother information’ instead of parent,” said Pogge-Weaver, who uses the pronouns he and him.

Although society has come a long way from where it was 20 or 30 years ago, there is still a lot more room for growth, but participants said the day of inclusivity and talk of acceptance was a good place to start.

“I’ve realized the kinds of struggles of people who were in my situation 20 years ago are having today,” Sweeney said. “I have periodically encountered inclusivity and a lot of support, especially here at DMACC, but there have been times where I have encountered less than inclusivity in the community, so being willing to speak out about that and have these conversations will hopefully help these people be more aware of those issues.”