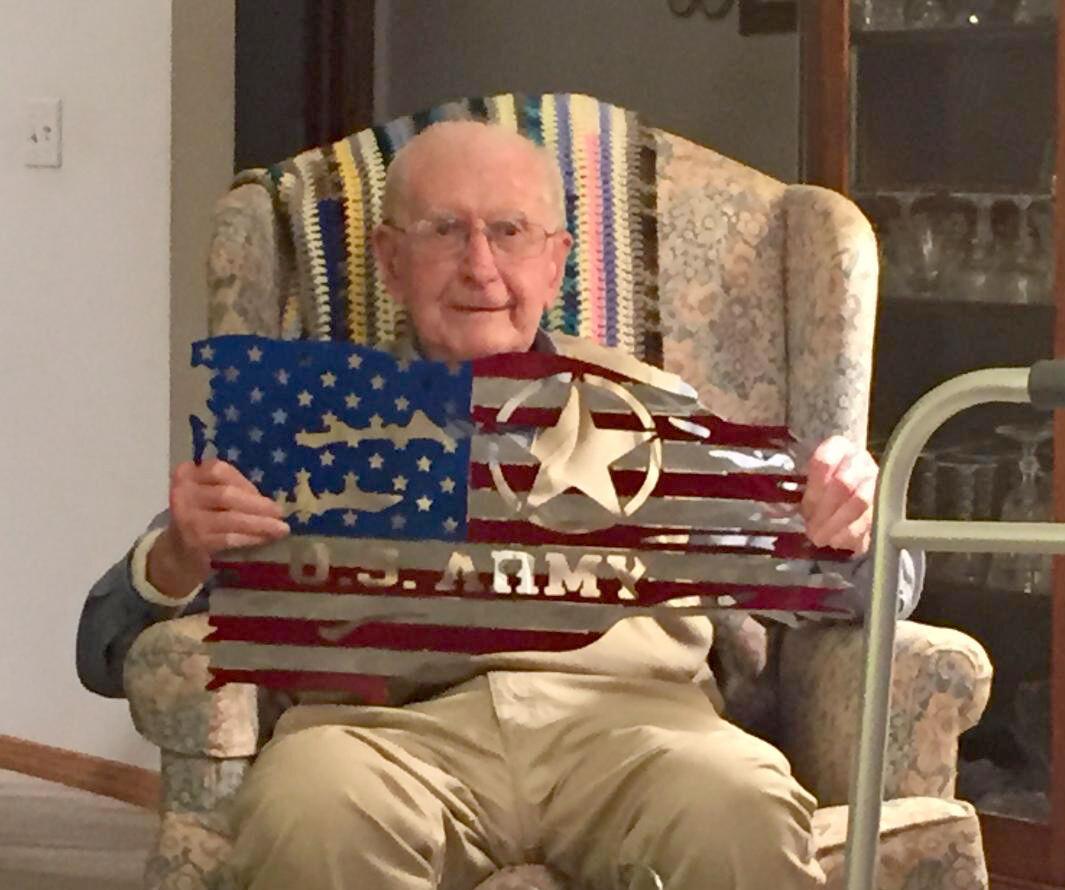 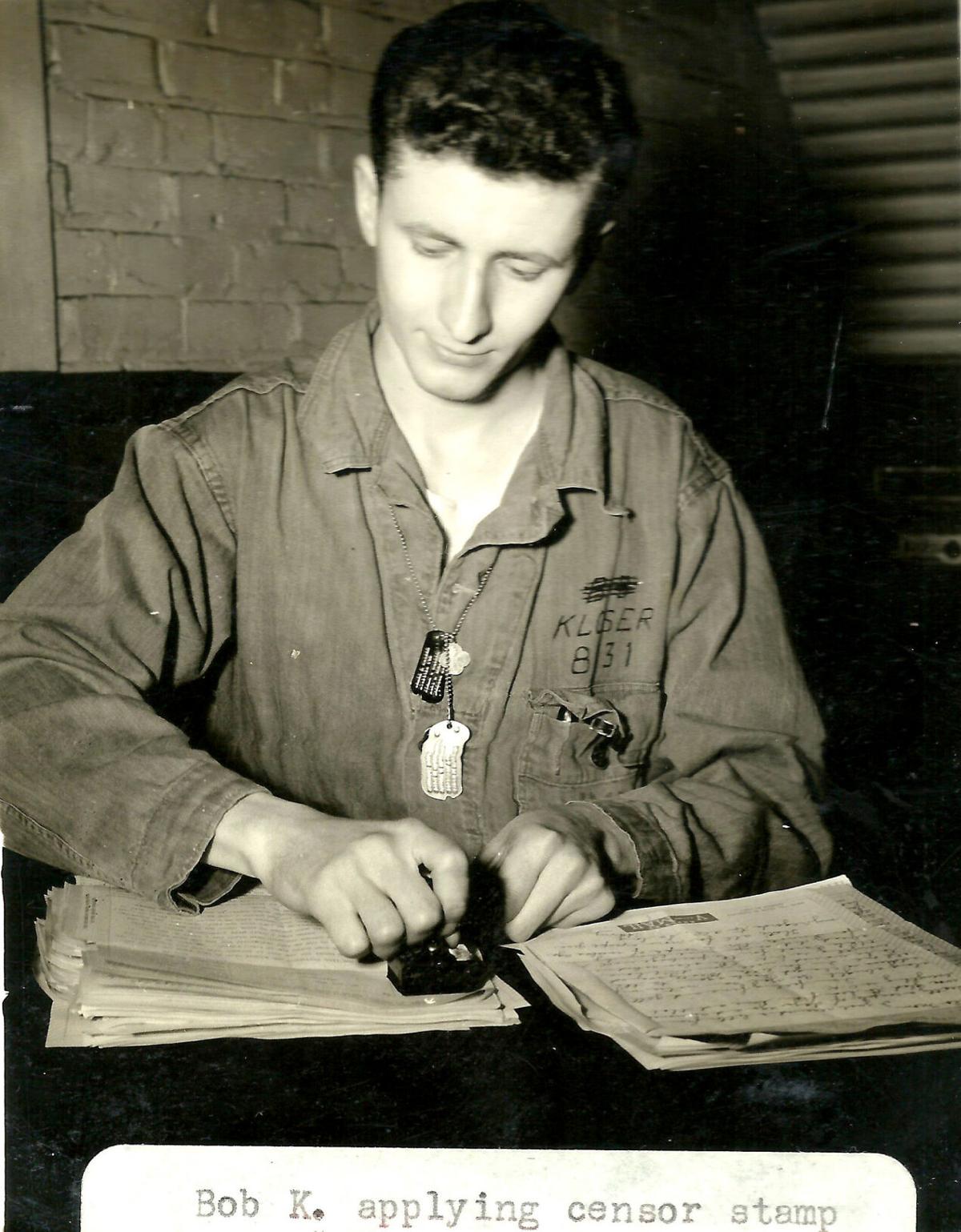 Bob Kloser working as a postal clerk in 1942 in England. 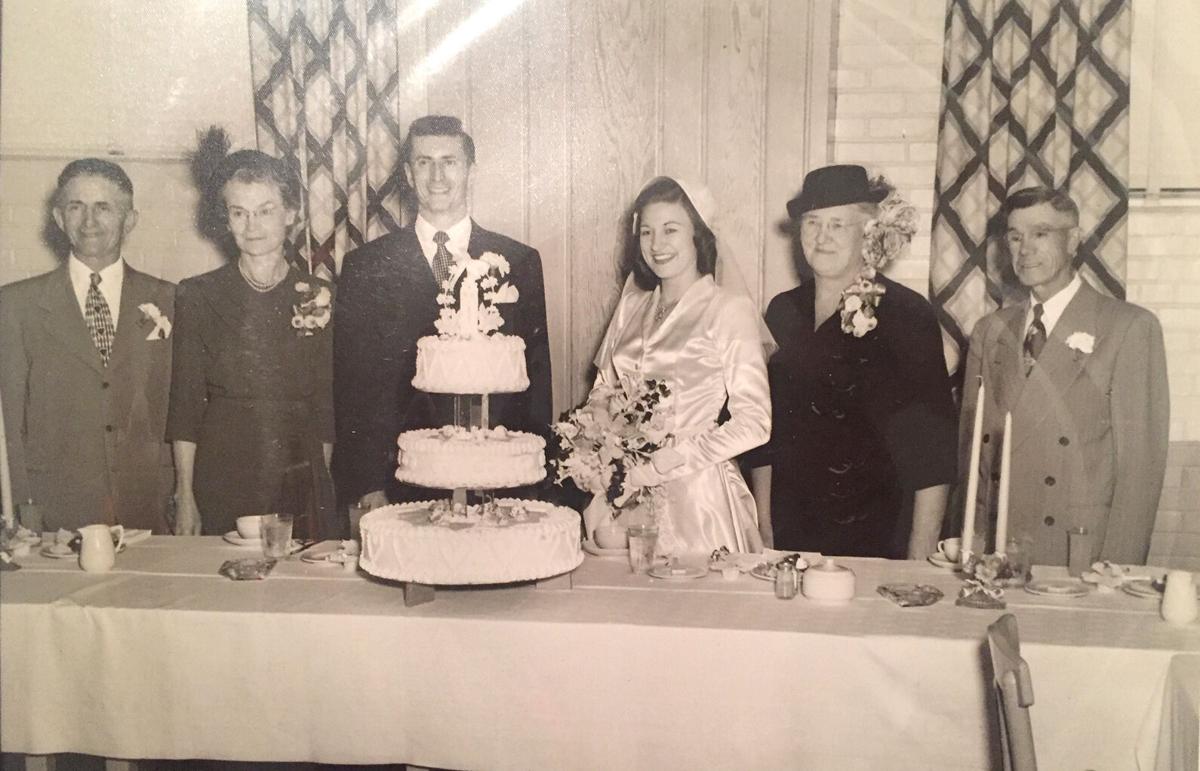 Bob and Mary Kloser pictured on their wedding day with their parents. Pictured are (from left) Frank Kloser, Genevieve Kloser, Bob Kloser, Mary Wells Kloser, Elizabeth Wells and Fred Wells. Bob and Mary were married on September 21, 1950, at St. Joseph’s Church in Carroll. They were the parents of seven children. 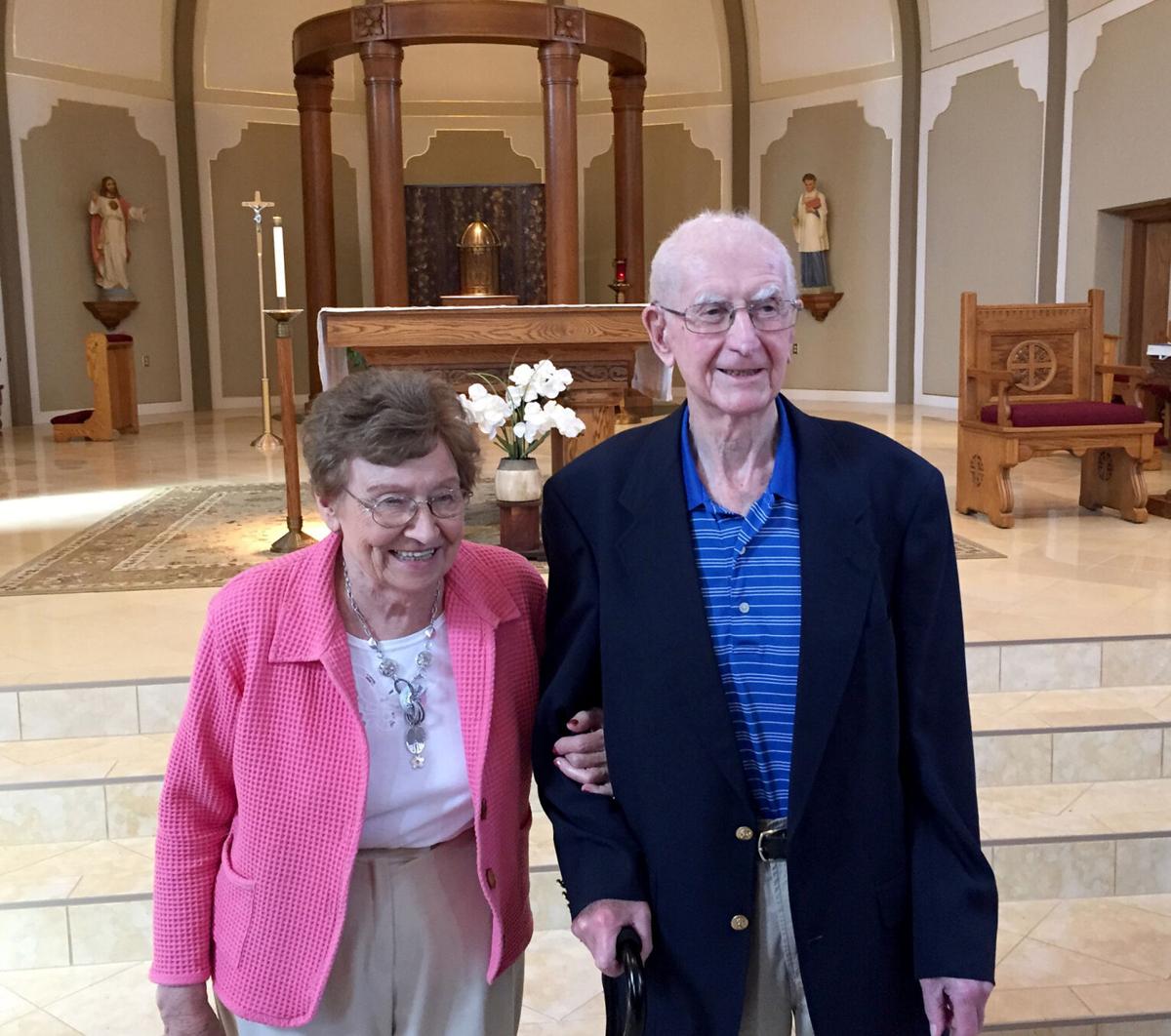 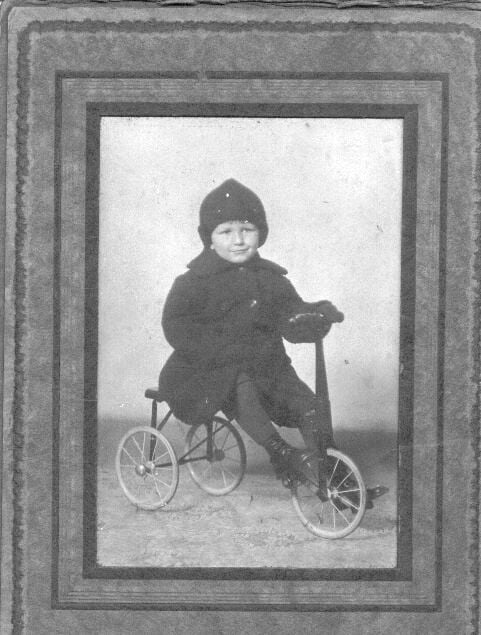 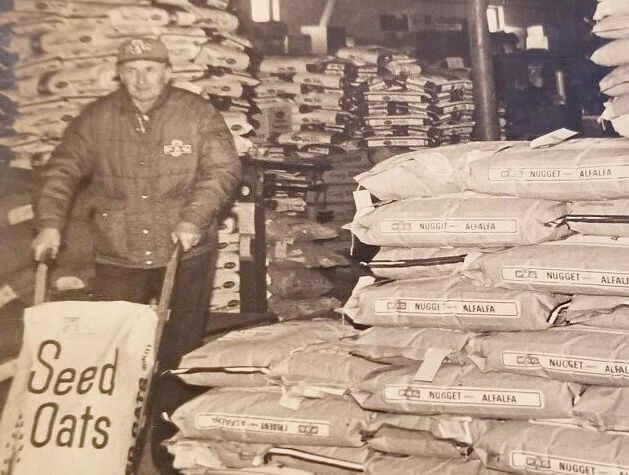 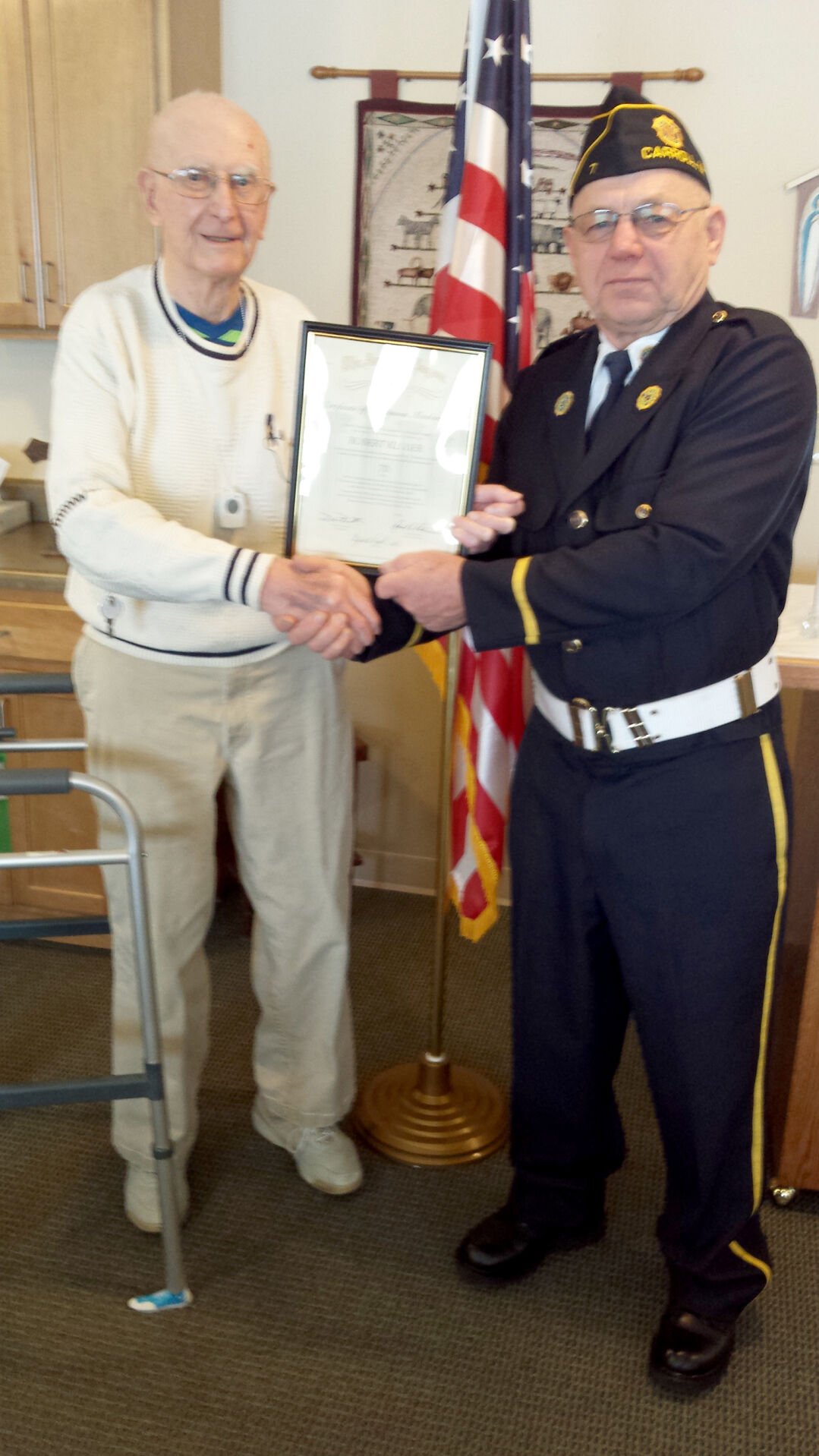 Bob Kloser is presented with an American Legion Award for his years of membership in the local Legion and for serving in the Honor Guard. The award was presented by Commander Lynn Vogl in 2016. 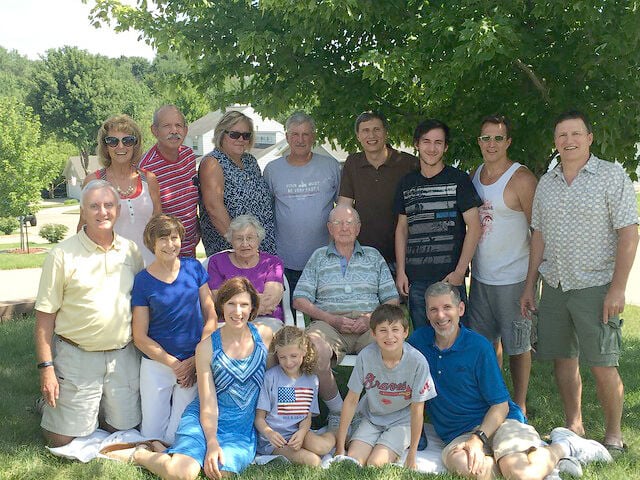 Mary and Bob Kloser with their children and grandchildren in 2016.

Bob Kloser working as a postal clerk in 1942 in England.

Bob and Mary Kloser pictured on their wedding day with their parents. Pictured are (from left) Frank Kloser, Genevieve Kloser, Bob Kloser, Mary Wells Kloser, Elizabeth Wells and Fred Wells. Bob and Mary were married on September 21, 1950, at St. Joseph’s Church in Carroll. They were the parents of seven children.

Bob Kloser is presented with an American Legion Award for his years of membership in the local Legion and for serving in the Honor Guard. The award was presented by Commander Lynn Vogl in 2016.

Mary and Bob Kloser with their children and grandchildren in 2016.

Bob Kloser can look back on many interesting highlights in his well-lived 100 years.

Born on Feb. 11, 1921, Bob comes from good, hardy stock as his parents, Frank and Genevieve Kloser, of Carroll, also reached the century mark. Frank Kloser died at age 100 in 1989, and Genevieve Kloser passed away at age 101 in 1993. Bob’s health is relatively quite good as he approaches the 100-year mark, and he is able to enjoy reading and television programs and visiting with family.

Bob still has a good sense of humor, always ready with a quip. When asked how it felt to be 100 years old, he replied, “Damned old!” He said a birthday party would be OK, because “any party is a good party.”

Bob has lived at Swan Place since 2015. Mary, his wife of almost 69 years, passed away in 2019. He will receive his second COVID-19 vaccination a day before his birthday. Soon after, the hope is that he will have some freedom to venture outside of his residence, and perhaps have a safe birthday celebration with his children.

With a century of living, Bob’s life spans a multitude of challenges and great changes not only in his life, but the world. The years from 1921 to 2021 saw several wars, economic ups and downs, 19 presidential administrations, and many advances in science, medicine and technology. He was born shortly after the worldwide flu pandemic of 1918 and hopes the current pandemic is over soon.

Bob was Frank and Genevieve’s only child, and was about 9 years old when the family moved from their home in Missouri Valley, Iowa, to Carroll in 1930. His father was named Carroll County Iowa State Extension director at that time. In 1939, his father started Kloser Seed Store, and Bob, then about 19, went to work in the family business. To his credit, Bob inherited his father’s amiable grin and congenial way with people that served them well in the Kloser Seed Store business, and for Bob, all through his life dealing with people.

He enlisted in the Army Air Force shortly after the Pearl Harbor bombing and was stationed in England for the entirety of his service. Upon return to Carroll, he rejoined his father in operation of Kloser Seed Store. When Frank retired, Bob assumed ownership of the store.

Bob’s wife, Mary Ellen Wells, grew up on a farm west of Carroll and eventually went to work for the local telephone company. On her walks to work from her residence on the east side of town, she would pass Kloser Seed Store. Naturally, Bob and Mary noticed each other. They were married on Sept. 21, 1950, at St. Joseph Catholic Church in Carroll and were the parents of seven children.

The Kloser children include:

— Kathy and her husband, Joe Stein, of Omaha, Nebraska

— Mary Beth and her husband, Greg Dietz, of Fairview, Texas

— Phil and his wife, Nancy, of Glenwood, Iowa

— Rick, a mathematics professor at the University of St. Francis in Joliet, Illinois

— Joe, his wife, Tammy, and sons Joshua and Jacob of Peoria, Arizona

Even with the responsibilities of running a growing business and raising a large family, Bob found time for community service. Church and school were a priority — he served as a member of St. Lawrence Parish Parents Club and president of the Kuemper High School Parents Club. He was active in the Knights of Columbus, served on the Chamber of Commerce Board of Directors, and was chosen as “Boss of the Year” by the Carroll Jaycees. He was a member of the Maurice Dunn Post No. 7, American Legion Honor Guard beginning in 1948 and served a term as second vice commander of the post. He also served as chairman of the Legion Boy Scouts Committee from 1948 to 1960.

Kloser Seed Store eventually moved to a main office along Highway 30 near the Wernimont Building and across the road from where Drees Oil Co. was previously located. As the business expanded, a fertilizer plant and maintenance shop were located near Highway 30 on North West Street. In the mid-1980s, Walmart was interested in opening a store in Carroll and desired the property where the fertilizer plant was situated. About the same time, the Iowa Department of Transportation wished to reconfigure Highway 30 where the store office was located. Bob was nearing the usual retirement age, and given that the farm economy was in the midst of a difficult period, all signs suggested it was time to call an end to Kloser Seed Store.

For their 40th wedding anniversary in 1990, Bob and Mary joined a tour group going to England and had the opportunity to tour his old Army base. Other trips over the years included visits to Spain, Hawaii and the Caribbean. They also enjoyed “snowbirding” for many winters in the Phoenix area, where son Joe and his family live.

For a Christmas present this past year, Bob received an Amazon Echo Show and now can have video chats with his children. He continues to read the Carroll and Omaha newspapers. He noted, with his wry humor, “When you get to be a hundred, you’re just hanging around — getting in people’s way. I’ll try to put up with myself.”

Looking handsome as always Bob! Wishing you a Happy 100th Birthday and a blessed year!!