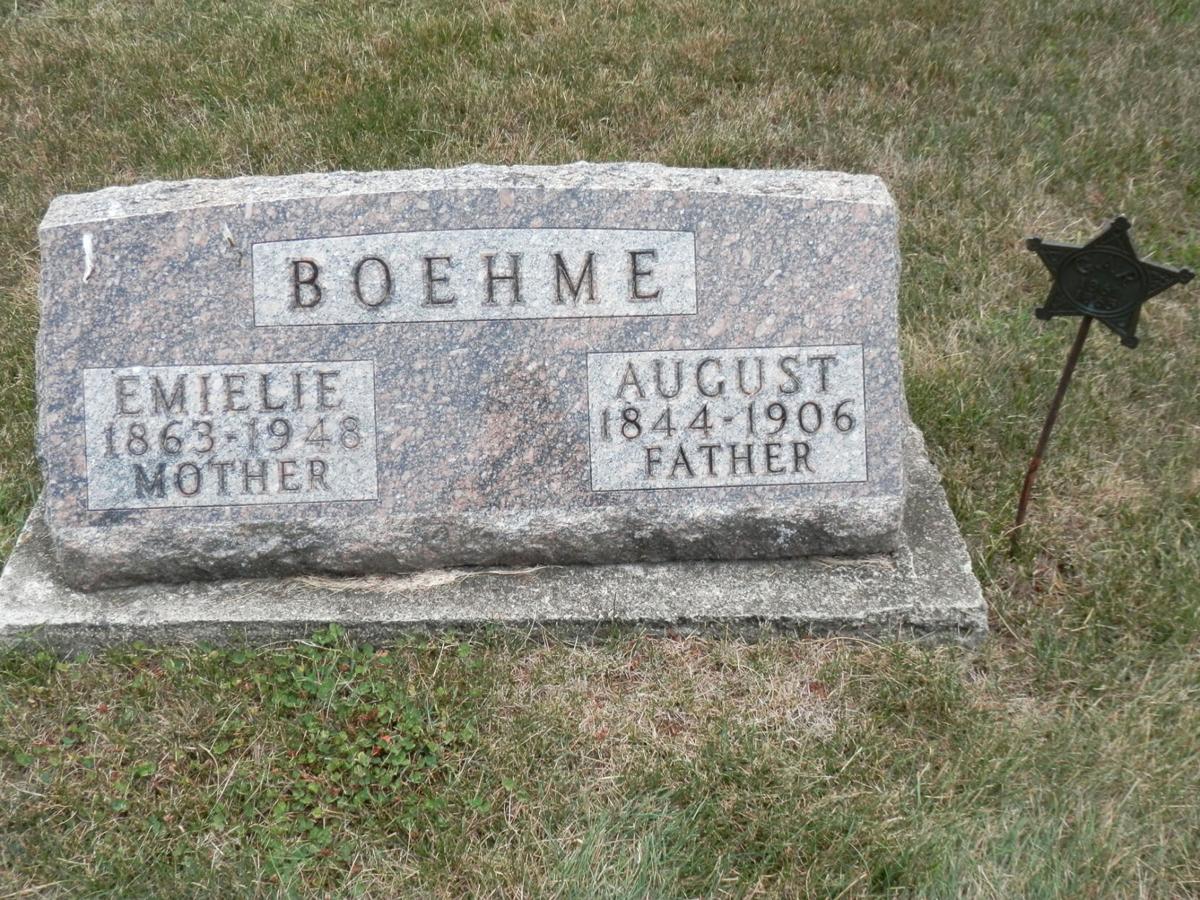 The lone Confederate soldier buried in Carroll, August Boehme’s almost-72-year journey to Carroll’s cemetery extended over three continents. He was born September 11, 1834 (his grave marker has 1844), in Hamburg, Germany. 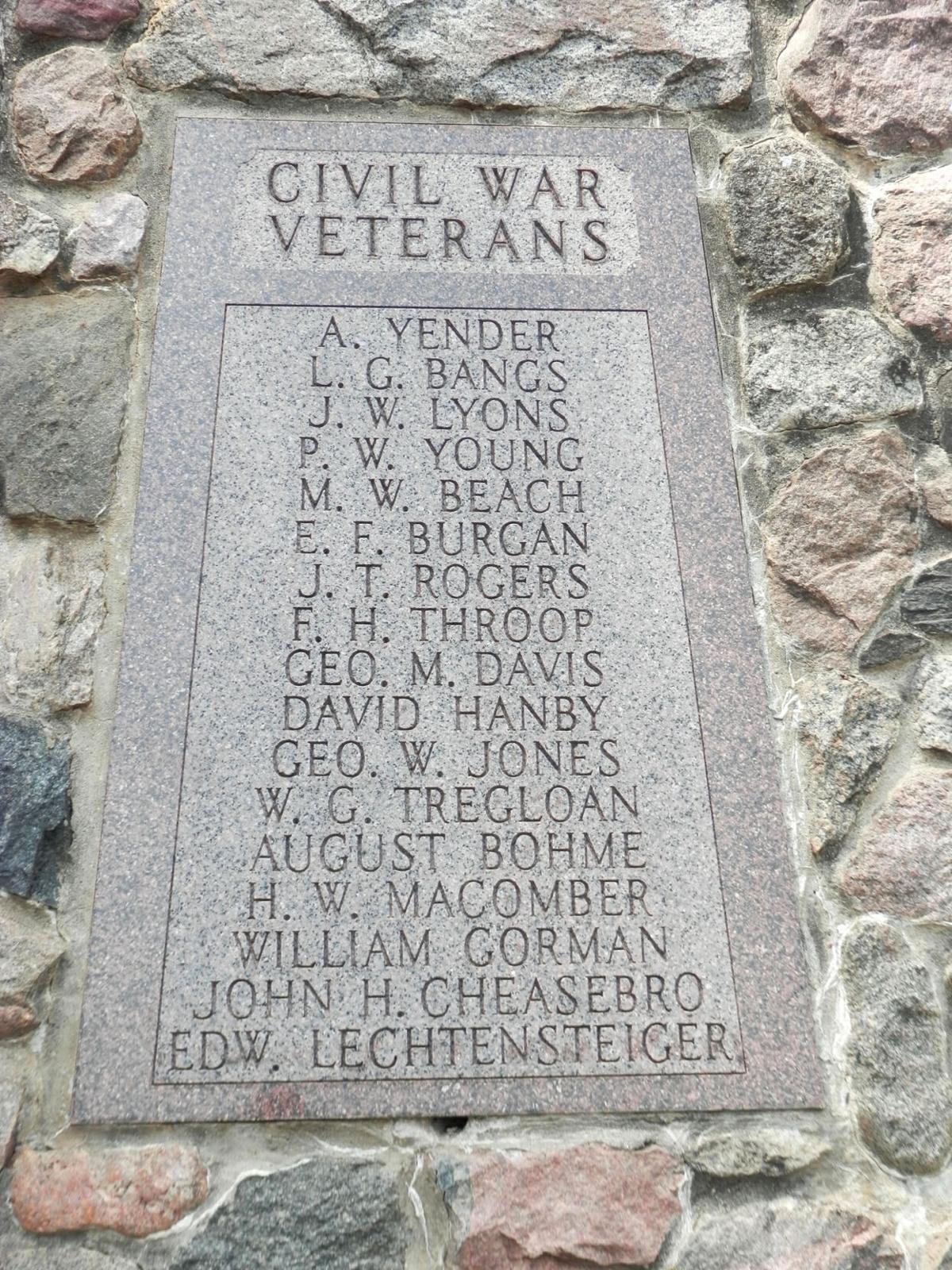 One Confederate soldier is listed among the Civil War veterans buried at the Carroll Cemetery. August Boehme (the correct spelling and the one on his headstone in the cemetery) lived a full life in Carroll after fighting for the South in the Civil War. Note his name is spelled Bohme on the monument. 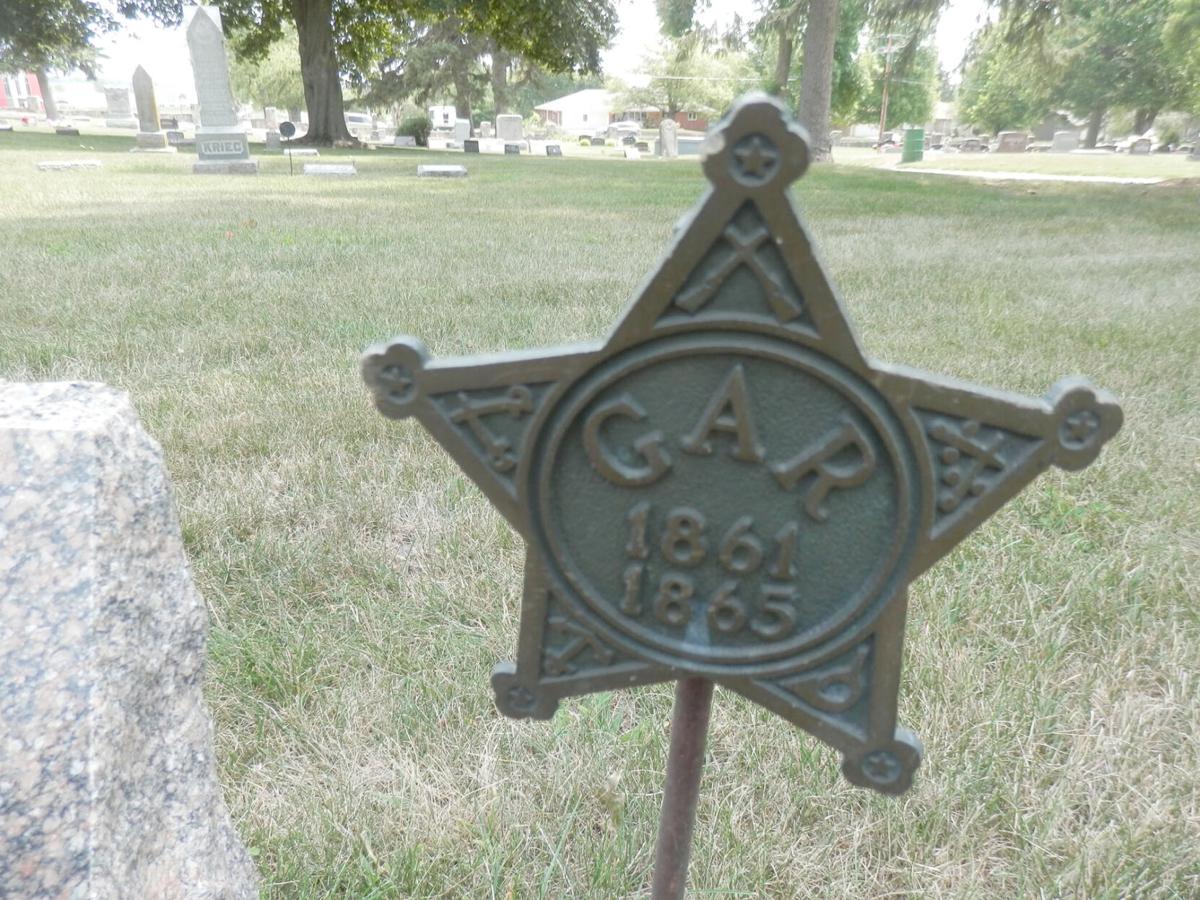 The metal star next to August Boehme’s headstone in Section 2 of the Carroll Cemetery reads “GAR” (Grand Army of the Republic), but it should read “CSA” (Confederate States of America or Confederate States Army).

“The war is over — the rebels are our countrymen again.” —Ulysses S. Grant

The metal star next to August Boehme’s headstone in Section 2 of the Carroll Cemetery reads “GAR” (Grand Army of the Republic), but it should read “CSA” (Confederate States of America or Confederate States Army).

Boehme, a Confederate soldier, is not only buried in the cemetery, but his name appears (as August Bohme) with the 67 names of the Union (GAR) veterans from Carroll on the Civil War Monument in Memorial Circle.

Two years after his death, the June 4, 1908, edition of The Carroll Times notes, “Besides the Union veterans, there also rests at the city cemetery one of the valiant men who wore the gray, August Bohme. About the last Decoration day he spent on earth he joined the men who had fought on the other side in their march to the cemetery. Nor do ‘the boys in blue’ forget the spot where rests one who fought for the ‘lost cause.’ ‘When they laurel the graves of the dead,’ there are blossoms for his memory as well. A newer better era has dawned. Too long have men in sectional antaganism (sic) fought over the battles and raked up the sins of the past. Lincoln wanted ‘to bind up the nation’s wounds’ 43 years ago. … At last, ‘let us have peace’ meets with more generous response.”

He was born Sept. 11, 1834 (his grave marker has 1844), in Hamburg, Germany. His father was a merchant who carried on extensive trade operations with the West Indies. At the age of 16, Boehme was seized with a youthful love of adventure. For a few years he cut off all communication with home, during which time he spent five years in Brazil working on road building projects and adding Spanish to his fund of varied knowledge.

Shortly before the Civil War broke out, he took passage on a fruiter and landed at New Orleans, Louisiana. He enlisted Dec. 21, 1861, in the 20th Louisiana Infantry Company F, Confederate States of America. He fought with the South on the ground of sectionalism, advocacy of state rights and love of adventure, not because he shared the views of the slaveholders, according to reports stemming from interviews through the years with Boehme.

Because of his excellent penmanship and superior education, he performed mostly clerical duties for officers. At the close of the war, he ranked as sergeant major. Captured June 22, 1864, near Atlanta, Georgia, Boehme was released from prison Jan. 10, 1865, after swearing allegiance to the United States.

He remained in different parts of the South, finally coming north from Texas to Kansas, where he met a Carroll County man, John Gartner, whom he accompanied to Carroll in the early 1880s. He began teaching school, and after a few years he became an employee of Judge George W. Paine’s abstract office, where he transcribed records for Carroll County property titles.

His handwriting on courthouse and county records is a memorial of his superior penmanship. Toward the end of his life, his failing eyesight forced him to abandon that work.

While a resident in Carroll, he actively participated in the life of the town. In the summer of 1883, he was one of the 23 teachers attending the Carroll County Normal (Teachers) Institute. Three years later, he portrayed the burgermeister (mayor) in a German Literary and Dramatic Society’s production. In 1888, he bought the fence enclosing the baseball field and moved it to the east side, where it was used to surround an ice skating rink. In February 1891, he entertained the GAR members “with thrilling tales of the rebellion from the confederate point of view.” He was appointed deputy recorder in the county clerk’s office from 1897 to 1902.

Advertised as “one of the most expert and accurate men in this line to be found anywhere,” he drafted a detailed Carroll County map published by The Sentinel in 1901. Real estate transfers in the county ranged from 50 to 75 percent since the previous map had been published; and the platting of the strip along the CNW railroad was complex because of the railroad’s purchase of additional land for the double track extension. The newspaper’s ad said, “Mr. Bohme’s well known accuracy is a guaranty that the work was done right.”

Boehme married Emielie Krueger Oct. 4, 1885, in Carroll. Born in Germany Nov. 23, 1863, she came to the United States when she was about 22 years old. They were the parents of Albert, Gustav, Theresia, Ulricka, Valda, Emeline and LeRoy; three other children, Hilda, Edward and George, preceded their parents in death. Their eldest son died at age 10 of diphtheria in October 1896.

Boehme’s illness, a chronic stomach trouble, extended over the last two years of his life. He died March 1, 1906. His wife, who died March 16, 1948, is buried beside him.

I am still trying to figure out the point of this story. The story sounds like the person who wrote it is still trying to litigate the Civil War (Union vs Rebel and Rebels don't deserve to be buried in any cemetery in the north).

All confederates were traitors to this country. No one should be honoring their efforts in the Civil War. This guy did swear allegiance to the United States but he had to in order to get out or prison. But we should recognize the allegiance and it sounds like he was productive citizen who contributed to his community.

"Traitor" is a very harsh word for this man. He lived and raised his family and worked in Carroll. He paid taxes and supported local business. We lived in Mississippi for a number of years and we were exposed to a different point of view there than what is taught in Schools in the North. These people were protecting their home state and farms. Sherman destroyed the hard working farmers land and crops and burned their homes. They sold and shipped their farm products up North along the railroad that ran from Southern Mississippi to Iowa and Illinois. Sherman destroyed the rail lines and the farmers were loosing everything. I talked with family members whose families lost everthing who still live there where their families farmed. Sherman burned the state capital of Jackson to the ground except for the capital building . To this day the nick name for Jackson is "Chimneville".

Fair comment about the word "traitor". It is a strong word. And the circumstances mentioned the people and property who became collateral damage of the Civil War were horrible. But Sherman was breaking the back of an infrastructure -- the farm products and the cities of the South - that supported a war against the United States and killed half a million people. That war was started and fought by Southerners to maintain slavery -- unconscionable, immoral, anti American economic and social system that requires domination of humans for the benefit of other humans -- not based on merit or deeds but on race. Slavery is antithetical to the Declaration of Independence and the Constitution. I can't think of a more traitorous act than to fight against those principles and his actions in the War should not be celebrated, honored or forgotten. Its why he went to prison. It was only due to the extreme compassion and forgiveness of President Lincoln and General/President Grant that he was not executed. I will commend him for his apparent good work and actions post prison as a citizen of Carroll, of Iowa and the US.