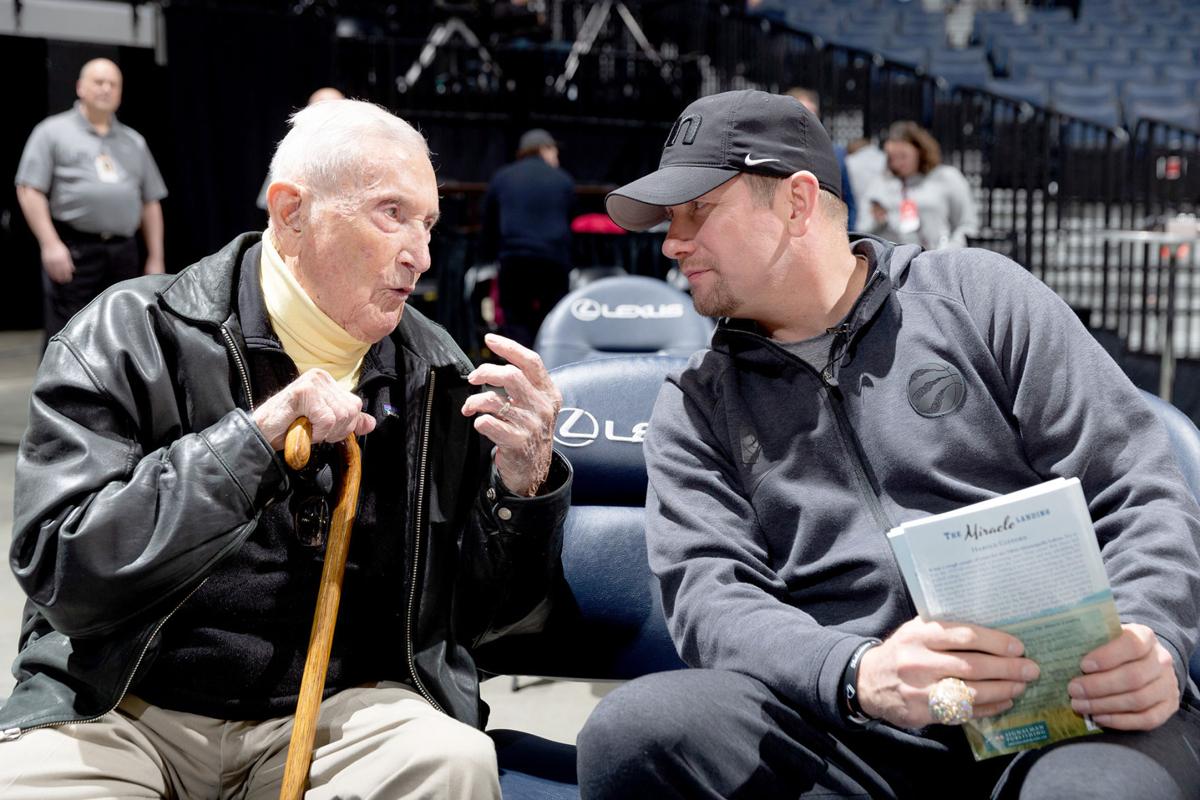 Harold Gifford (left), co-pilot of the DC-3 plane carrying the Minneapolis Lakers basketball team that made a miracle landing just northeast of Carroll early in the morning on Jan. 18, 1960, visits with Toronto Raptors Coach Nick Nurse, a Carroll native. 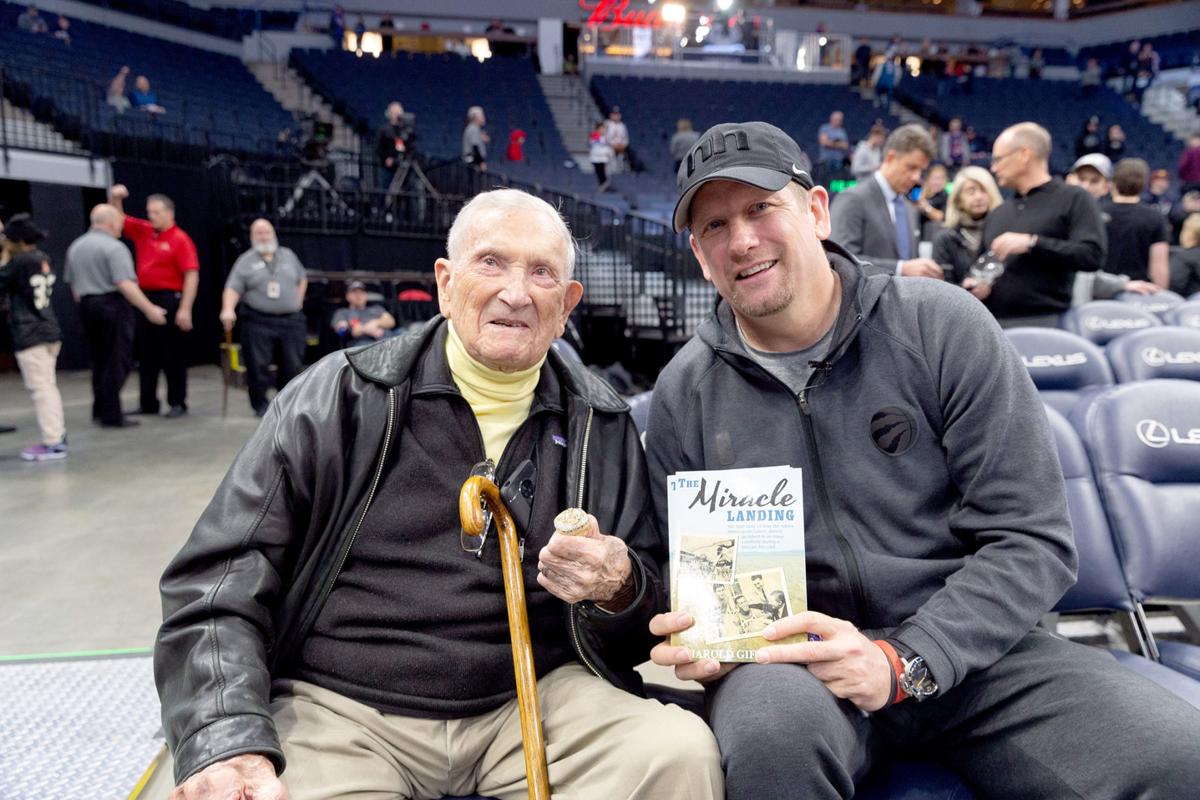 Harold Gifford (left), co-pilot of the DC-3 plane 0carrying the Minneapolis Lakers basketball team that made a miracle landing just northeast of Carroll early in the morning on Jan. 18, 1960, presents a copy of his book to Toronto Raptors Coach Nick Nurse, a Carroll native during a recent game.

How’s this for a “Miracle Landing” long-shot connection?

Carroll native Nick Nurse, head coach of the reigning NBA champion Toronto Raptors, sits down at courtside before his team plays at the Minnesota Timberwolves on Saturday night, Jan. 18, and visits with Harold Gifford, one of three members of the flight crew that may have very well have saved the pro-basketball league with a miracle landing in a cornfield just northeast of Carroll 60 years to the day earlier.

Gifford was co-pilot on the Douglas DC-3 that carried players and coaches of the NBA Minneapolis Lakers. Twenty-three altogether were on the plane, which took off Sunday night, Jan. 17, 1960, from St. Louis, where the Lakers had just lost a game to the St. Louis Hawks.

Electrical failure on the plane, a snowstorm and dwindling fuel supply all combined to turn this into a harrowing flight. The plane just escaped disaster north of Auburn when Gifford hit the power at the last second to avoid crashing into a grove of trees. It was such a close call that a wing tip brushed the treetops.

The plane circled back to Carroll, where residents, who had heard the extremely low-flying plane earlier and knew it was in trouble, had turned on their porch lights to provide some navigational help. Carroll residents’ response proved to be crucial to lighting the way to the miracle landing in a snow-covered field near where Collison housing addition, Fairview Elementary School and St. John Lutheran Church now are located.

Lakers players and coaches and everyone else on the plane walked away safely from the landing, as the plane came to a stop at 1:40 a.m.

That feat may have saved the NBA, which was struggling for survival at the time. The Lakers moved the next year to Los Angeles and soon added Jerry West and others to a roster that already included Elgin Baylor. The Lakers, of course, now are one of the NBA’s marquee teams, over the years featuring Magic Johnson, Kareem Abdul Jabbar, Kobe Bryant, Shaquille O’Neal and many other stars.

Celebrating the 50th anniversary of this remarkable chapter in Carroll history, Laker Court was built at Veterans Park, just west of the landing site. Dedication of the court was held Sept. 13, 2010. Gifford and members of his family attended the ceremony along with Jeanie Buss, controlling owner and president of the Lakers, and Tommy Hawkins, one of the players on the 1960 flight. The Lakers made a large donation to build the court, which sports the team’s purple and gold colors.

Kuemper Catholic School System President John Steffes spearheaded the 50th-anniversary celebration and stepped up again when he saw that the Raptors, coached by Nurse, a 1985 Kuemper High School graduate, would be playing at the Minnesota Timberwolves on the day of the 60th anniversary.

Miracle-flight co-pilot Gifford, now 96, lives in Woodbury, a suburb of St. Paul, near the Timberwolves’ home arena, the Target Center in Minneapolis, and Gifford’s granddaughter Ashley Heinlein is senior director of membership and premium service for the Timberwolves. Steffes contacted Heinlein to arrange the Nurse-Gifford meeting before the game.

Gifford presented Nurse a couple of signed copies of his 2013 book, “The Miracle Landing,” which details every dramatic moment of the flight.

In a phone interview, Gifford recounted that in 1960 there were only eight teams in the NBA, and if the plane had crashed and the Lakers perished, the league might have folded.

“Fortunately I had a knowledge of weather and a lot of flying experience,” Gifford said of the situation.

He added, “I resent anybody calling it a crash. It was nothing more than an unscheduled landing.”

What did Gifford and Nurse visit about?

“Mostly he wanted to hear my story about the flight,” Gifford said, adding, “(Nurse) is a heck of a guy, and he, of course, asked a lot of questions about the story.”

Nurse said in an email to the Times Herald that he already had a copy of the book and has read it, although he enjoyed hearing Gifford recall how he was flying only a few hundred feet above the Carroll area and seeing barns and silos.

Gifford recounted in the phone interview seeing a billboard for Hamm’s — the beer brewed from the land of sky-blue waters — along Highway 71 near Carroll and joked, “That told me we were close to Minnesota, right?”

Gifford said he’s seen a new surge of interest in his book, and that there’s even been talk of turning the story into a movie.

“Over the years I’ve had thousands of people who have said, ‘Why has this not been made into a movie?’ ” he said. “It’s just one heck of a story.”

After the game, which the Raptors won, Nurse attended a reunion with Kuemper alumni in the Twin Cities. An alumni bus trip from Carroll was canceled that weekend because of a winter storm.