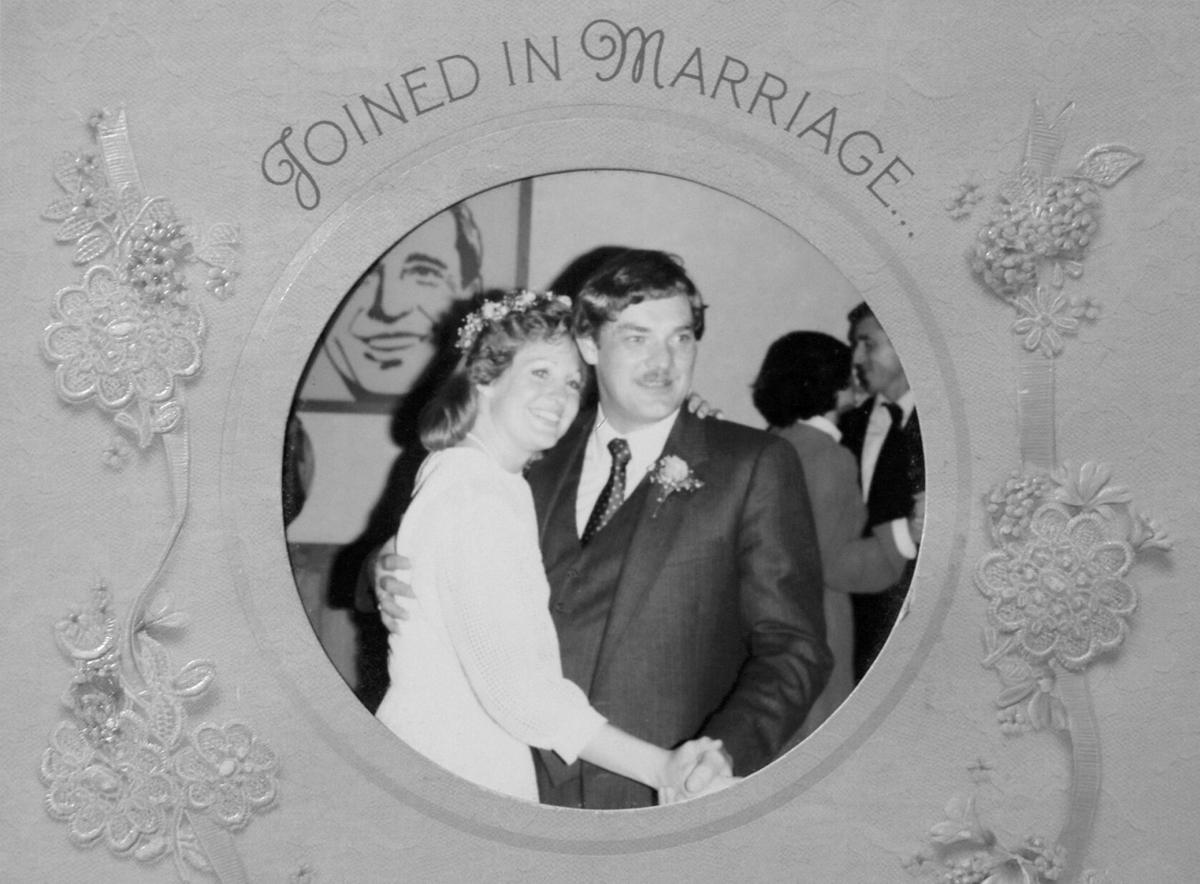 Nina and Keith Rasmussen, when they were married. 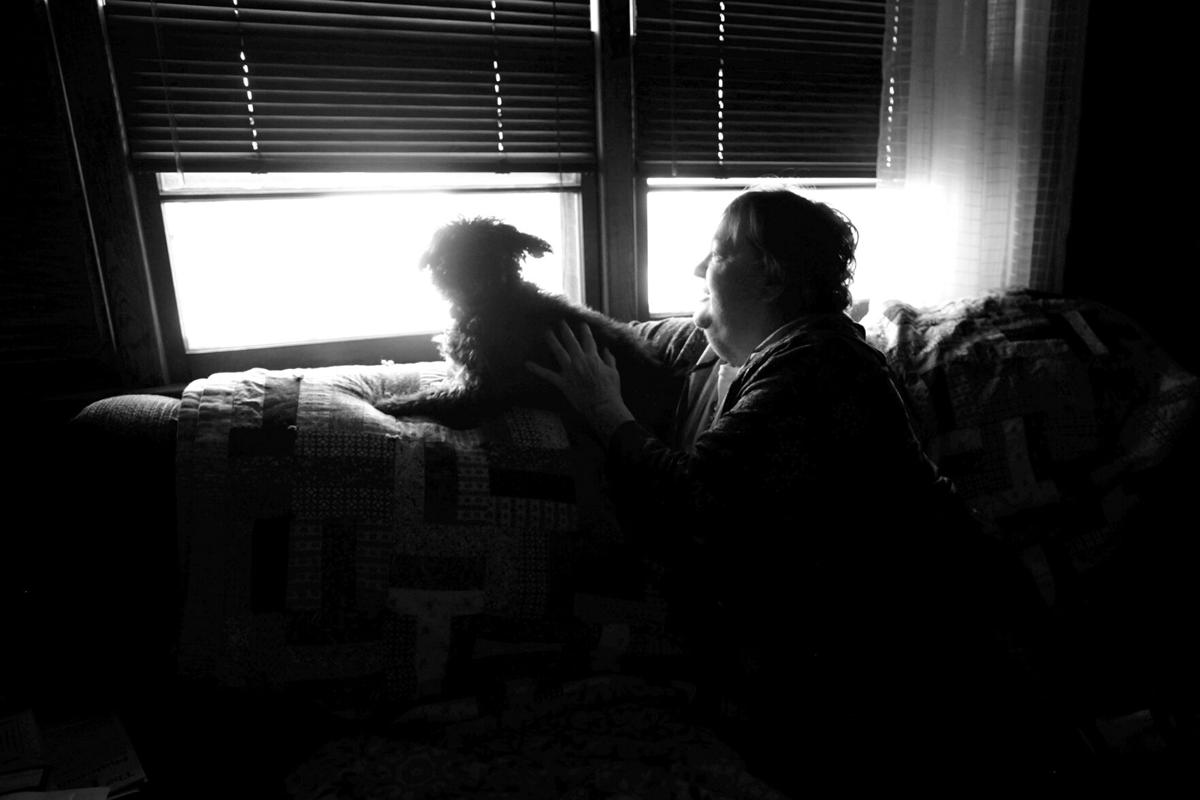 Nina Rasmussen and her dog Pebbles, looking out at the world.

Editor’s note: This is the last story in a three-part series about a group of friends infected by the coronavirus. Part one is here, and part two is here.

MANILLA: It had been nine days since Nina Rasmussen last glimpsed her husband Keith, after he collapsed because of his ailing heart and tested positive for the coronavirus and went into isolation.

Keith lay in his hospital bed with a phone next to his ear. Through it, Nina spoke.

Honey, are you leaving me?

Nina and Keith had talked this way a few times while they both were hospitalized for the virus in September.

He was in Council Bluffs and she was in Denison and the phone speaker was loud so Keith could hear.

For years his hearing was terrible, along with most of the rest of his body from diabetes and cancer. He could barely walk. And now he could barely breathe.

Keith, 71, had signed his name to a piece of paper that said he didn’t want doctors to bring him back to life if he died. He didn’t want a ventilator’s tube down his throat.

That’s what he had said early in their brief hospital calls. It was hard to talk thereafter, so they prayed to God instead.

Aren’t you going to wait for me to go to heaven? Nina nudged in her light-hearted way. I thought we were going to go together?

That would be fine, Nina had decided. As long as they were together.

But then she thought of her brothers and sisters and how terrible their grief would be. And her will. Yes, she had finalized her last will and testament, but no, she hadn’t told her survivors who were supposed to execute it. And why? WHY, when she was so afraid to die was she thinking about the toasted ravioli at that Italian restaurant in St. Louis that she hadn’t tasted for years?

It reminded her of home.

Their last phone call came abruptly and was brief, as if Keith was trying to hold on just long enough because he didn’t want to be alone when it happened.

Nina heard his voice quiver but couldn’t find any of his words.

Honey, are you leaving me?

Nina heard him exhale one more time, and a distant voice on the other end of the phone said his pulse was gone in a matter-of-fact way.

I CAN’T HUG YOU

An overwhelmingly vacant feeling radiated from Nina’s chest. It felt like nothing and everything all at once and she wailed and wailed until a nurse came to see what was wrong.

The nurse said she couldn’t give a hug, sorry, but Nina should call someone.

It couldn’t be Joan, her best friend, because Joan’s condition was ever-worsening in a hospital across the river from Keith, as the same virus tried to take her.

She called Joan’s daughter instead and cried more.

Nina was a bit younger than Keith and had none of his health problems, so she had been offered an experimental treatment that she can’t name with ease.

It causes the coronavirus to make broken copies of itself. Nina vaguely remembers it flowing from a green bag into her arm.

The days dragged after Keith died. Nina was still hazy and occasionally breathed oxygen through a tube, but she was getting better. She lay on her stomach to help her lungs clear.

For three days more she recovered in that hospital room and started planning her husband’s funeral. There wasn’t anything else to do.

Nina struggles to hold back the guilt that everyone says she shouldn’t feel. There’s no way to know for sure that she carried the virus to the friends’ card party that September afternoon, or that she had infected Joan while they ate cherry pie or when she helped Joan with her cards.

The two other friends who were there didn’t get sick as far as they knew, and Joan wasn’t the type to blame.

What Nina does know is that life has changed. She sometimes struggles to get out of bed in the morning, and cooking for just herself is tiring and reminds her of Keith, and how many bananas is she supposed to buy when she goes to the grocery store now? Five or two?

Does she throw away that green bar of Irish Spring soap in the shower because, ugh, it smells like a man but, gosh, it sure smells like Keith?

Nina hopes that as the pandemic continues to rage, other people make different choices about seemingly harmless get-togethers and don’t have to answer the same questions and guilt.

She spends most of her time at home now with her dog Pebbles, a lively little thing with curly black hair and a sloppy wet tongue.

She talks once each week with a group of people who have also felt the pain of death and loss. It’s grief counseling that a local hospital offers online.

It’s been two months since the funerals, and on a recent afternoon Nina finally boiled bones to make broth for beef vegetable soup. It was something she and Keith had done every year since they married. A great big batch with enough to freeze for the entire winter.

She’s somewhat happier now. When she thinks of Joan and Keith it makes her smile.

And on a recent cold day, when a gentle storm passed over and left enough snow to cover the ground and everything was still and quiet and soft when it left, Nina and Pebbles sat on a couch and gazed outside.

Nina paused. She said: “It’s a new snow, a wonderful day, a new beginning, Pebbles. Everything is clean and beautiful.”

A spreading sickness, part I