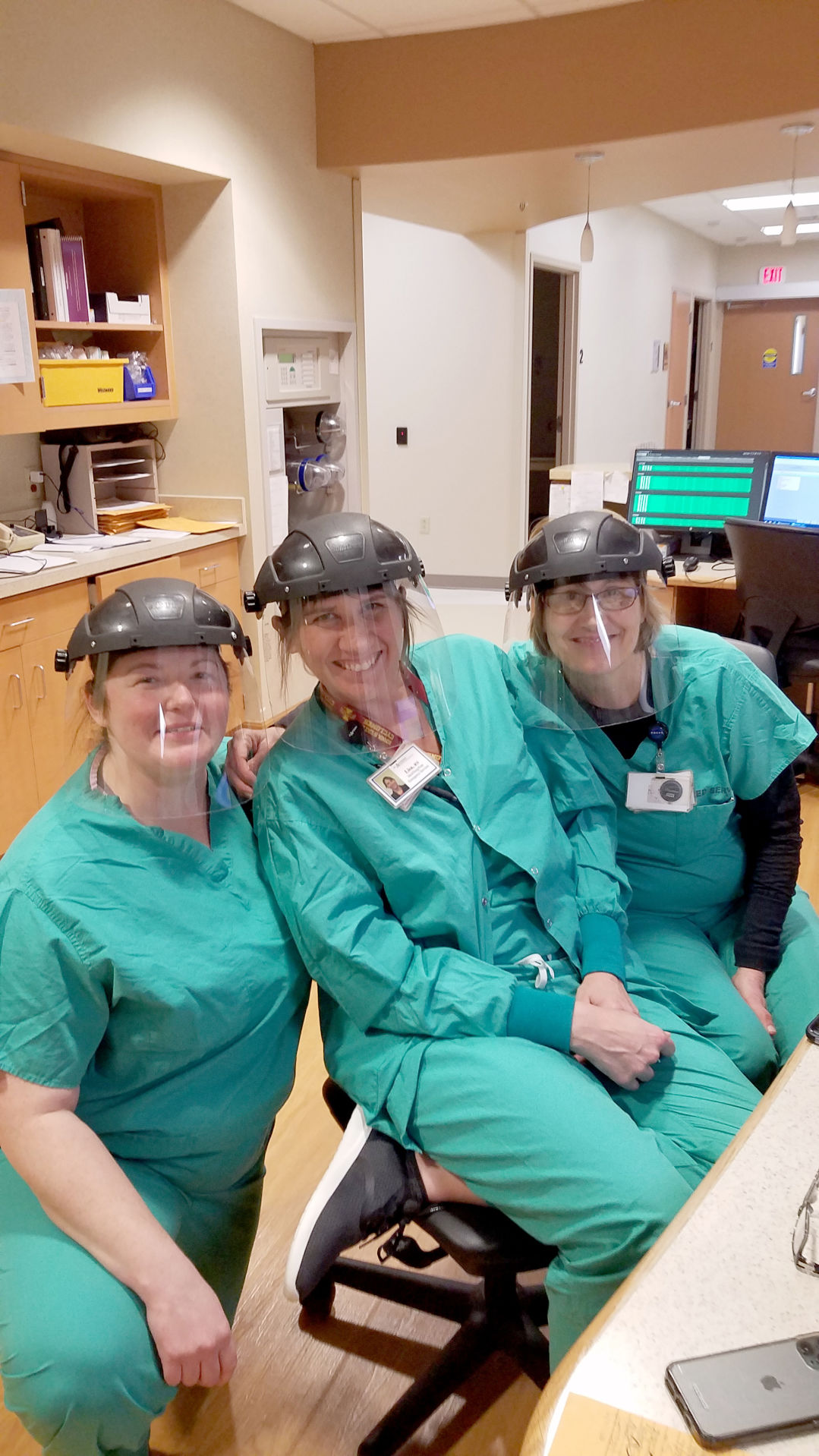 Registered nurses (from left) Susan Kock of Carroll, Lisa Hartwigsen of Glidden and Tammy Roetman of Coon Rapids model face shields normally worn by welders during their shifts in the Emergency Department at St. Anthony Regional Hospital in Carroll. The shields were designed by DMACC Emeritus Professor Jack Thompson. 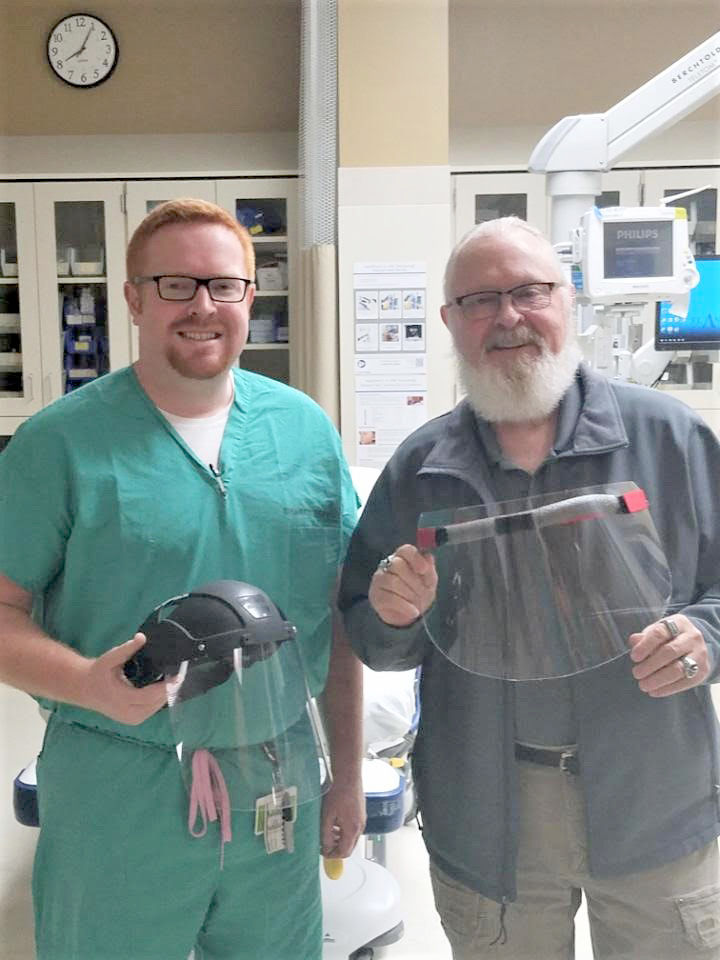 Cory Thompson, an Emergency Room nurse at St. Anthony Regional Hospital in Carroll and a 2013 graduate of the Des Moines Area Community College Carroll Campus nursing program, knew that he and his fellow health care workers were going to need more personal protective equipment (PPE) during the COVID-19 pandemic. And he also knew exactly who to call — his dad.

DMACC Emeritus Industrial-Electro Mechanical Technology Professor Jack Thompson was in the midst of remodeling his Carroll home when his son called.

“I had several dust masks, but no safety glasses,” said Thompson, reflecting on his immediate thoughts. “After some thinking, I asked my son if (the hospital workers) could use a full-face shield, and he said that would be the preferred type of protection.”

The elder Thompson sprang into action, first taking a closer look at his DMACC welding gear. He noticed that the headgear was in good shape but the plastic lenses weren’t looking so good.

Matheson didn’t have any replacement lenses for the type of headgear Thompson was calling about, but it did have an older version of the lenses on hand. Thompson set up an appointment to look at the lenses and was excited when he determined he could cut them to fit.

Thompson then called DMACC Carroll Campus Provost Dr. Joel Lundstrom to ask if he could use the DMACC headgear, explaining how it would be used at the hospital.

“I immediately thought it was a good cause and was needed for the safety of the medical community in Carroll,” Lundstrom said.

Thompson returned to the supplier and purchased enough of the older-version lenses to begin his new project — which included carefully modifying the older lenses to fit the new headgear. This meant cutting the lenses from a twist-lock fit to instead fit a snap-in fit with two small bolts to hold the lenses in place.

“Before I could put the lenses into the headgear, I had to disassemble the headgear and clean them, so I ran them through three cycles in my dishwasher,” Thompson said. “I then used a green pad to make sure all of the surfaces were clean of any metal that may have been imbedded in the plastic. It also took about an hour of scrubbing to clean my dishwasher after I was done.”

After reassembling the face shields, he then called his son, who picked them up and took them to St. Anthony. It proved to be a popular delivery.

“By providing us with face shields, you are not only protecting our staff, you are protecting the patients and community we’re privileged to serve,” said Bailee Schleisman, RN, who works as an infection preventionist at St. Anthony.

Trish Roberts, director of the St. Anthony Regional Hospital Foundation, said many health care providers have had a difficult time getting personal protective equipment from traditional suppliers. She said the state and federal government have limited supplies, and most of those limited supplies are going to COVID-19 hot spots.

“During this challenging time when PPE is in short supply, we sincerely appreciate the outpouring of support from our community,” Roberts said. “People are providing protective equipment and supplies that typically are used in different settings. These items are now being used effectively by our frontline health care staff.”

Thompson, meanwhile, was just getting started.

“The next day while watching a video on YouTube, I noticed a simpler version of the (face shields) that I had just rebuilt,” Thompson said. “I asked my son if the hospital could use more shields, and his response was ‘most definitely, yes.’”

Thompson went back to Matheson to see if he could purchase its remaining lenses, but unfortunately, that was not an option due to a freeze on sales of safety equipment due to priority needs elsewhere.

After returning home, Thompson was sitting in his living room and considering alternative options when he noticed a poster he had framed. He started thinking the plastic might be flexible enough to wrap around his head — and so the deconstruction began. He knew he needed some padding for the forehead, so he looked to Velcro. He also realized the items needed to be sanitized, so the ability to disassemble it for cleaning was very important. The next step was figuring out how to cut the plastic.

“I tried a scissors first, but the plastic was too brittle, so I turned to a Dremel tool with a cutting wheel,” Thompson said. “It worked, but I figured out later that an oscillating saw works even better.”

Thompson said it takes him about an hour to make each face shield, and he has made 26 to date, including the initial batch of six that went to the hospital. He said he has about $300 invested so far.

“As far as making more, materials are getting hard to find, but I will keep changing and making them,” Thompson said.

“This is part of a larger DMACC effort to support the communities that we serve,” said Provost Lundstrom.