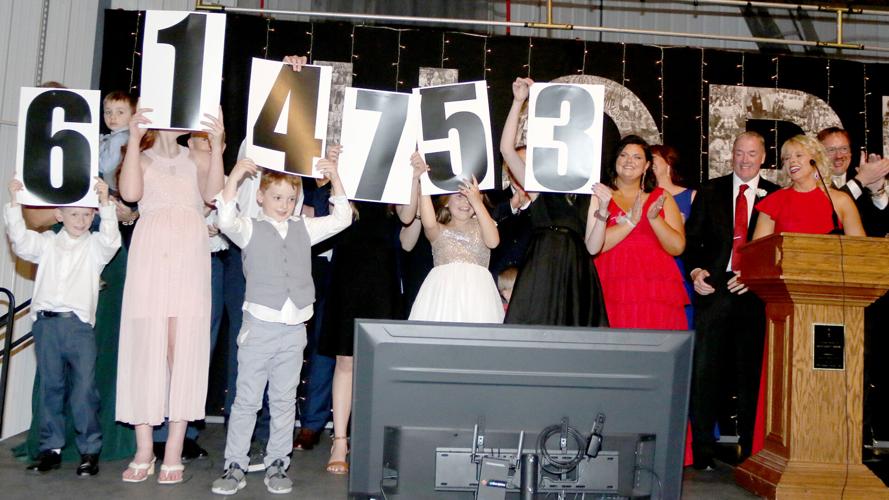 Children of the chaircouples for the 38th annual Friends of Kuemper Ball reveal preliminary fundraising of $614,753; however, the Ball blitz and the live auction lifted that total to a record of more than $705,000. 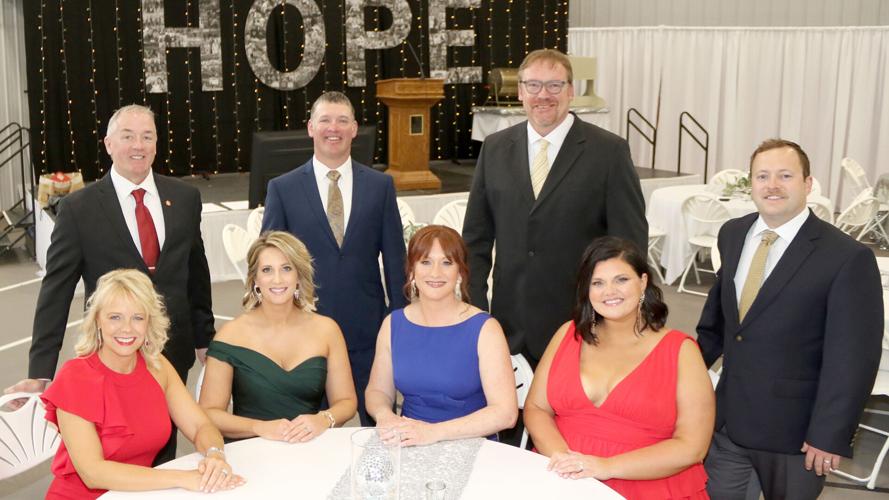 The 38th Friends of Kuemper Ball campaign featured the theme "A Knight of Hope." Chaircouples pictured at the Kuemper Field House before the Ball on Saturday, April 30, are (from left) Jennifer Handlos and Curt Snyder, Kellie and Brian Brenny, Shelley and Jesse Diehl, and Abby and Nick Schultes.

Children of the chaircouples for the 38th annual Friends of Kuemper Ball reveal preliminary fundraising of $614,753; however, the Ball blitz and the live auction lifted that total to a record of more than $705,000.

The 38th Friends of Kuemper Ball campaign featured the theme "A Knight of Hope." Chaircouples pictured at the Kuemper Field House before the Ball on Saturday, April 30, are (from left) Jennifer Handlos and Curt Snyder, Kellie and Brian Brenny, Shelley and Jesse Diehl, and Abby and Nick Schultes.

Built on the theme of “A Knight of Hope,” the 38th annual Friends of Kuemper Ball fundraising campaign for Kuemper Catholic School System soared to record success.

Preliminary numbers revealed in the program Saturday night before a packed crowd in the Kuemper Field House showed fundraising stood at $614,753. But then a final fundraising blitz brought in more than $10,000, and the live auction generated more than $45,000.

Those funds were key, because the Heider Family Foundation, as in previous years, pledged to match up to $10,000 raised by the blitz.

And a new match offer this year really boosted the total.

Brian and Patty (Huegerich) Hannasch, both 1985 Kuemper graduates, now living at Columbus, Indiana, this year introduced a “Thanks, Mom and Dad, Match Challenge.” The Hannasches pledged to match up to $250,000 for every dollar the campaign raised over $600,000.

Brian is a son of Dale and Joan Hannasch. His dad, who passed away in 2000, owned Hannasch Construction, and his mom was a teller at Commercial Savings Bank. Patty is a daughter of Marvin and Betty Huegerich. Her dad farmed north of Carroll, where the couple still live, and Betty retired from UTC Manufacturing.

Brian told the Times Herald, “Our parents believed that you got more than just an excellent academic education from Catholic schools. We would learn that service to others is a basic tenet of the Catholic faith. Spirituality was a part of every aspect of the curriculum and we would be a part of a Catholic community.”

He said of the challenge, “We wanted to inspire others to donate more and Kuemper to benefit. It’s such a great asset for the community.”

Brian graduated from Iowa State University Business School in 1989 and received his MBA from the University of Chicago in 1994. Brian previously worked for BP and in 2000 joined Couche-Tard (aka Circle K), the second largest convenience chain in the world, where he’s now president and CEO. Patty received a bachelor of science degree from Iowa State University in 1989 and from 1989 to 2007 worked in sales and sales management for Pfizer. She’s now retired and volunteers in the Columbus community.

Over 38 years, the Kuemper Ball campaigns have now totaled more then $12.7 million. Funds have been used for teacher pay, student tuition assistance, technology and office equipment, capital major needs, and much more.

This year’s campaign chairouples were Brian and Kellie Brenny, Jesse and Shelley Diehl, Nick and Abby Schultes, and Curt Snyder and Jennifer Handlos. Heather Pietig, alumni and annual giving director, was the Ball coordinator. A large team of volunteers makes fundraising contacts and handles a variety of other responsibilities.

Snyder said of the record success, “It was a complete team effort. We reached out to a lot of people. There was a lot of excitement, and then the Hannasch match really spurred it more. You knew if you made a donation of $500, it was going to turn into $1,000. It made people give a little more than they would have before. They liked the idea of it getting matched. That element that the Hannasch donation brought to the Ball is immeasurable.”

He continued, “Every Ball takes a full team, all the supporters. We had a full house last night. There was just great energy. People are excied about Kuemper and knew with their support it will continue to stay strong into the future. I think it shows we have a great foundation and that we’re going to continue to grow. This helps teachers. It helps draw students because we’re able to help them with tuition assistance. It’s great for the school and great for the community.”

The auction, led by Kevin Liechti, assisted by Brian Brenny, produced entertaining, lively bidding, with the highest price — $7,900 — going for two concert and meet-and-greet tickets for a show by country music sensation Lady A. Included was a Visa gift card for souvenrs or dinner. Some of the other auction items were a Hy-Vee party package, tickets to Iowa and Iowa State football games, a quarter of beef from White Gate Cattle and a pork package (whole hog) from Tiefenthaler Farms.

Snyder said, “We had a lot of pressure on us to make that match count the best we could. All you can do is work hard at it and hope you find the support, and I think we saw that last night in the auction, because going into it we were just at that $600,000 and we hadn’t capitalized much on what the Hannasch family was going to do until it got to that auction, and then it just blew up. It was incredible. The energy was so much fun.”

More coverage of the Ball will be in a future Times Herald edition.