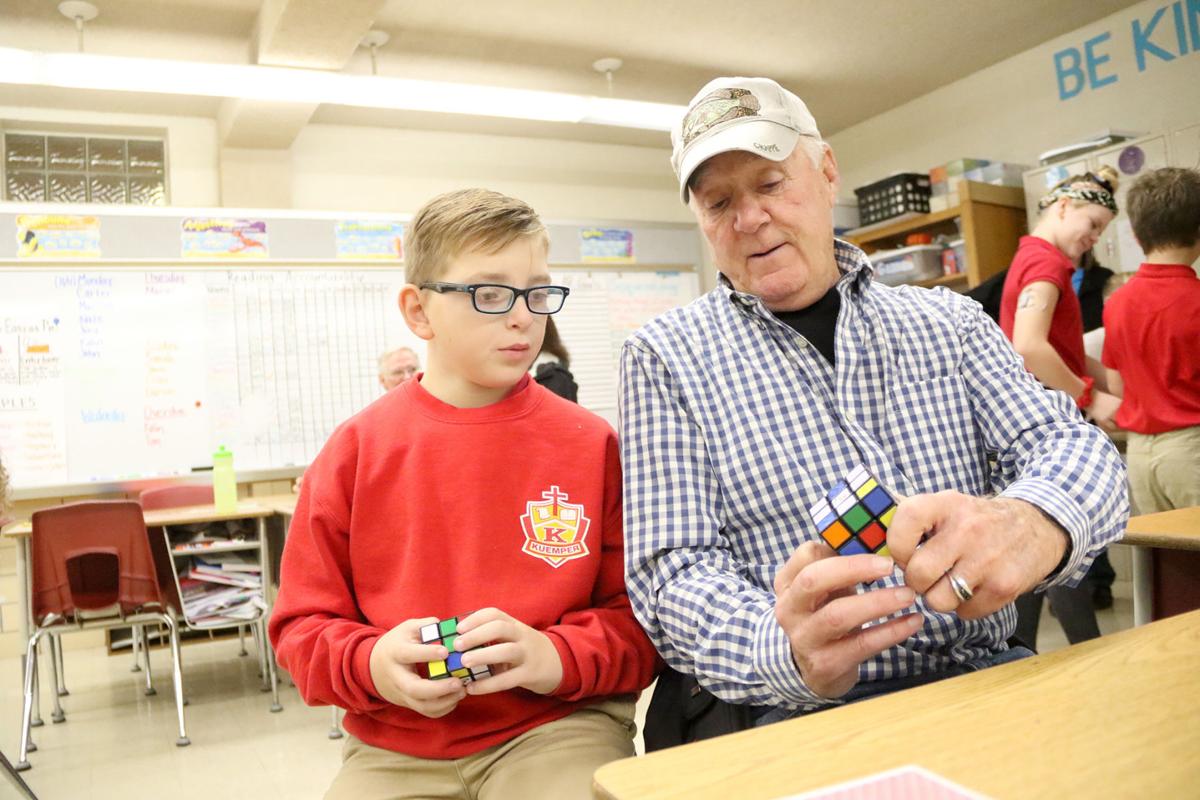 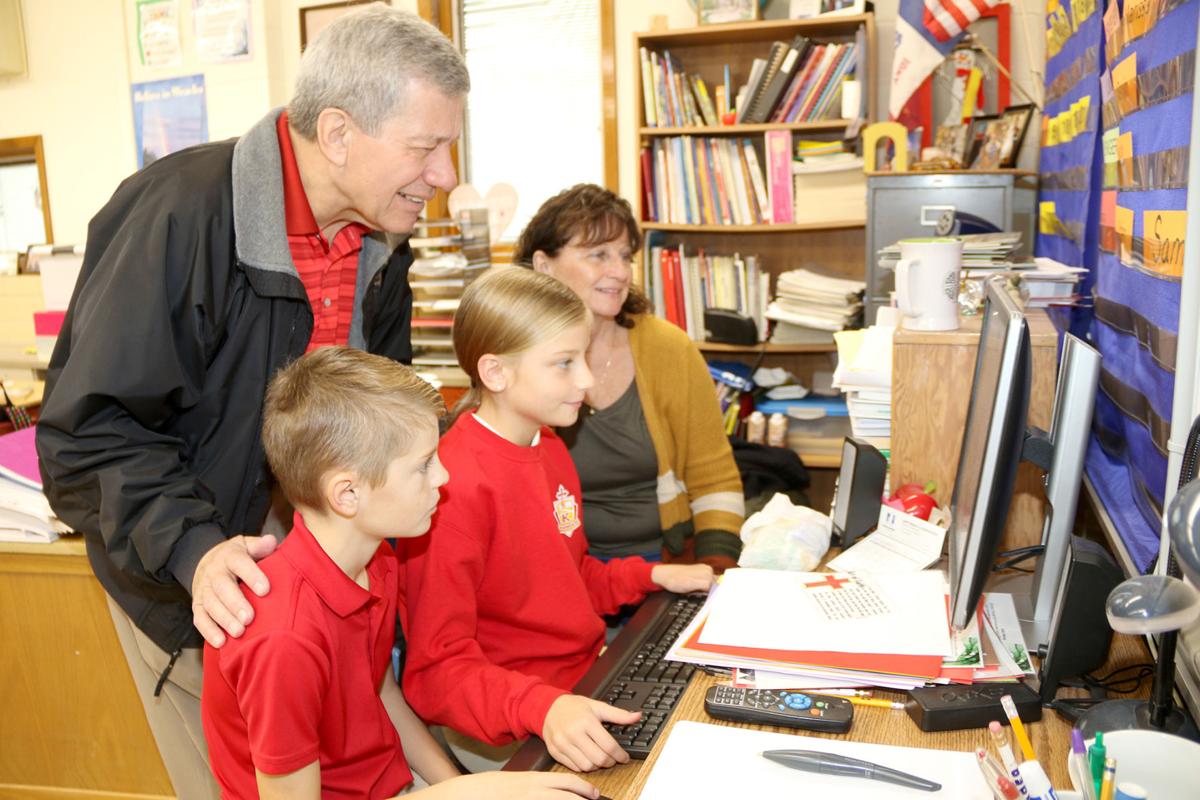 Richard and Jeannine Muhlbauer visit their grandchildren Charlie Schreck, fourth-grader, and Marisa Muhlbauer, fifth-grader, during Grandparents Day at Kuemper Catholic School's St. Lawrence Center. They’re reading a poem titled “Grandparents” that Charlie created. He concluded the poem, “Last of all, best of all, I like my Grandparents.” 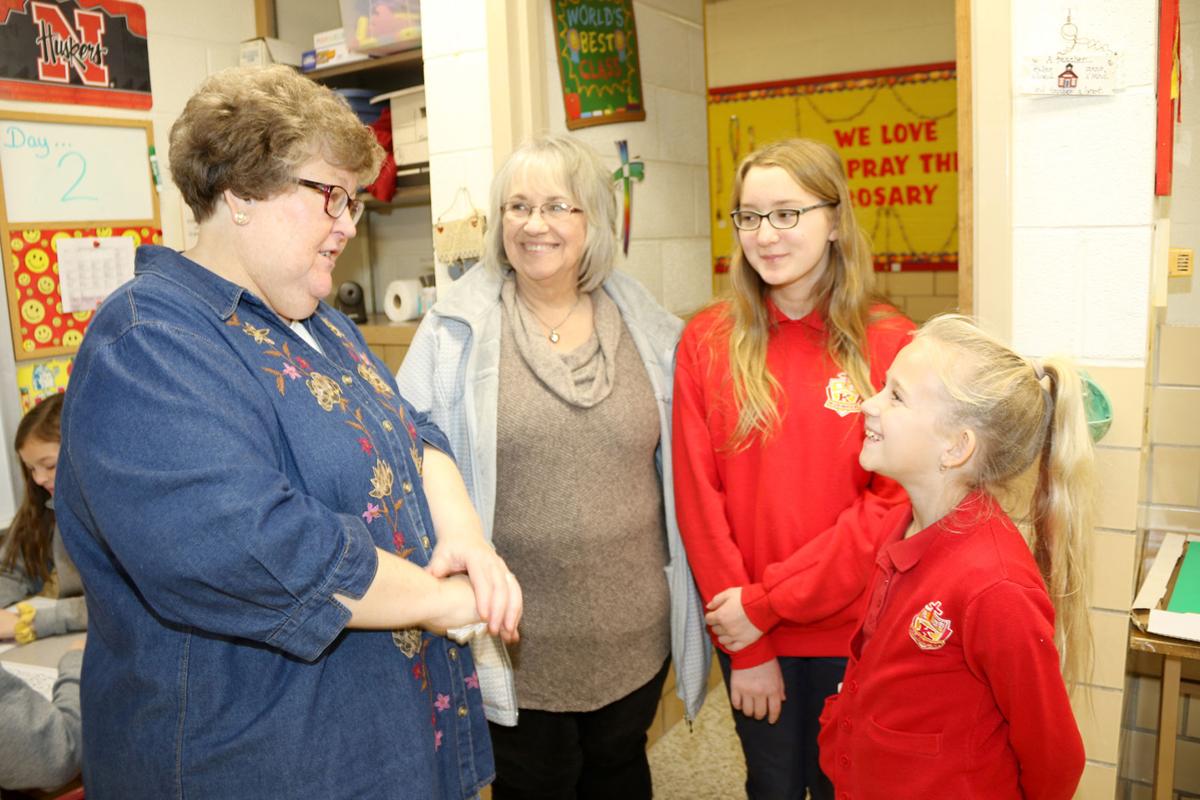 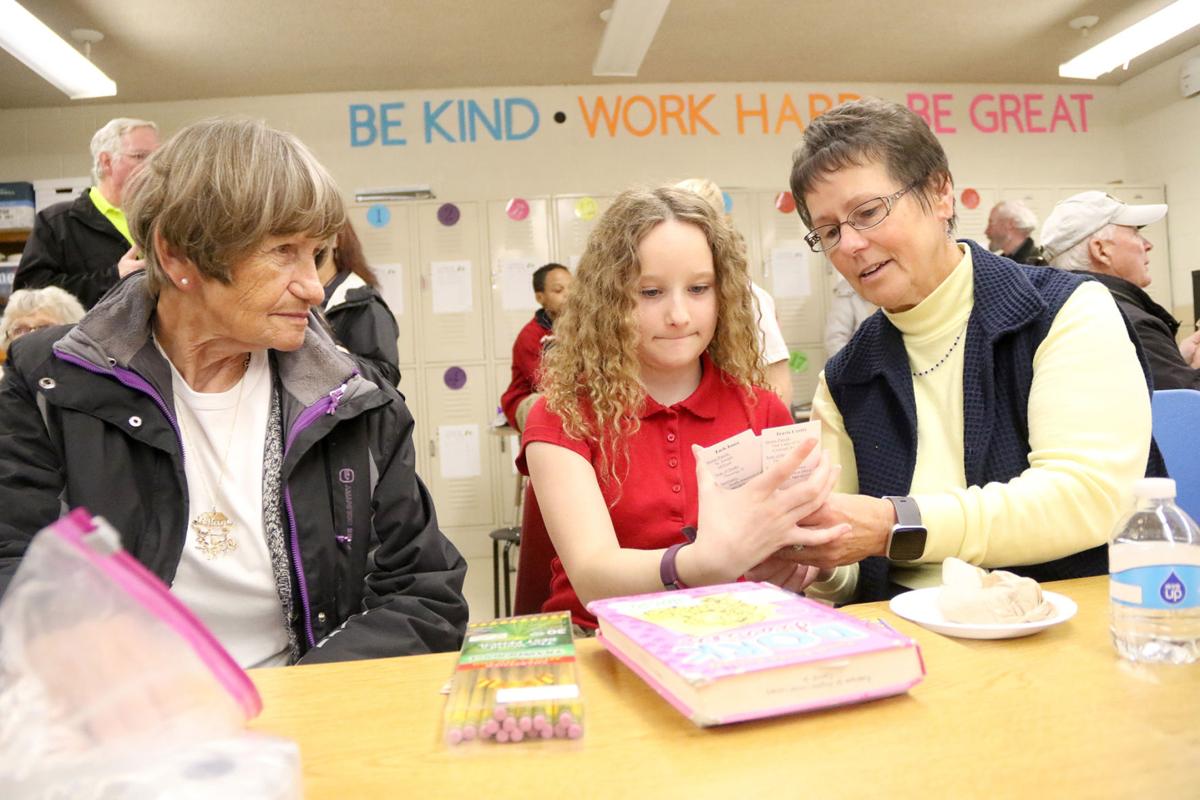 Richard and Jeannine Muhlbauer visit their grandchildren Charlie Schreck, fourth-grader, and Marisa Muhlbauer, fifth-grader, during Grandparents Day at Kuemper Catholic School's St. Lawrence Center. They’re reading a poem titled “Grandparents” that Charlie created. He concluded the poem, “Last of all, best of all, I like my Grandparents.”

Rich and Jeannine Muhlbauer and Jerry and Maureen Rupiper have been guests at many Grandparents Days in Kuemper Catholic School attendance centers over the years; nevertheless, they’re special events every time.

“By attending Grandparents Day, we see the tradition carried on and feel strongly that our grandchildren are experiencing the Catholic education that we and our children have had,” Jeannine Muhlbauer said.

“It’s unbelievable the number of people they draw to come to (Grandparents Day). The kids enjoy it so much,” Maureen Rupiper said. “They look forward to it, showing us around the classrooms. It’s just a very nice program.”

“It’s a family affair,” Jerry Rupiper said, welcoming the opportunity to celebrate the value and long history of Catholic education in the Carroll area.

He added, “Grandparents, being leaders, show them we support them (the students),” Jerry Rupiper said. “We’re proud Kuemper is able to continue to offer Catholic education.”

The Muhlbauers and Rupipers were among the more than 700 grandparents and students who participated in the recent Grandparents Day at the St. Lawrence Center, which houses fourth and fifth grades.

Jeannine and Jerry Rupiper are cousins.

Jerry Rupiper graduated from Kuemper in 1962, and Maureen (Murphy) in 1964. Their four children also all graduated from Kuemper — Jen in 1987, Kim in 1993, Amy in 1995 and Kelly in 1998. On Grandparents Day, the Rupipers were visiting Piper Klein, fifth grade, and Carter Boell, fourth grade. Six other grandchildren in Kuemper are seniors Logan Klein and twins Paige and Peyton Higby, sophomore Tanner Higby, freshman Easton Klein and eighth-grader Lauren Boell. Granddaughter Olivia Klein graduated this spring and is now attending Simpson College in Indianola.

On Grandparents Day, grandparents and students attended Mass together at St. Lawrence Church. They then had a fellowship social in the school gym before students took their grandparents on a tour of the school and visit to their classrooms.

Fourth-grade teacher Halie Darrow said, “I saw students bringing their grandparents into the room and slowly walking them around to describe every little thing they could, as well as playing games together and bonding. It was great to see different families interact and connect.”

What makes Patrick Mahomes so good?

“I enjoyed seeing their classrooms and meeting their teachers,” Maureen Rupiper said.

She added, “I think it’s nice Kuemper offers that — grandparents and grandchildren, everybody enjoys it. … I just think (the students) enjoy showing off their rooms and some of the things they’ve made. It makes them feel important they get to do that.”

She said of the anticipation for the day, “Students were very excited to be able to host their grandparents. Students spend five days out of the week here at school, so they were excited to get to show their grandparents where they spend a lot of their time. The morning before, students couldn’t stop talking about all the things in the classroom and their displayed work they wanted to show Grandma and Grandpa.”

“Grandparents have such a special relationship with their grandkids, so we just want to make a special morning for both the kids and the grandparents,” said Ted Garringer, Kuemper prekindergarten-through-eighth-grade principal.

Kuemper’s Holy Spirit and St. Angela centers each will host a Grandparents Day next spring.