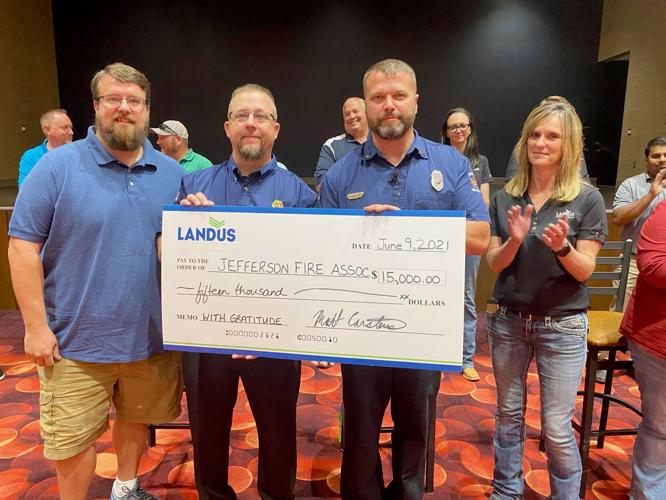 Landus donated $15,000 to the Jefferson Fire Department and $1,000 each to the Carroll, Scranton and Grand Junction fire departments for their roles in responding to the May 14 explosion at the Jefferson Landus facility. 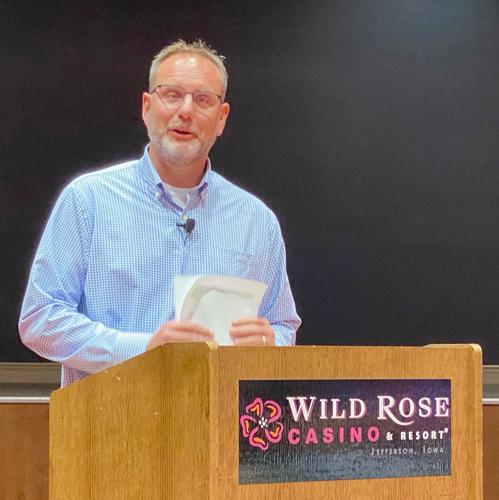 Landus President and CEO Matt Carstens spoke and fielded questions for more than an hour Wednesday in the wake of a May explosion at the cooperative’s Jefferson location.

JEFFERSON: Landus will be prepared to accept grain from area farmers and will boost safety measures in the wake of a May explosion and ongoing small, but contained, fires at its Jefferson operation, the cooperative’s president and CEO Matt Carstens said in an open community forum last week.

“I understand, my team understands, the pain that this has caused this community,” said Carstens, a native of Bagley who lives in Guthrie County. “You should expect better, and we will give you better.”

In a detailed presentation to dozens of people at Wild Rose Casino & Resort Wednesday on the May 14 explosion (in which no one was injured or killed), cooperative leaders, an explosions expert and local officials also reported that the cause of the incident remains under investigation.

“As far as a root cause, we’re just not sure yet,” said Peter Dahl, a fire-and-explosion investigator with Webster, Minnesota-based Dahl & Associates, Inc.

Dahl said the strategy now is to lower grain and remove it from storage so firefighters can extinguish some small blazes. He described the effort as a marathon.

In words of assurance to farmer-members, Carstens said insurance will cover property damages — which run into the millions of dollars — and certain business losses, a key announcement as many farmers not only use Landus for grain transport and marketing but also own equity in what is the state’s largest agricultural cooperative.

In fact, he said the Jefferson location wants to be moving grain by July 1.

If producers normally take grain to Landus in Jefferson, then keep doing so, Carstens said. Landus has locations in 60 communities, including nearby Boone.

The last several weeks have been challenging for Landus as well as the Jefferson Fire Department as the recovery from the blast continues.

At about 8 a.m. Friday, May 14, Landus confirmed a dust explosion in Jefferson. The cooperative quickly told the media the episode resulted in a still-developing amount of business damage, but no loss of life or injury.

“Those employees did their jobs,” Carstens said. “This is absolutely one of our best-performing facilities.”

Dahl, the outside investigator, said the personnel running Landus Jefferson are competent.

“This facility was extremely clean,” he said.

Landus donated $15,000 to the Jefferson Fire Department, and $1,000 each to the Carroll, Scranton and Grand Junction fire departments for assisting.