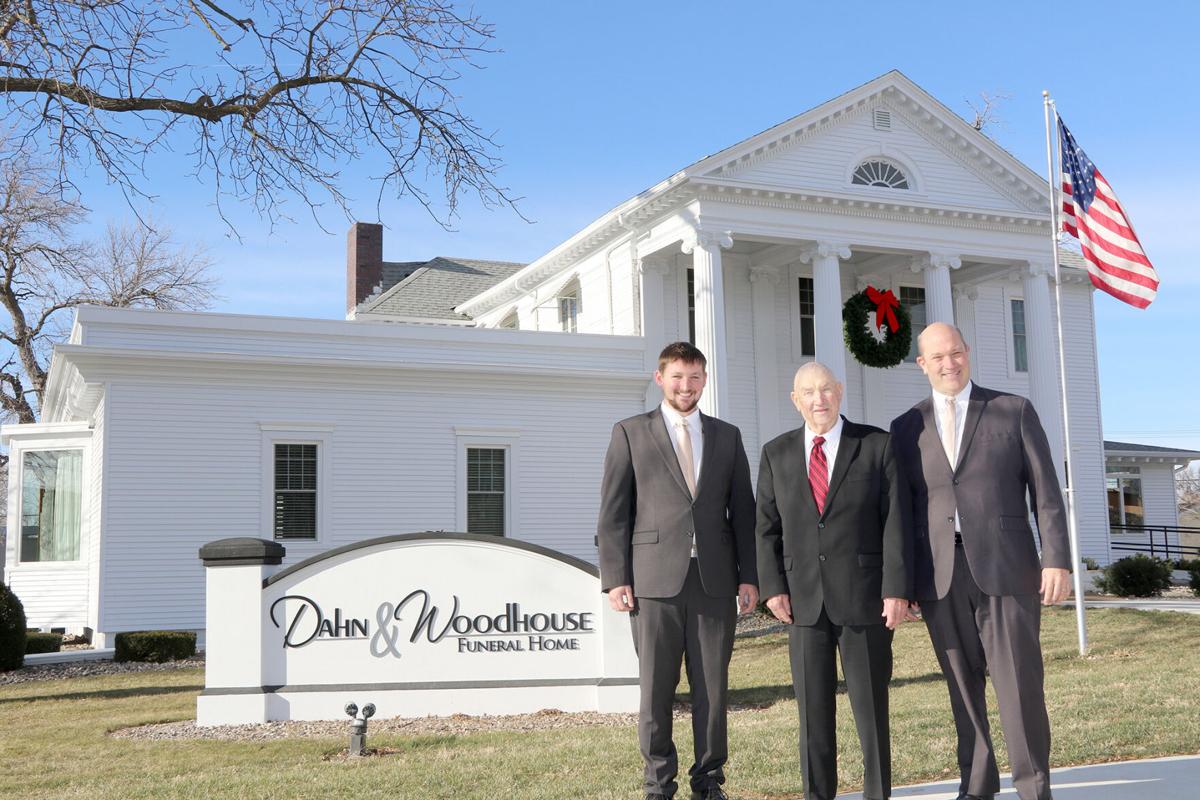 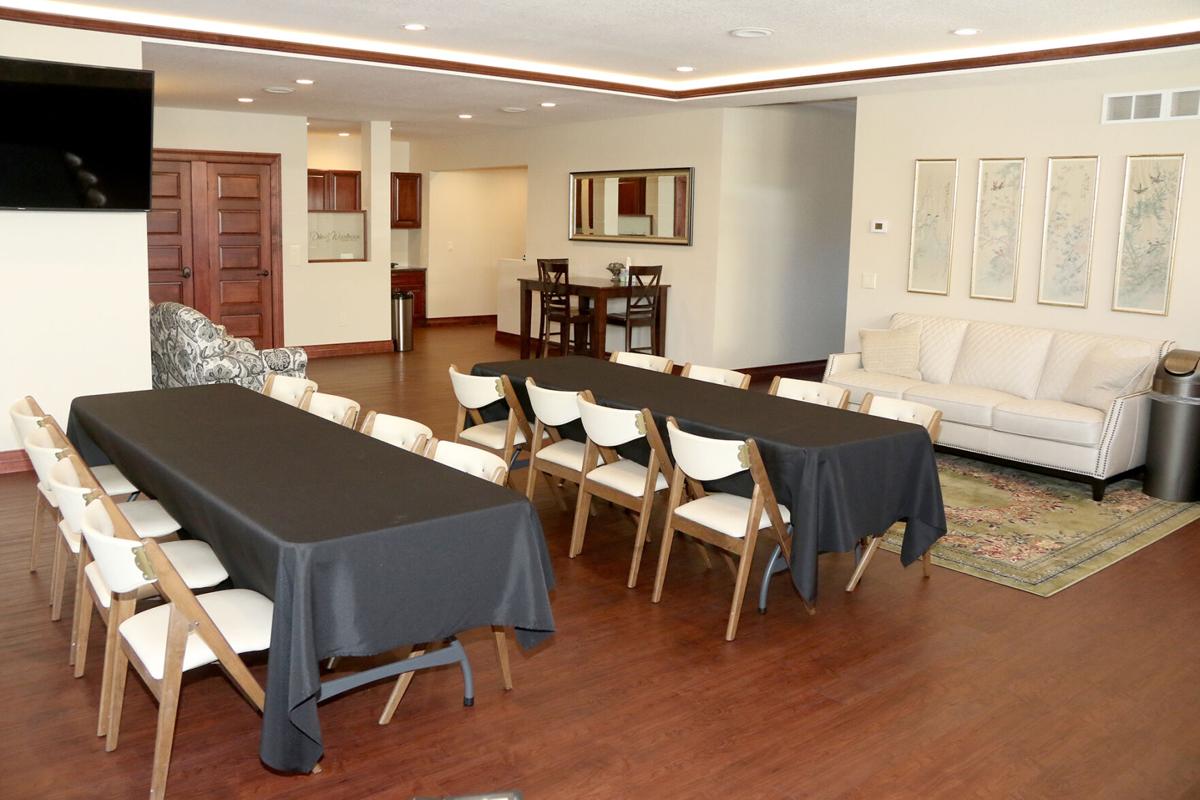 Dahn & Woodhouse Funeral Home recently added on a 15,00-square-foot addition to house a reception room that will hold 75 people. 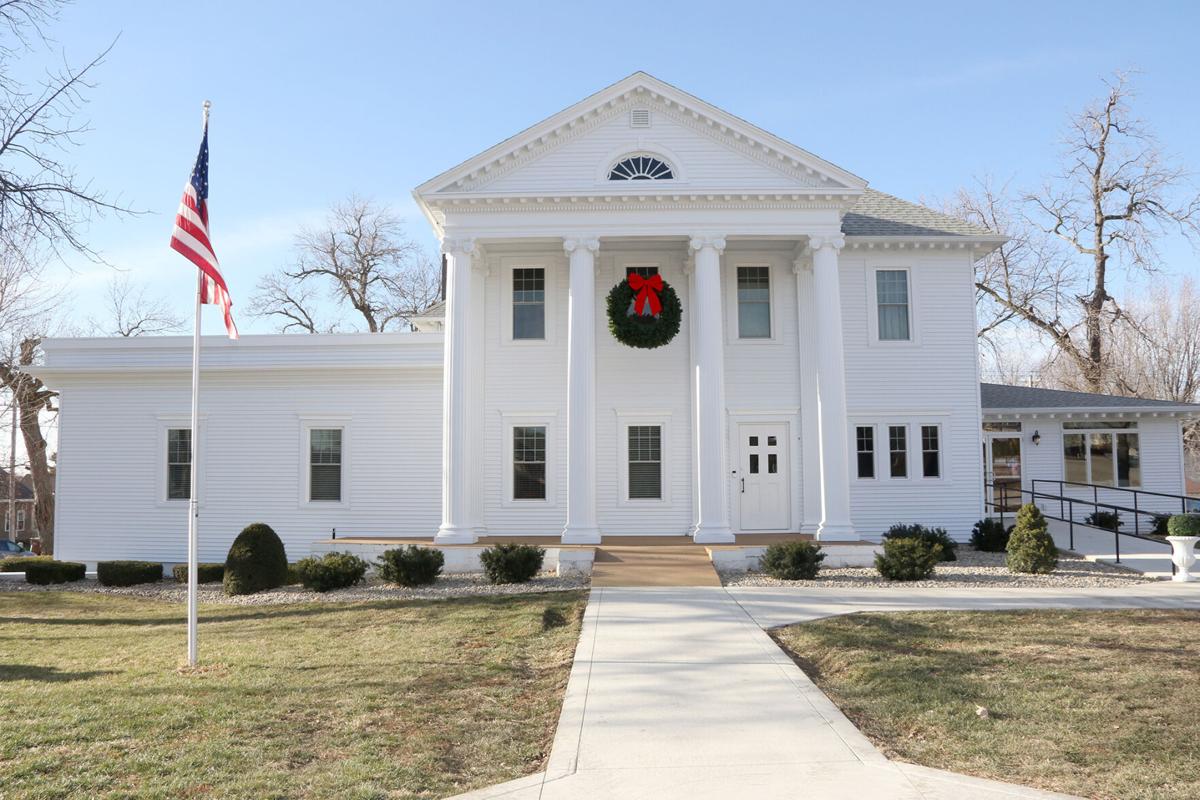 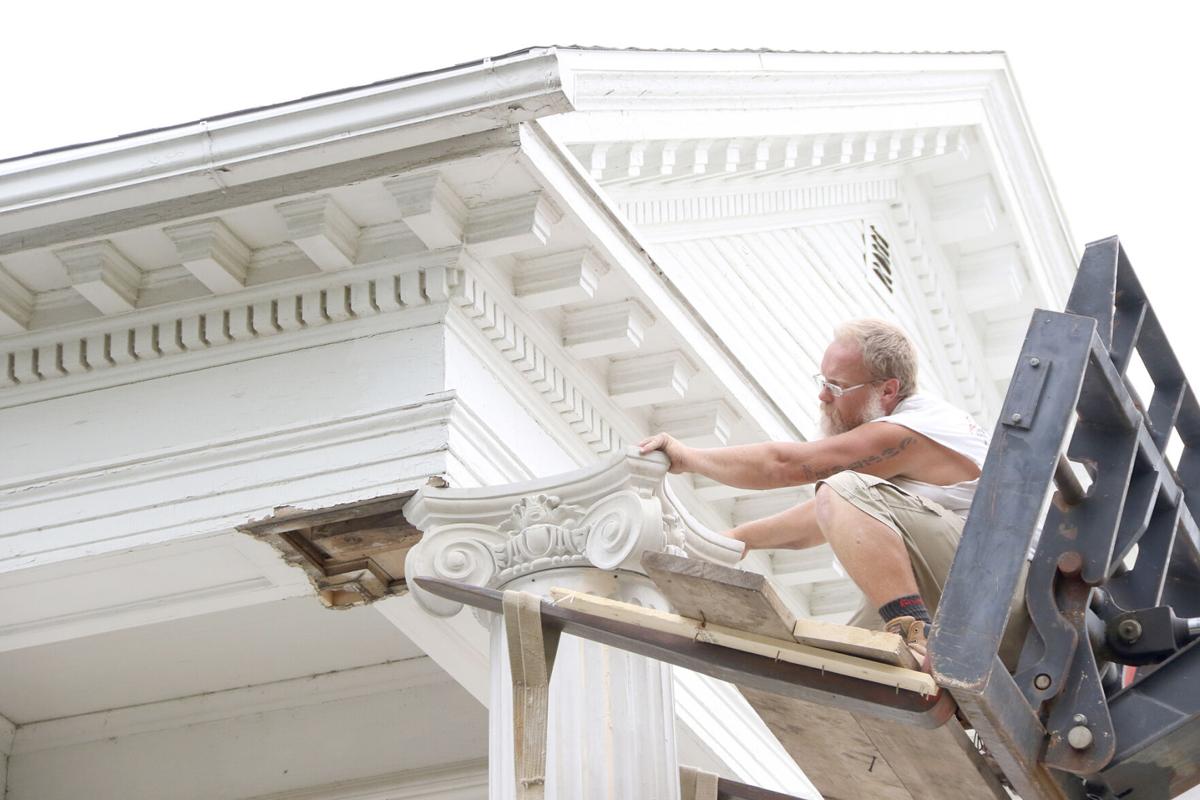 Wittrock Construction removed the more-than-100-year-old wood columns on the front of Dahn & Woodhouse Funeral Home and replaced them with Endura-Stone columns, which almost exactly matched the originals. 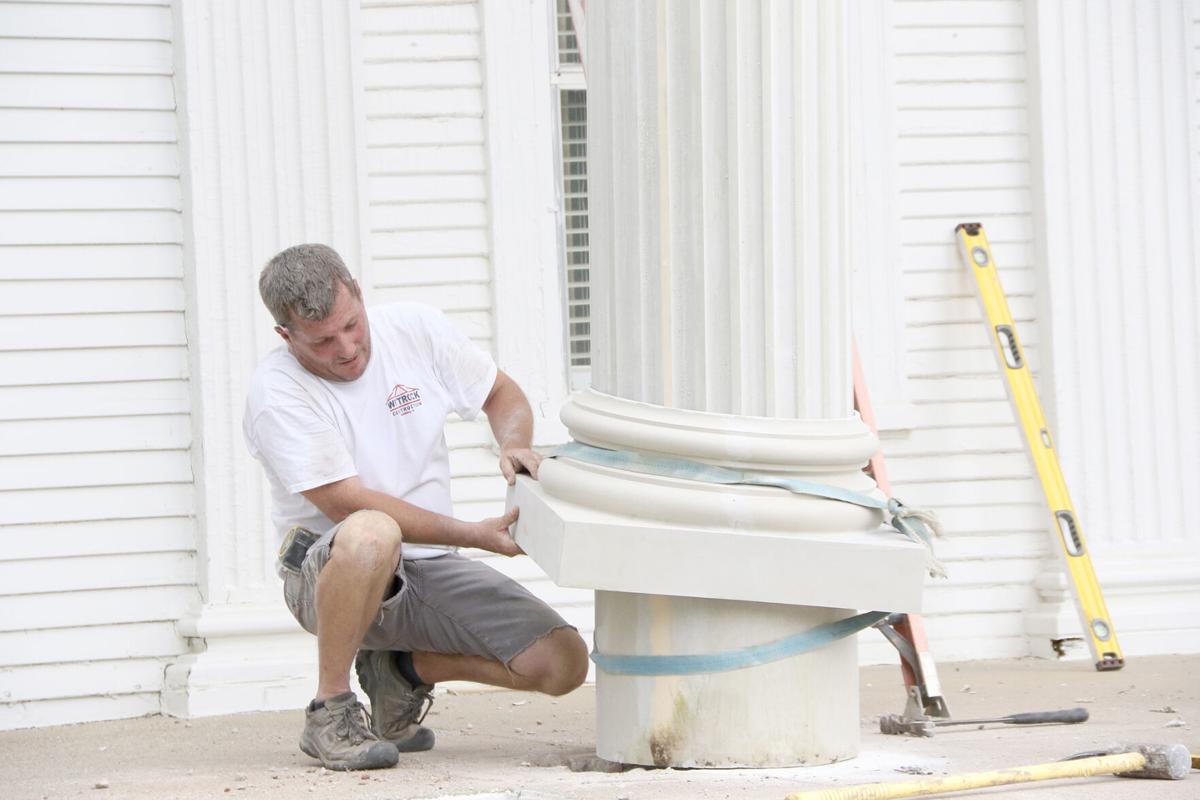 Wittrock Construction removed and replaced one column a day on the front of Dahn & Woodhouse Funeral Home. 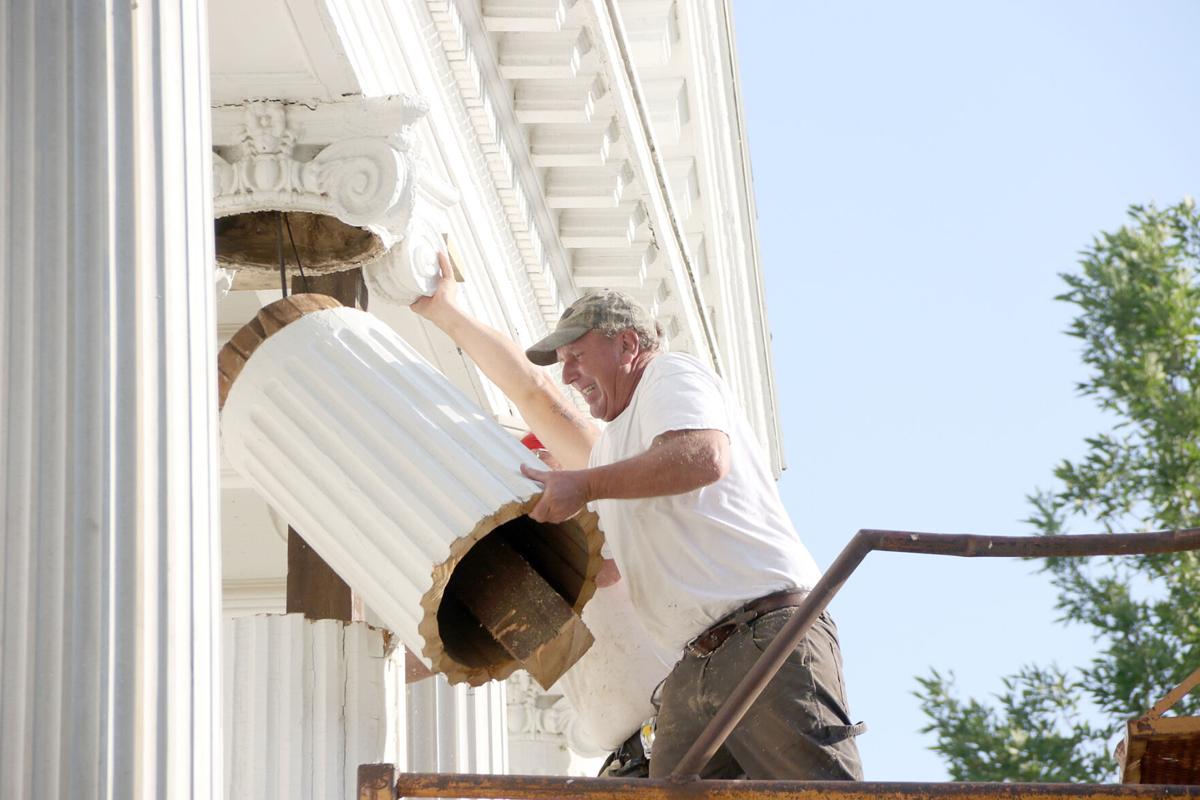 Removing the original wood columns on the front of Dahn & Woodhouse Funeral Home proved to be a heavy lift. 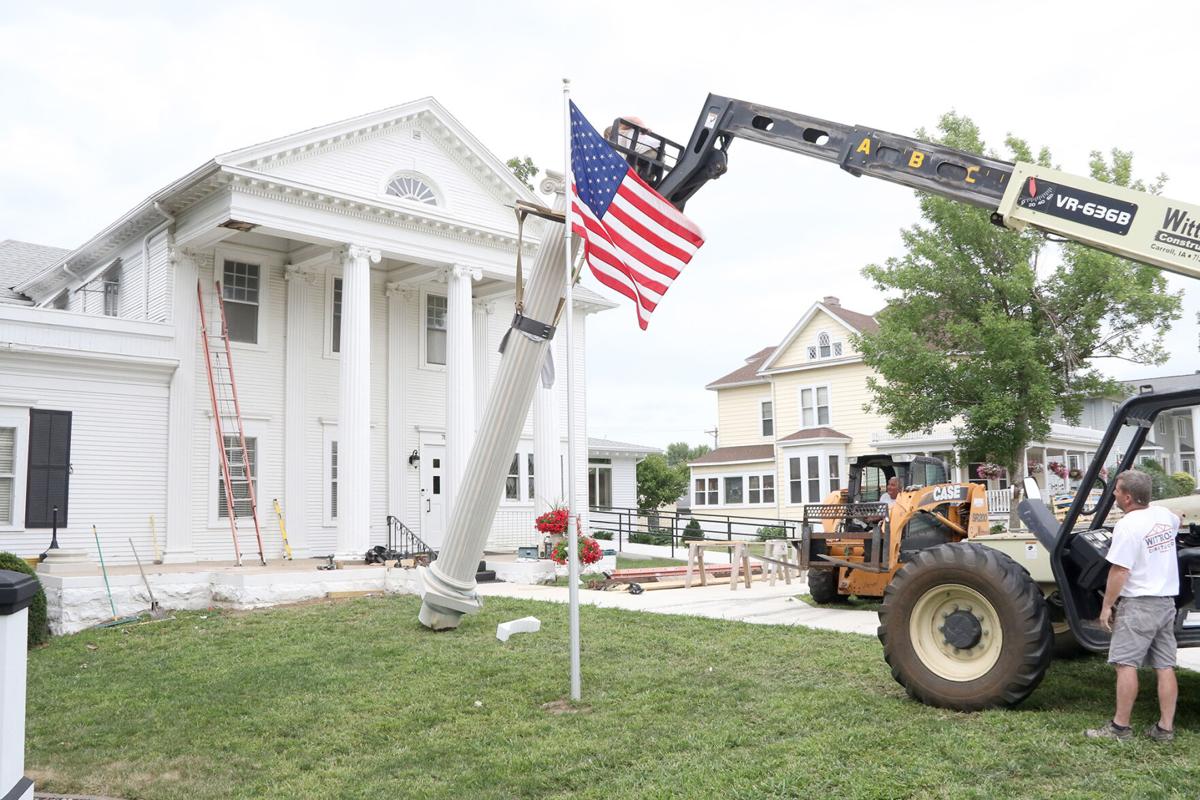 Wittrock Construction replaced the columns that date from construction in 1892 with new Endura-Stone columns, manufactured from rotocast, fiberglass-reinforced polymer. 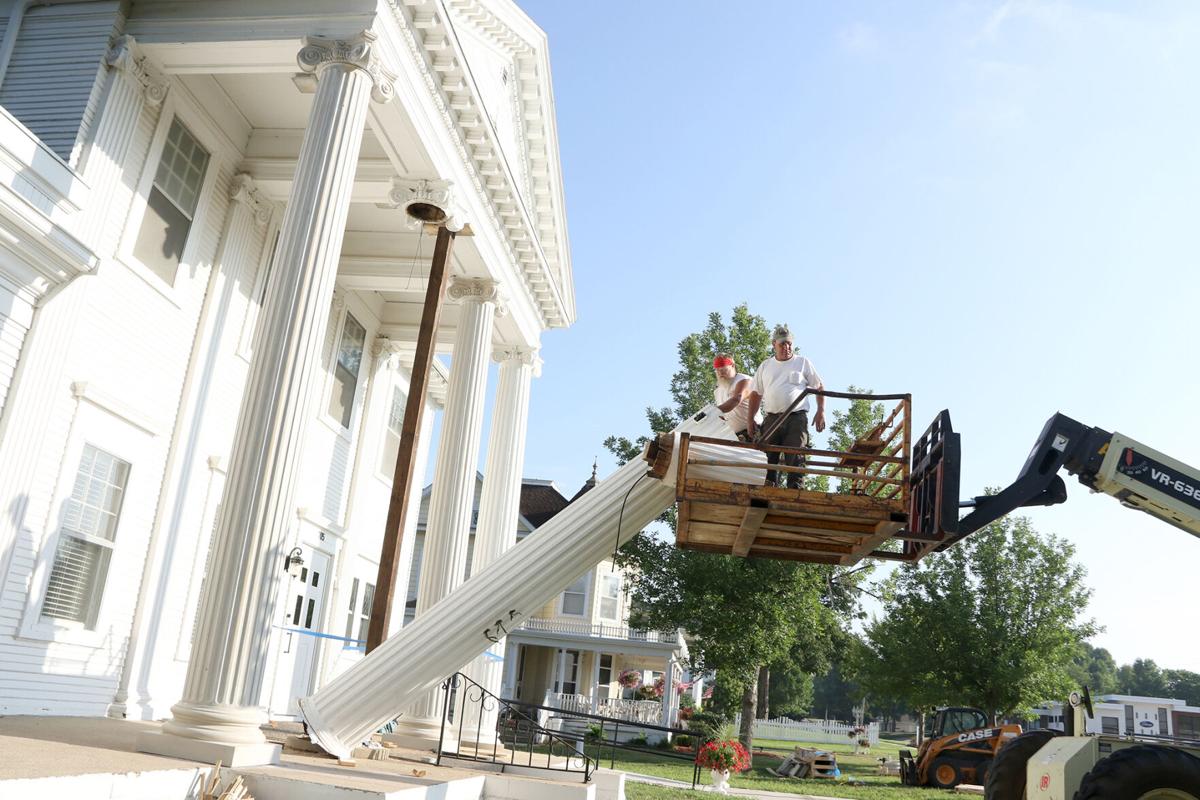 Even after more than 100 years, the main portion of the wood columns on the front of Dahn & Woodhouse Funeral Home were still in good shape, although the bases were deteriorating.

Dahn & Woodhouse Funeral Home recently added on a 15,00-square-foot addition to house a reception room that will hold 75 people.

Wittrock Construction removed the more-than-100-year-old wood columns on the front of Dahn & Woodhouse Funeral Home and replaced them with Endura-Stone columns, which almost exactly matched the originals.

Wittrock Construction removed and replaced one column a day on the front of Dahn & Woodhouse Funeral Home.

Removing the original wood columns on the front of Dahn & Woodhouse Funeral Home proved to be a heavy lift.

Wittrock Construction replaced the columns that date from construction in 1892 with new Endura-Stone columns, manufactured from rotocast, fiberglass-reinforced polymer.

Even after more than 100 years, the main portion of the wood columns on the front of Dahn & Woodhouse Funeral Home were still in good shape, although the bases were deteriorating.

When the Woodhouse family planned the new reception-room addition to the funeral home they’ve operated in Carroll for more than 55 years, it was an easy decision to remain true to the original elegance of this historic Carroll structure.

Dahn and Woodhouse Funeral Home last year opened the 1,500-square-foot addition, and Jay Woodhouse, funeral director and president of the three-generation family business, said he’s gratified by families’ response to the facility, built onto the north side of the home.

“The families who come in here tell us they feel comfortable. They like it,” he said. “It’s a homey atmosphere. We like that. We wanted to keep it more home-like, so we kept it to the original motif of the building yet made it acceptable and usable for everybody, and it’s worked out well.”

The addition is just one of sweeping changes made recently on the home built as a private residence in 1892 featuring Colonial Revival architecture (see accompanying story on the home’s history).

— Replacing the four 116-year-old, nearly-18-foot columns across the front of the home, located at 705 N. Carroll St.

— More than doubling parking in front of the home, now accommodating nearly 20 vehicles.

— Replacing the steps at the front entrance with a handicap-accessible ramp bearing the Dahn and Woodhouse logo.

— Converting a patio into an all-seasons room.

Jay Woodhouse said, “The main thing we wanted to do in this remodeling project was not change the look of the building at all. We wanted the building to look exactly the same way it did, but we needed to update the siding and columns. It was hard to find siding that matched the wood siding, and it was really hard to find pillars or columns that matched the columns that we had. … We really wanted to stay with the character of this building.”

Jay said he and his wife, Julie, were the primary interior designers.

In the new reception room, the flooring is cherry bark oak Woodland Path installed by Bierl’s Flooring; the cabinetry is all brown maple finished in a Chianti stain; the counter tops are Cambria Bellingham installed by Irlbeck Precision Surfaces; and the walls are a warm and inviting Barcelona beige.

Jay said of the decision to add the reception room — built by Heuton Construction— with capacity for 75 people, “We needed more gathering space for families. Families like to have a room that’s separate from the chapel.”

Bob Woodhouse, Jay’s dad and a founder of the funeral home, said, “It’s nice for families after a service to gather back here and visit with their friends. They can have snacks back here, and we have coffee and ice water for them.”

The room has a refrigerator, and families are welcome to bring in their own food and beverages or arrange catering.

“We wanted to be really careful when we built this room that we weren’t competing with the churches’ fellowship halls and church luncheons,” Jay noted. “This works well for families who don’t have a church or for smaller funerals. We still encourage families to go to their churches and use those fellowship halls. St. Lawrence (Collison Center) and Holy Spirit (Bishop Greteman Center) have built very nice centers, and other churches in town have remodeled their fellowship halls and brought them up to date, so we’re not trying to take away from those. We encourage families to have the funeral services in churches, if they have a church, and to have their luncheon also at their church. But if they want to come back here, we’ve had luncheons in here for up to 75.”

The extra space also accommodates large turnouts for visitations. People don’t have to wait outside. The funeral home capacity, including the reception room, chapel and two side rooms, now is about 225 people.

The addition also has an office area where the funeral directors meet with families to plan services, and there are handicap-accessible restrooms.

“This room has worked out better than I ever imagined it would,” Jay said.

With the expanded parking in front of the funeral home and the handicap-accessible entrance, funeral processions no longer start by having to take the casket down an elevator and out the south side of the home.

“Now we have the families right out the front of the funeral home. All the vehicles are lined in front. It flows really well,” Jay said. “The family can spend time in the chapel, have a service and then follow the casket right out to the hearse and go in procession to the cemetery.”

Replacing the columns on the front of the home posed a tall challenge. After exploring several different companies, Dahn and Woodhouse decided on Pacific Columns of California.

“When (the columns) got here and were put up, they looked exactly like the pillars we took out,” Jay said.

The new columns are made of Endura Stone — considerably more expensive than fiberglass ones that also were available.

“But to really have them look like the columns that were originally on the house, we went with the Endura Stone, which was about twice the cost, but in the end, it’s worth it,” Jay said.

Jay and Bob marveled over how long the original columns, apparently made of wood and plaster mixed with straw, stood up to Iowa’s weather extremes.

“The main parts of the pillars were still solid. It was the bases that were rotting out,” Bob said.

Jay said Wittrock Construction had to do some improvising — “invent some new equipment” — as it replaced the columns during one of the hottest weeks of the summer.

“It was tricky. They’d never done that kind of a project before, and they couldn’t have done a better job of putting that together,” Jay said.

The columns were finished by K&D Painting of Carroll.

“They worked really hard to find siding that matched the wood that was on the house,” Jay said.

The reception room is the latest addition to the original home. Over the years, other projects included an addition on the west side in the mid-1950s and a chapel on the south side in 1980.

The home is the central location for all of the Dahn and Woodhouse Funeral Homes, which also has locations in Glidden, Scranton and Coon Rapids. All services for Carroll, Glidden and Scranton are arranged at the Carroll home, but for Coon Rapids, arrangements can be made at the home there.

Preparation work for all visitations is done in Carroll, and the prep rooms also recently were redone, providing a separate room for hairdressers and installing new ventilation, flooring and equipment.

The Woodhouse family has taken pride living in this remarkable home in Carroll, not only because it’s where they’ve strived to serve families with care and compassion for more than five decades, but it’s also been their own residence all those years. Bob and his late wife, Gloria, raised son Jay and daughters Amy, Ann and Melissa there.

Jay, his wife Julie (Hess) and their children, Michael and Emily, moved back here in 2004 after having lived at the Glidden funeral home. Today Jay’s dad, Bob, lives next door in the historic Sherman House (subject of a future feature story) at 715 N. Carroll St.

Dahn and Woodhouse Funeral Homes, started by Bob and then-partner Merle Dahn in 1962, is a three-generation operation.

Jay, who received a psychology degree from the University of Nebraska at Omaha and a mortuary science degree from the Dallas (Texas) Institute of Funeral Service, was president of the Iowa Funeral Directors Association in 2011.

“We’re a good team,” Bob said of working with his son and grandson. “It’s an honor to have three generations in a business. It’s kind of rare. In our business, people like to know who they’re dealing with. They’ve known Jay (a 1986 Carroll High graduate) since he was a little boy, so people are comfortable with our family.”

The family enjoys getting to know the people and participating in activities in all the communities where Dahn and Woodhouse has funeral homes, Bob said.

Bob said the business continues to see major changes, and Jay noted couple of recent developments have been the popularity of funeral prearrangements and use of technology to plan and share services.

Even after COVID-19, Jay said, “I really think those are things that are going to carry on.”

In another recent trend, families have had services recorded for play on Dahn and Woodhouse’s YouTube channel.

“Michael films the funeral and brings it back to the funeral home, and within 24 hours you can have those on our YouTube channel. We let the families preview them after the funeral,” Jay said. “Some families say, ‘We want to keep that private.’ A lot of families want to share it, make it public. And some families say they don’t want the service recorded, which is fine. I really think the recordings of the funeral services are something that’s going to continue on after COVID.”

After extensive renovation at the landmark Dahn and Woodhouse Funeral Home on Carroll Street, it is a fitting time to trace the history of the…