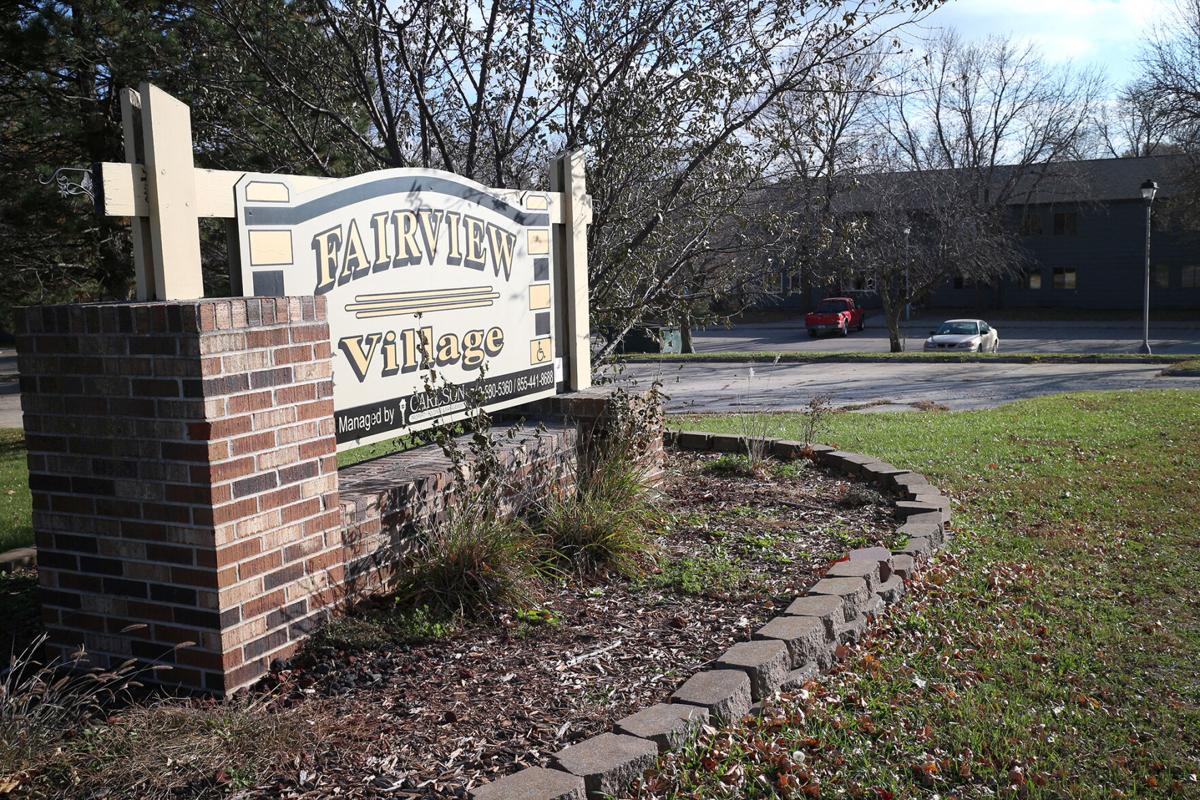 The Fairview Village apartments in the 500 block of East 18th Street is under increased public scrutiny after a spate of violent crimes with firearms.

A Carroll police officer will be stationed at Fairview Village apartments all day every day for the foreseeable future in response to a recent spate of violent crimes involving firearms, City Manager Mike Pogge-Weaver said today.

The consistent police presence began at noon Thursday, he said.

"The city will have zero tolerance, meaning arrests will be made for all minor violations including drinking in public, trespassing, littering, and disorderly conduct," Pogge-Weaver said.

One of the regularly scheduled officers will remain at Fairview unless there is an emergency elsewhere. Pogge-Weaver said that might result in some delays in police response to calls. There are typically two officers on-duty at any given time, he said. The city is not adding an on-duty officer to cover Fairview.

The move comes amid mounting outrage among residents about recent episodes of violence at the apartment complex. A local resident created an online petition to urge city officials to fix the problem.

A string of crimes

On Oct. 5, two women threatened each other with handguns in the complex's parking lot. It happened about 9:17 a.m. while classes were in session across the street at Fairview Elementary School.

The school — which educates children in preschool through second grade — went into a “lockdown,” in which no one was allowed to enter or leave the building, restrooms and hallways were vacated and all doors were locked.

Kamille Elise Garnett, 30, and Glennisha Janancy Myers, 27, who are residents of the apartment complex, were arrested for assault while displaying a dangerous weapon. Myers had a small-caliber handgun, but Garnett had a more-powerful AK-47-style pistol.

Officers who later searched Garnett's apartment found a sandwich bag of marijuana, smaller bags of marijuana, a scale, a vacuum sealer and an unspecified amount of cash, according to court records. There also was a loaded gun within reach of children.

Then on Tuesday night someone shot a man below his waist, and officers arrested four people, including Myers and Garnett, who again was found with drugs and a handgun.

No criminal charges have been filed yet for the shooting itself, but Cliff Derek Urban, 31, of Hammond, Indiana, was arrested for a federal weapons warrant and is awaiting extradition to his home state.

Officers who responded to the shooting saw Myers fighting with another woman, Triesha Monique Jones, 31, of Carroll, and both were arrested for assault.

Garrett was also arrested for disorderly conduct for making threatening gestures toward another woman. A subsequent search of her apartment found a loaded handgun on a couch, unspecified drugs in the kitchen and bedroom, and Garnett's child asleep. Garnett was also charged with child endangerment.

Myers posted $1,000 cash bail to get out of jail on Wednesday. Jones was also released Wednesday on her promise to appear in court.

Later Wednesday, a taxicab driver reported that someone stole the cash box from his vehicle while he was at the apartment complex, and Myers reported that someone had gone into her apartment while she was in jail and stolen some of her clothing. Later that night, someone at the complex reported that there was someone with a gun in a hallway, but officers were not able to locate the person.

Amanda Dreessen, a long-time Carroll resident who lived at the Fairview apartments for a time, is forming a group that plans to lobby city leaders to help reduce criminal activity at the complex.

"With the proximity of the apartments to the elementary school, it does raise the possibility of injury or death at the school," she told the Times Herald. "And there are innocent people that deserve low-income housing. They deserve to live there in peace. There are people there who work who just want the freedom to not worry about being shot, to be outside without fear."

Hundreds of people have signed her online petition to "end the non-stop crime at Fairview Village Apartments."

Those who wish to join Dreessen's group that plans to make suggestions to city leaders can contact her on Facebook.

She said most important for curbing crime at the apartments is to install surveillance cameras, which was something Brad Carlson, whose Spencer company owns and manages the apartment complex, had pledged to do three years ago when he took over the complex.

Carlson declined to comment on the situation until he has all the details about what has transpired.

He has worked with the police department to tamp down the problems — which included a vigorous campaign to ban troublemakers from the property — and last year there were about half as many calls to police than there were in 2016.

"We have found that the management team responds to our concerns quickly, including evicting tenants when authorized by state law," Pogge-Weaver said.

Here are the total police calls in the past four years to the Fairview apartments:

"While the trend has been positive ... continued improvement is needed," Pogge-Weaver said.

Carroll Community school administrators are also working with city officials to find ways to protect their students and staff.

"We believe that students and staff are safe at school," Superintendent Casey Berlau said in a note to parents on Wednesday.