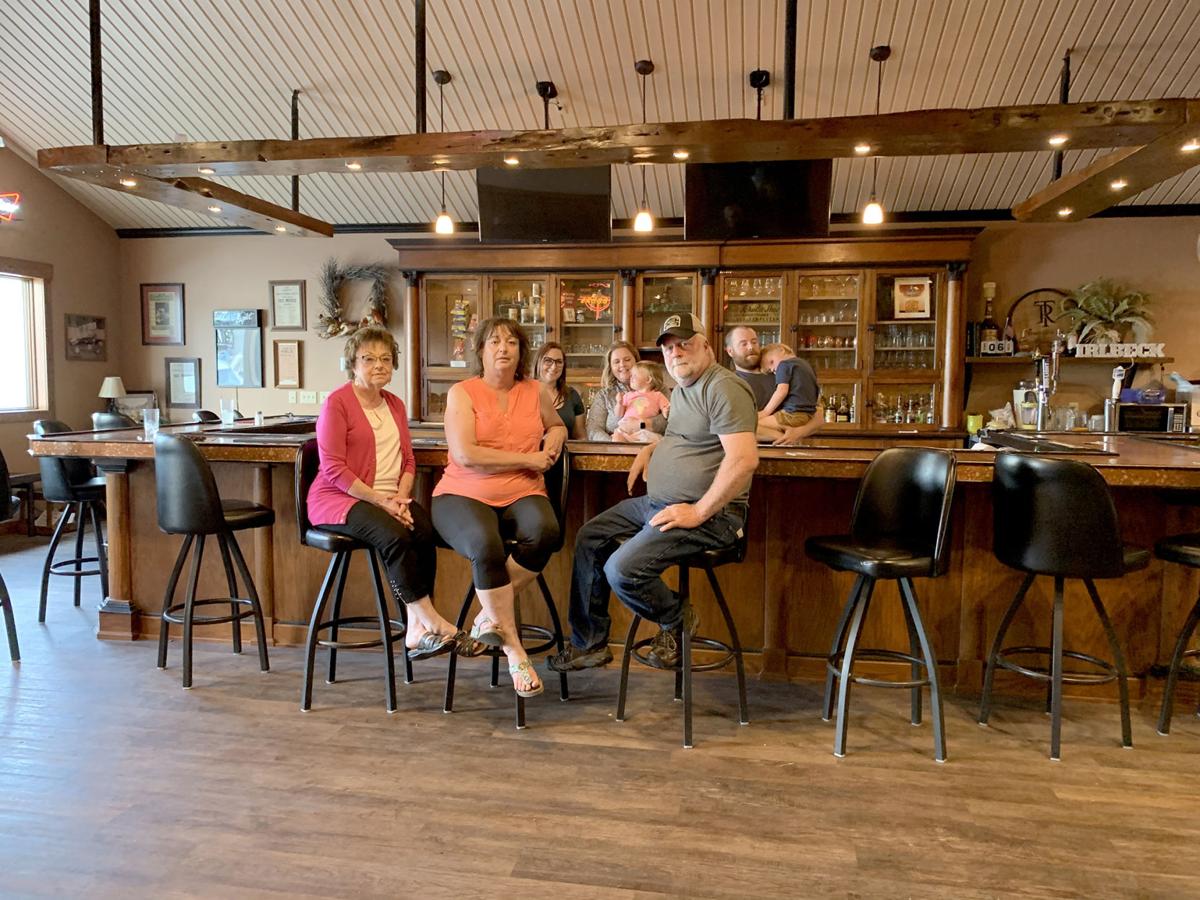 Four generations of the family that runs The Still in Templeton gathers at the bar they replaced in 2014. They include (front, from left) Carol Schoeppner, Shell Irlbeck, Rooster Irlbeck, Samantha Irlbeck, Nicci Kathol, holding Wrenn Kathol, and Zach Kathol, holding Oliver Kathol. 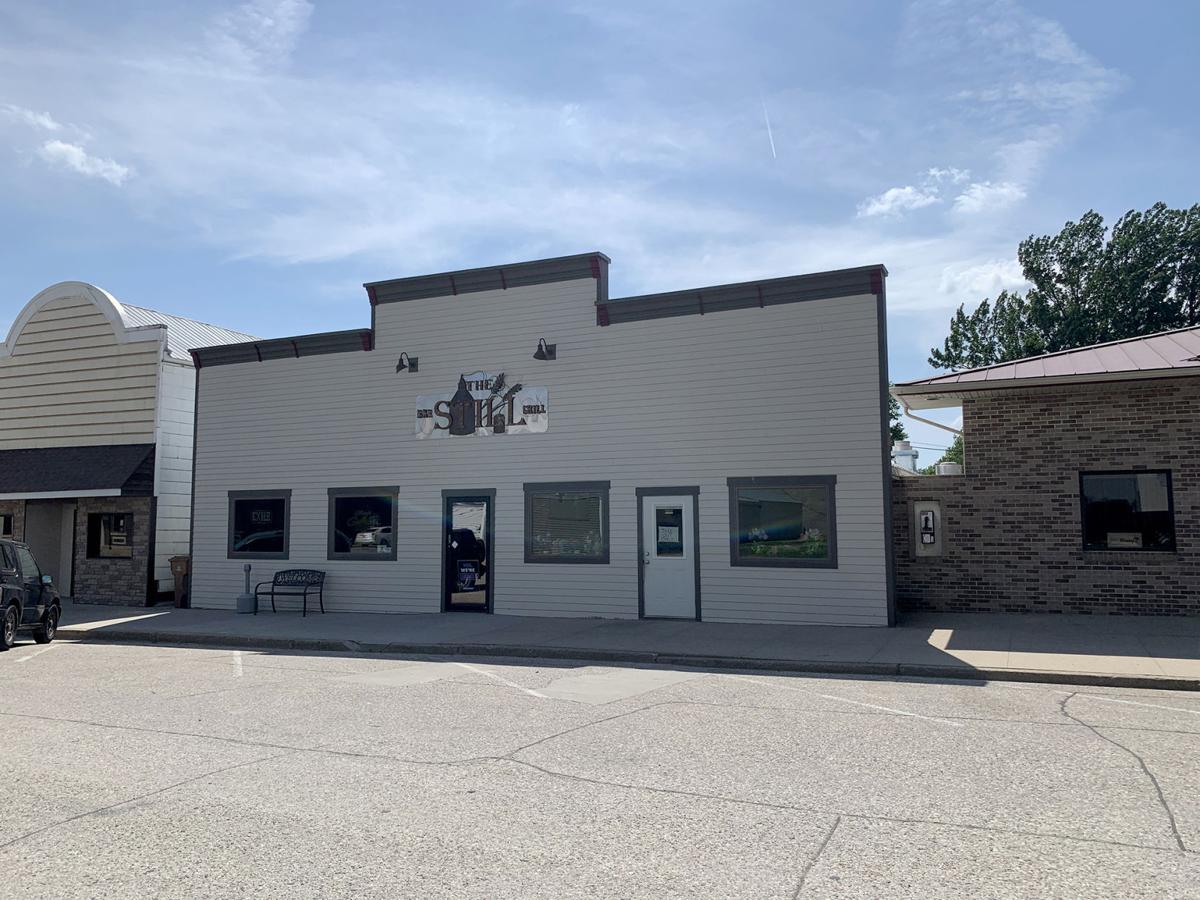 The Still, a restaurant and bar on Main Street in Templeton, is set to close on Aug. 1.

TEMPLETON: Shell Irlbeck will leave with memories of “tremendous” support from locals when The Still in Templeton closes.

Her history with the restaurant is a long one; she previously worked in the same restaurant when she was 21 years old, renting the space and running the kitchen. She said she went to work for Hy-Vee when her daughters were old enough for school, also serving as a health inspector in Carroll, Crawford and Greene counties, but for the last 16 years, she and her husband, Gary “Rooster” Irlbeck, who also works for Seaboard Foods of Iowa, have been running The Still in Templeton.

Citing health problems that need to be dealt with and the desire to spend more time with family, Shell and Rooster will close the restaurant and bar Aug. 1, with only take-out orders until then. They’re looking for a buyer for the business.

It’s a family operation. Their daughters, Nicci Kathol and Samantha Irlbeck, work the business with them in addition to their other jobs.

Nicci is married to Zach Kathol and they have two young kids, Oliver, 3, and Wrenn, 1-and-a-half.

Shell praised the restaurant’s other staff.

“We have the absolute best, best help,” she said. “Our waitresses are fantastic, and if anybody wanted to come in, I think they’d have a ready-made staff.”

She praised Lisa Jensen, who had helped Irlbeck in the kitchen at The Still for 12 years and who died in May.

“She’d work all three nights if I needed her to, and she died in a tragic accident,” Shell said, adding that her daughter Nikki and Sara Anderson have been invaluable in filling in.

She added, “You, know I want this place to be open, and I want people — we want people to come in, don’t we?”

“Most people think that ⁠— well, when you move to Templeton you just become part of the family, and you get a golf cart,” Shell said.

She and other members of her family joked it’s almost a “requirement” to have a golf cart to live in Templeton.

The bar would open six or sometimes seven days a week, closing some Sundays, while the restaurant opened only on Thursday, Friday and Saturday nights. It will remain open for takeout on those days until the scheduled close.

Among the times the bar would open on Sundays were for “Sunday Fundays.”

On those days, Rooster said they would open the bar from around 1 to 6 p.m., people would donate food, and any money taken in would be donated to various philanthropic causes — on occasion needy families, families who had suffered an accident or hardship, for honor flights, or the Wounded Warrior Project, among other public-spirited causes.

Rooster added the family has plans for one final Sunday Funday before the restaurant closes up permanently, but he said he was not sure when that would be.

Throughout the state and the nation, the coronavirus pandemic has proven calamitous for the restaurant industry, with the number of those employed in the food and drink service sector dropping by 6.1 million people in March and April, according to the Bureau of Labor Statistics. The National Restaurant Industry estimated in March the economic impact of the lockdown on the industry could reach as high as $225 billion.

Despite the toll the virus-induced lockdown has taken on the wider industry, Shell said The Still is not shutting down because of coronavirus.

“My daughter Nicci works at the hospital in Carroll, and she came home and was telling me that people were stopping her at the hospital, saying, ‘Oh it’s just such a shame that your parents have to close the restaurant and bar because of COVID,’ and that is not the case at all,” she said.

Irlbeck added that her knees are to the point she can’t “take the hours on them anymore.”

“I needed a knee replacement quite a long time ago, and I never did anything with them and now, now I’m to the point where I have to have them done,” she said.

Simply put, Shell said they decided it was just time to close.

“We talked about it and we just feel like it’s time,” Irlbeck said. “Time to go back to being part of the public again, and having a weekend we can take off and go on do something and watch the two little ones if Nicci wants to go do something with her husband Zach.”

Shell said even while being open only for take-out, the restaurant continues to be busy.

“We’re packed every weekend and we’re still only doing takeout and the phone rings nonstop,” she said recently. “I just talked to a lady today, she said she tried for 20 minutes to get through, it’s just hang-up, ring, hang-up, ring. And it was like that when we were open, too; I mean the takeout food was just as crazy as — that side would be packed, this side would be packed. People would be sitting on the bench waiting to sit down.”

Family members who helped around the business will leave this chapter of their life with fond memories, though. Shell’s mother, Carol Schoeppner, said she met people who have become “life-long friends.”

Schoeppner makes the desserts for The Still, which come with every meal. People have their choice of banana bars, rhubarb upside-down and strawberry tortes, among others.

Shell said she’ll miss preparing food as often as she was.

“I’ll miss the cooking,” she said. “Because I really love to cook.”

She added her grandkids would be in The Still on nights it was open.

“Oh yeah, they’d be runnin’ around here once in a while,” she said. “Oliver, he’d sit up next to one of the regulars and kind of just throw his feet up and just sit there and have a long conversation with him.”

“All of our regulars were close — I mean, this whole town is what we’d call the regulars,” she said. “I mean, there is no stranger here in Templeton. And we can’t thank them enough for all the support over all these years.”

Of closing during the time of the pandemic, Shell agreed it is “bittersweet” but voiced hope for the future.