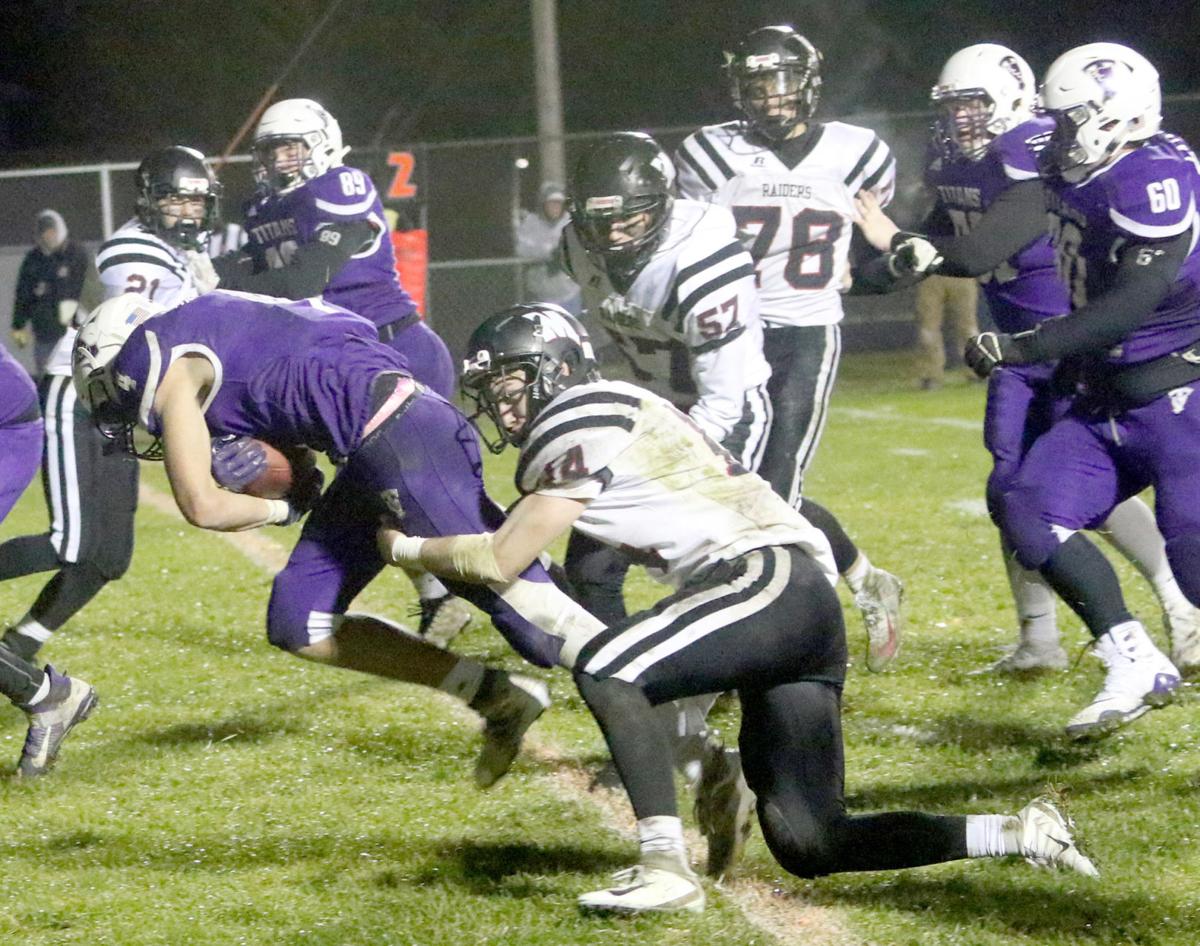 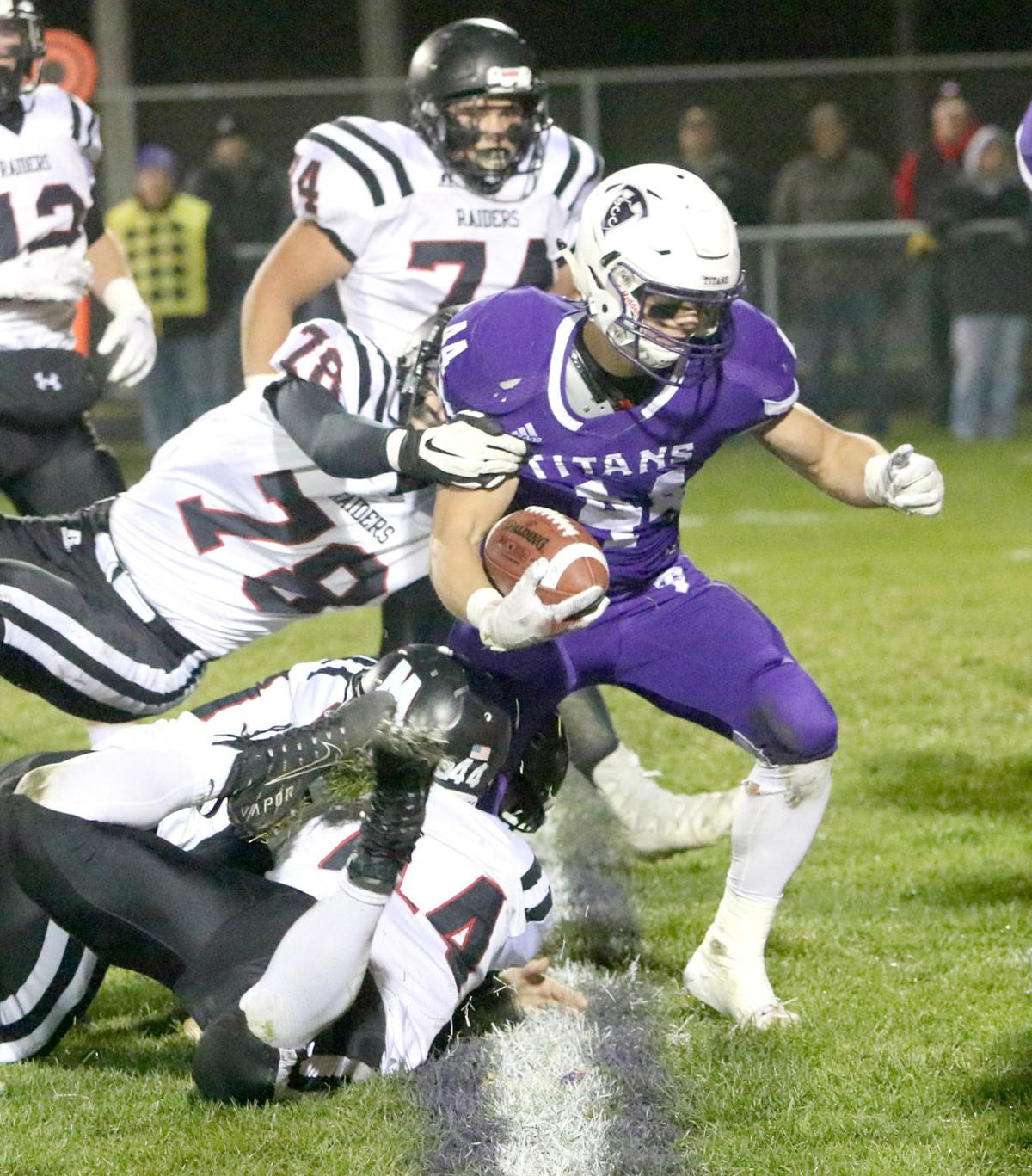 South Central Calhoun running back Landon Schleisman (center with ball) powers past the Mount Ayr tackle attempts of Cole Clymer (78) and Keelan Klommhaus (on the ground) during a first half-play in last week’s game. Schleisman enters this week with a team-leading 702 yards on the ground for the Titans.

South Central Calhoun running back Landon Schleisman (center with ball) powers past the Mount Ayr tackle attempts of Cole Clymer (78) and Keelan Klommhaus (on the ground) during a first half-play in last week’s game. Schleisman enters this week with a team-leading 702 yards on the ground for the Titans.

This is what the playoffs were made for. Two undefeated teams battling with a trip to the promised land on the table.

When South Central Calhoun (10-0) travels to play Van Meter (10-0) on Friday night it is promising to be one of the better football games in the state.

Van Meter enters the game as the No. 1 ranked team in the IHSAA RPI rankings. They also feature four shutouts on the season, and haven’t given up more than 12 points in a single game.

South Central Calhoun boosts four shutouts of their own on the season. Until last week, the Titans hadn’t given up more than eight points in a single game.

The two teams have two common opponents. Both played Madrid this season. With South Central Calhoun winning 39-7 in week 7. Van Meter blanked the Tigers 42-0 in week 3. Both teams also have wins over Mount Ayr.

When Van Meter beat Mount Ayr they used three-fourth quarter scores to gain a 28-0 win. South Central Calhoun had three second quarter scores that lifted them past the Raiders, 56-22.

These two teams are commonly found near the top of their class rankings year after year.

For Bryan Case and the SCC Titans, they know they will have a tough task tonight.

“They are good,” Case said about Van Meter. “Their rated number one in the RPI for a reason. They have all of the pieces and they have the know-how to compete. They’ve been in the dome five out of the last six years so obviously they know what it takes at this point of the year. Their offense is dangerous and extremely difficult to defend.”

What makes their offense hard to defend against is the number of weapons they have. It all starts with quarterback Anthony Potthoff who has completed 70 of his 100 passes this year for 1,211 yards. He’s thrown 14 touchdowns and zero interceptions.

“Their quarterback manages the game and is effective with his decisions.,” Case said. “He has 14 touchdowns on the year to 0 interceptions. They want to run the ball first, but they can do about anything.”

If Potthoff’s arm wasn’t dangerous enough, his legs add to the threat level. Potthoff is the second-leading rusher for the Bulldogs with 717 yards on the ground and 12 touchdowns.

Because of Potthoff, Case stressed that the game will be one that is fought in the trenches.

Both teams have plenty of size around the offensive and defensive line. That will be the point of attack where the battle between the Bulldogs and Titans will be fought.

“We have some good size ourselves, so I think the trenches will be a good match-up,” Case said. “It will come down to technique and drive for control on line of scrimmage that will make the difference.”

As Case said, Van Meter will want to run the ball first. They will be doing so without their top runner.

Ian Abrahamson led the Bulldogs this season with 822 yards on the ground and 14 touchdowns. But he is sidelined for the rest of the year with an injury.

2020 Bears vision: Believe it or not, QB isn't the greatest offseason need in Chicago

Hot? Not? However you view Packers' Aaron Rodgers, he has Super Bowl in his sights

In last week’s win over Pella Christian it was Dalten Van Pelt who led the way rushing the ball. That doesn’t surprise Case, who said one runner at Van Meter can carry the load.

“Dalten has had a lot of carries throughout the entire season, so there really isn’t any drop-off,” Case said. “They’re a good team who has a lot of depth and they rotate kids to keep them fresh. We will have our hands full with their entire team.”

In order for the Titans to have success tonight they are going to have to break through a 4-4 defensive alignment of Van Meter.

Quarterback Cole Corey hasn’t been a slouch either. He’s connected on 50 passes for 811 yards and seven scores this year (five interceptions).

As a team the Titans will have to continue to do what they’ve always done under head coach Bryan Case. Adjusting to the game that is developing in front of them.

“As a staff, we’re always making slight adjustments throughout the entire game.,” Case said. “To the naked eye, it probably doesn’t seem like much, but a slight tweak here and there can make all the difference in the outcome. We will just keep doing what we’ve been doing for the last 25 years and hopefully that will be enough to help us come out on top.”

Both teams will be battling for a spot in the dome, a place the Titans haven’t been since they became South Central Calhoun. Friday night will be a fight that is sure to be memorable.

“We have a huge challenge in front of us, but our kids will be prepared and we are looking forward to the opportunity,” Case said.