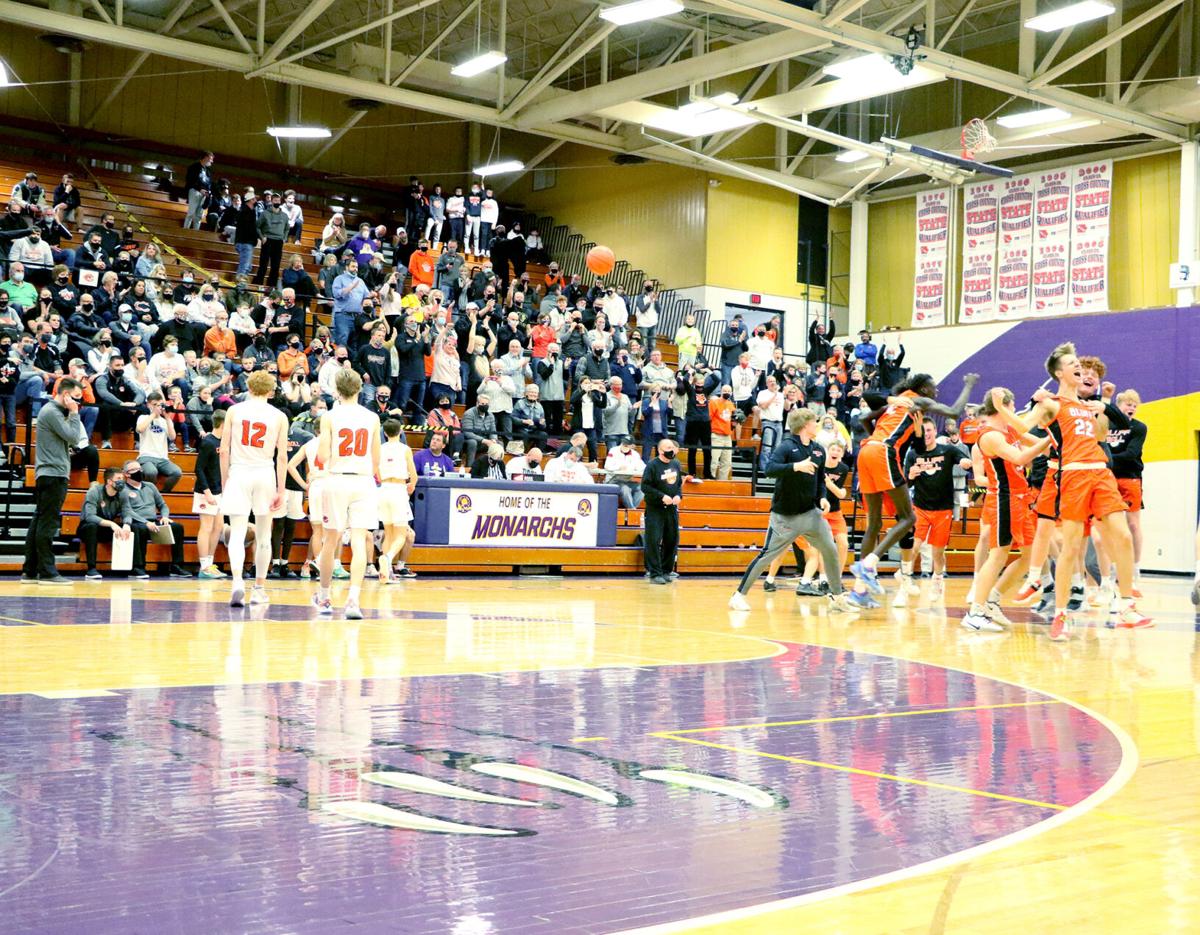 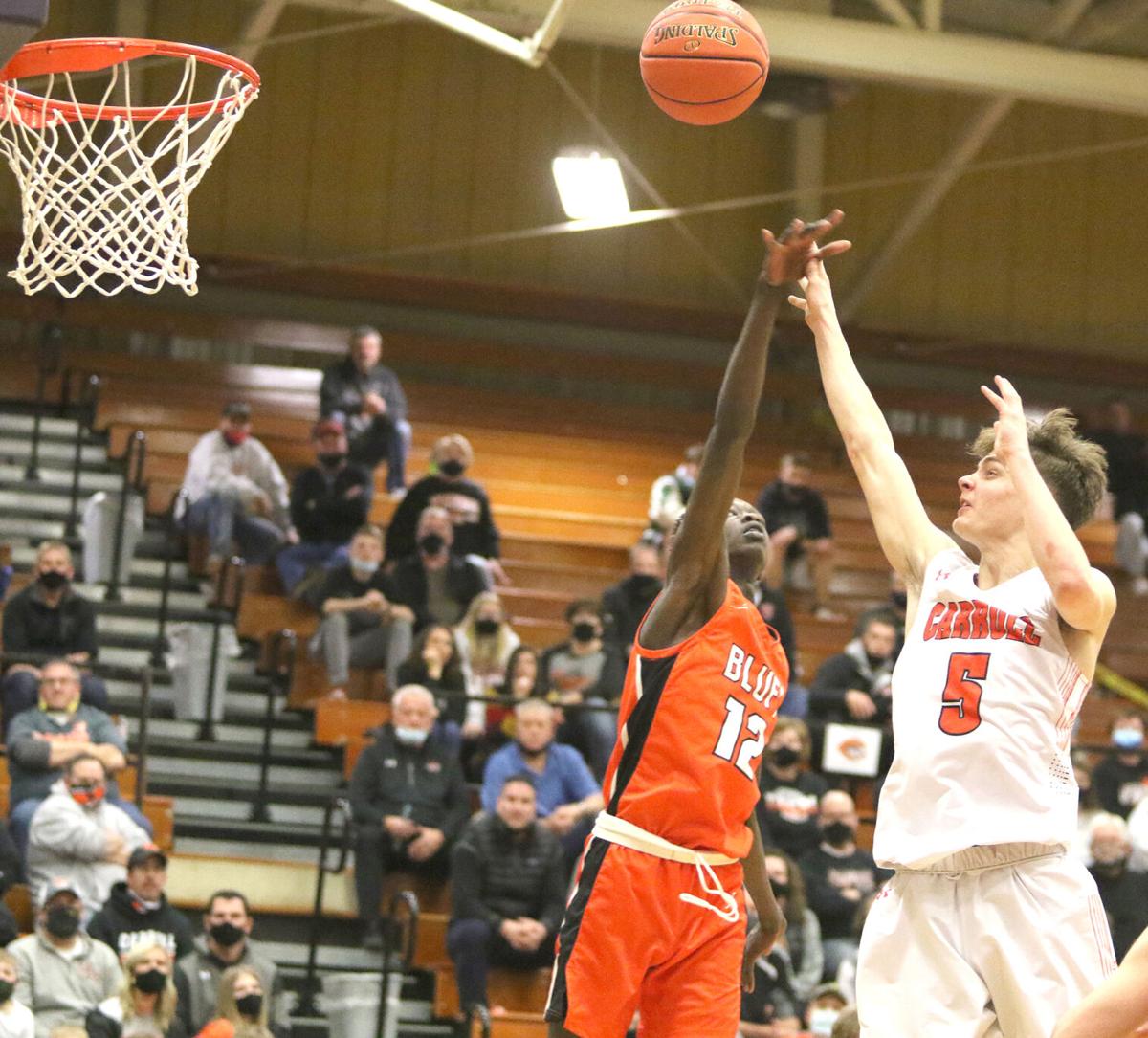 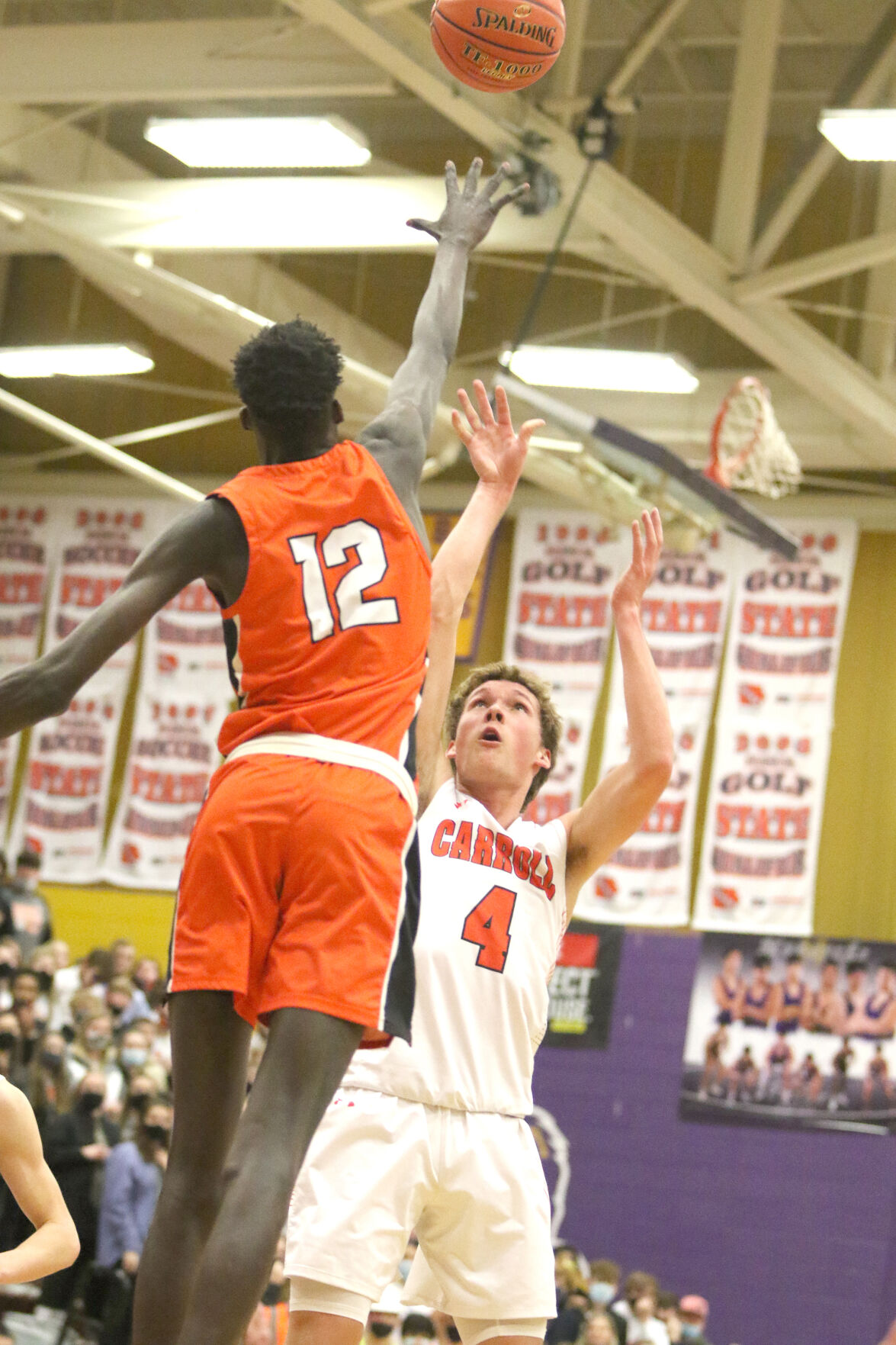 Carroll High senior Colby Christensen (4) watches as his shot sails over the head of Sergeant Bluff-Luton’s Majok Majouk (12) in a March 1 game played in Denison. 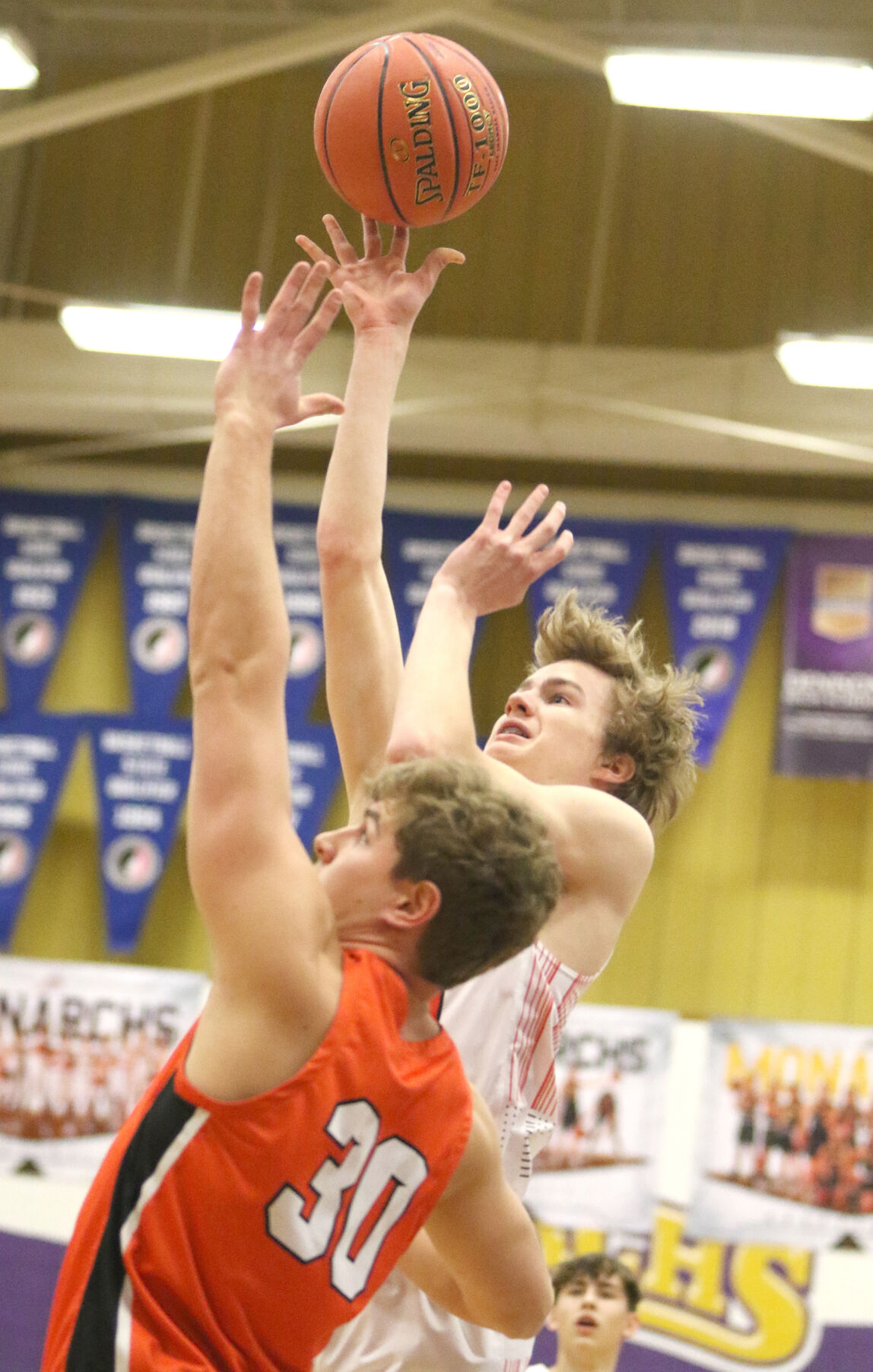 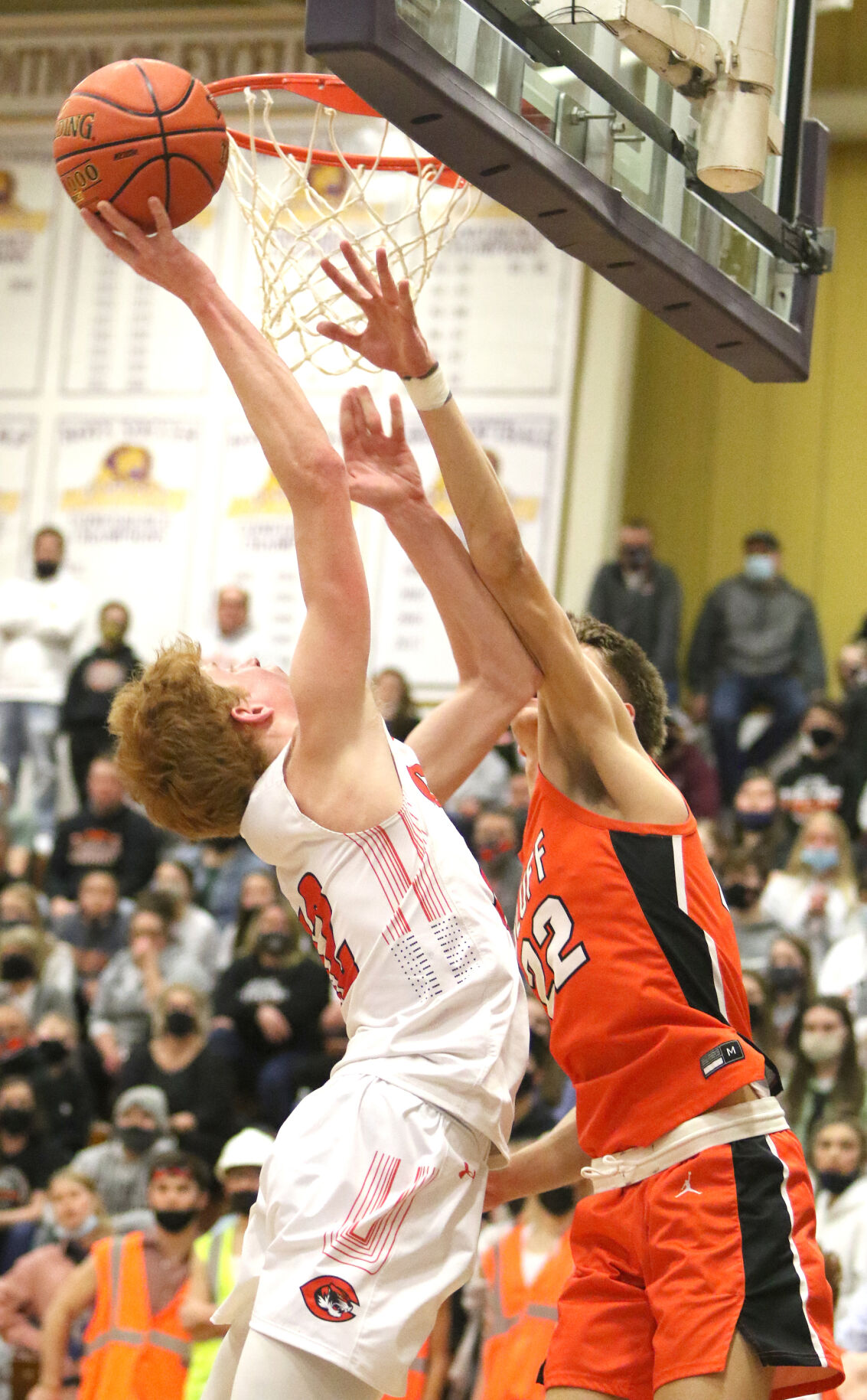 Carroll High senior Colby Christensen (4) watches as his shot sails over the head of Sergeant Bluff-Luton’s Majok Majouk (12) in a March 1 game played in Denison.

DENISON: Success of this kind hasn’t been seen in nearly a decade, yet the memories of this class, this run, will be tainted.

The harshness of sports history might always remember the 2020-21 Carroll seniors for what they didn’t do, rather than what they did do.

Their last game was one of the more-ugly contests ever played.

For a chance to go to the class 3A State tournament, the second-biggest class in Iowa High School competition, neither the Tigers nor the Warriors were able to score in a head-scratching 36-29 Sergeant Bluff-Luton victory.

“The goal every year is to get to State. Unfortunately, we weren’t able to get our goal and that sucks for our seniors.”

Even in a defeat that seemed to push defensive basketball ahead by a decade, and asked the run-and-gun energy-laden offense of the 21st century to take a seat, the seniors on the Carroll team reminded everyone why they were able to win so many games in their careers.

Despite trailing most of the first quarter 10-1, Carroll fought back and made a game out of it.

Things turned around when Kaleb Booth, a junior for Carroll, hit a three-pointer to open up the Carroll basket. From there, senior Kelin Jones drove into the inside of the lane on back-to-back possessions, drawing fouls both times.

Jones sank all four of his free throws and gave the Tigers life, even though they trailed 12-8 after the first quarter.

“We couldn’t get a shot to fall,” Bissen said about the first half of the game and especially the opening eight minutes. “Sergeant Bluff-Luton was really tough on defense, and we weren’t quite ready for their length. They caused fits for us not being able to score. We battled back and took a halftime lead.”

In spite of a slow start, the battle-tested Carroll seniors weren’t going to fall down and let SB-L run away with the game.

The second quarter started off with lightning as Carroll scored a quick basket to get within two. The Warriors answered with three points to extend their lead 15-12. Then both baskets might as well have stepped outside to update their social media pages. For nearly seven minutes, neither Carroll nor Sergeant Bluff-Luton scored.

Once the scoring started again, it was all Carroll, as the Tigers were able to claw their way back and take a 16-15 lead at halftime.

Just like so many other games throughout their career, the Carroll seniors couldn’t be held down for too long.

“I can’t doubt the effort of our team tonight,” Bissen said. “We rebounded like crazy; we did what we could to slow down Sergeant Bluff-Luton. Unfortunately it just wasn’t enough tonight.”

Carroll led most of the third quarter, but a late quarter, 4-0 run by SB-L gave the Warriors the lead by two.

Late in the fourth quarter, a final chance for Carroll came when Booth was able to tie the game at 25 with three minutes left. However, a SB-L three (their only three-pointer of the game) gave the Warriors a lead, which they would not lose for the rest of the contest.

“Sergeant Bluff-Luton is a tricky team, because they can guard the arc really well, but their length allows them to guard the basket as well,” Bissen said, explaining what caused Carroll to only make 26 percent of their field goal attempts on Monday night. “We’ve been pretty good all year at being able to attack the basket and get some easy looks inside. Tonight there were no easy looks. Usually if a team gives up one thing, you can do the other thing. Sergeant Bluff-Luton, though, they guarded around the basket with their length and they guarded the arc really well.”

Because of the defensive ability of the Warriors, Carroll wasn’t able to settle into its normal offense — an offense that Carroll had nearly perfected over the last four seasons, that led the Tigers to memorable wins, including a Dec. 18 overtime road win against Ballard (who is the No. 1-seeded team in the class 3A tournament) earlier this year.

Carroll fought but just couldn’t get that final step, the one that would have cemented this year’s Tigers as one of the greats in school history.

Still, a 75-18 overall high school record, three conference titles and eight total conference losses in four years is nothing to frown about.

The State tournament may get a lot of press for naming champions, but continued success outlives one season. For the Carroll seniors, they were able to cultivate success that classes of Carroll High basketball players haven’t been able to claim since at least the 2011-12 school year.

“There were a lot of tears and frustration in the locker room after the game,” Bissen said, describing what the locker room was like after the heartbreaking game. “These seniors have to be reminded that they accomplished a lot in their four years. Unfortunately, we didn’t get our ultimate goal of getting to the State tournament, but the seniors did a lot of things really, really well. We won some conference championships in there and had just a lot of memories from the regular season games and all the times they were able to compete.

“Hats off to the seniors for what they have given to the program and how much they have paved the way for the underclassmen. I just really feel for these seniors. They just really deserve to get to State — they’ve battled and done everything we ever asked of them. It’s just a tough one to take tonight.”