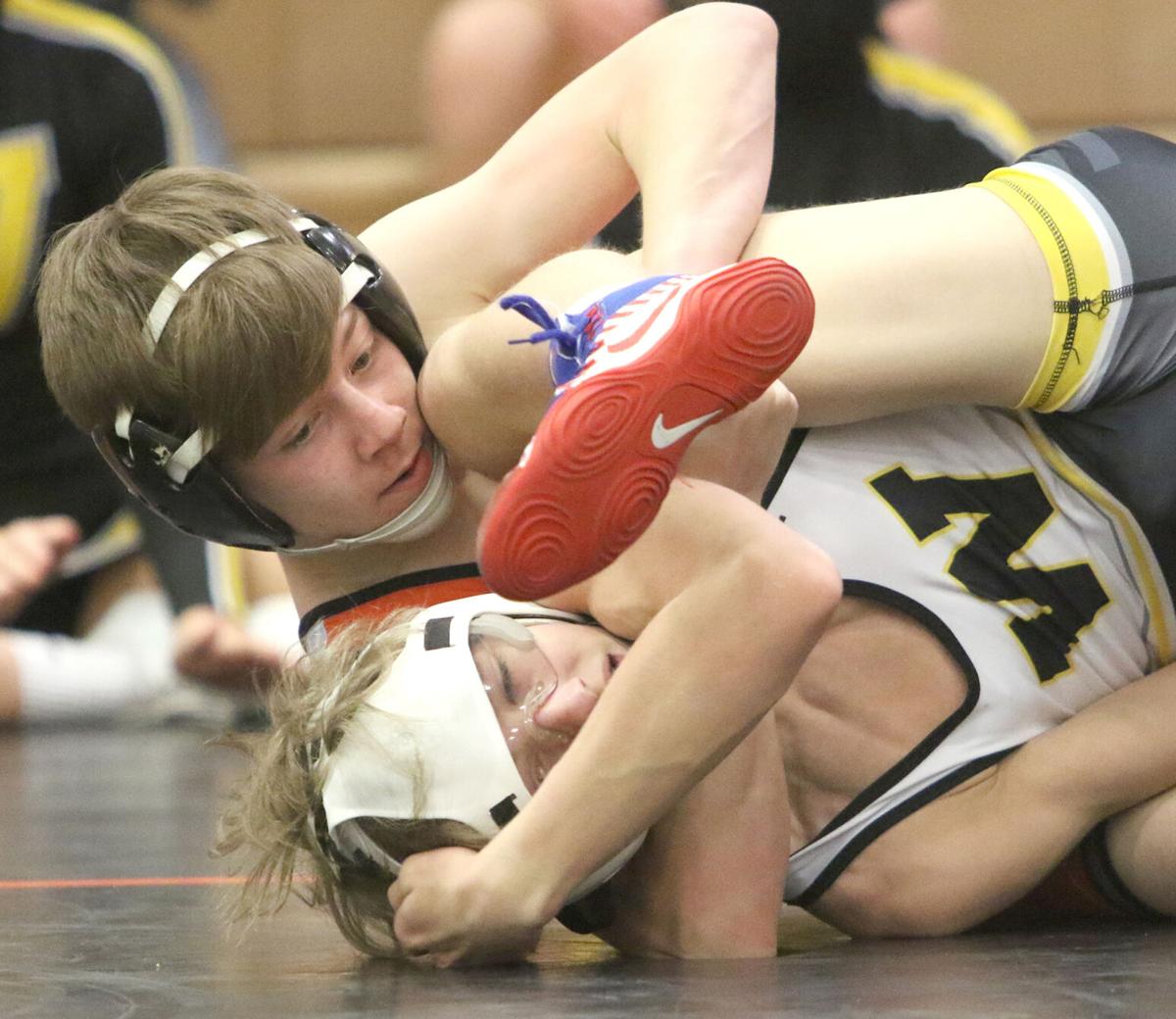 Carroll High’s 106 pound wrestler Cael Nelson locks up a Winterset wrestler during a meet held at Carroll High in January. The freshman for the Tigers was able to qualify for his first State wrestling tournament. 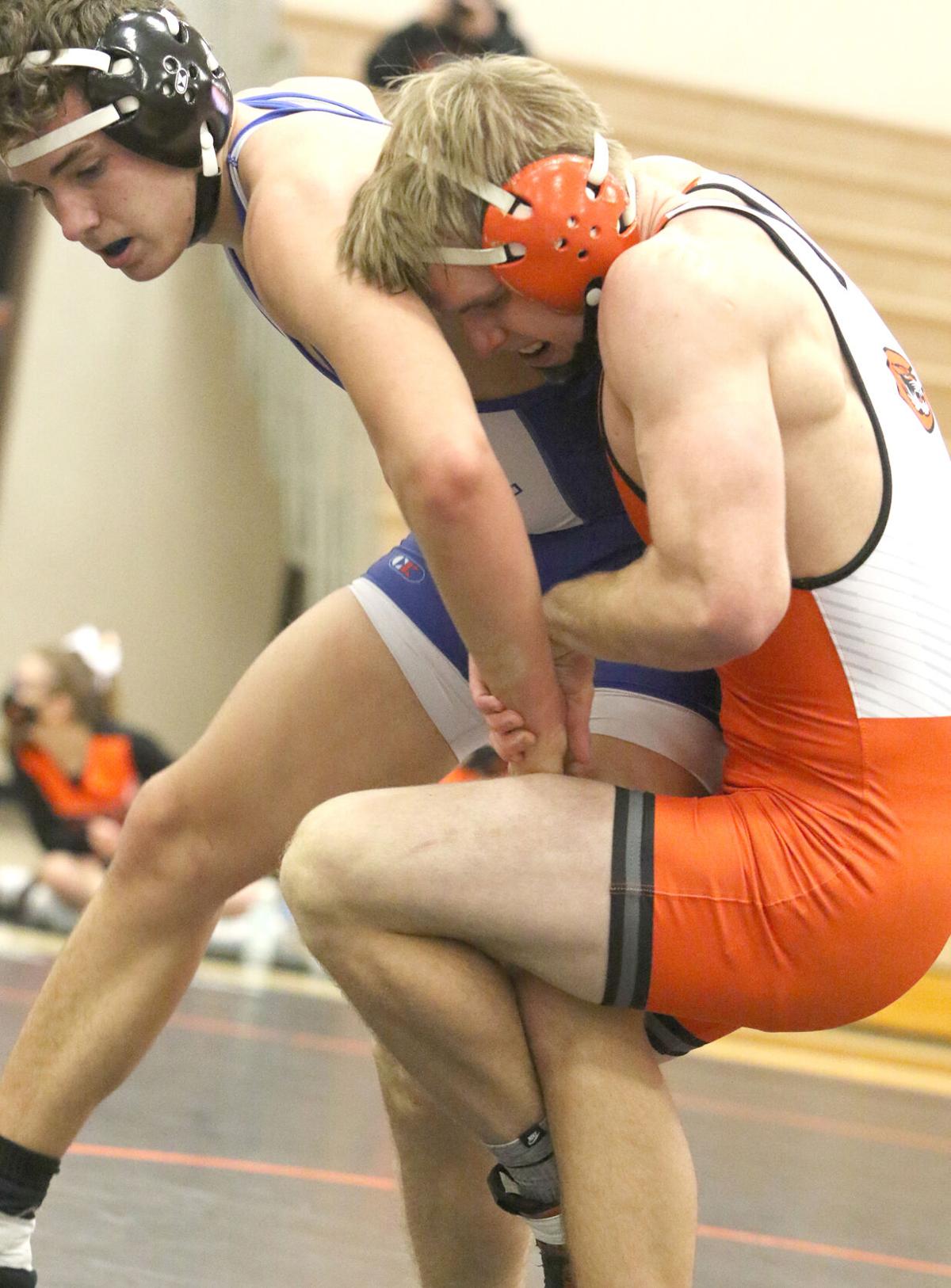 Carroll High senior Abraham Dirkx (right) tries to bring down a Bondurant-Farrar opponent during an earlier match this season. Dirkx is making his third-consecutive appearance at the State wrestling meet. 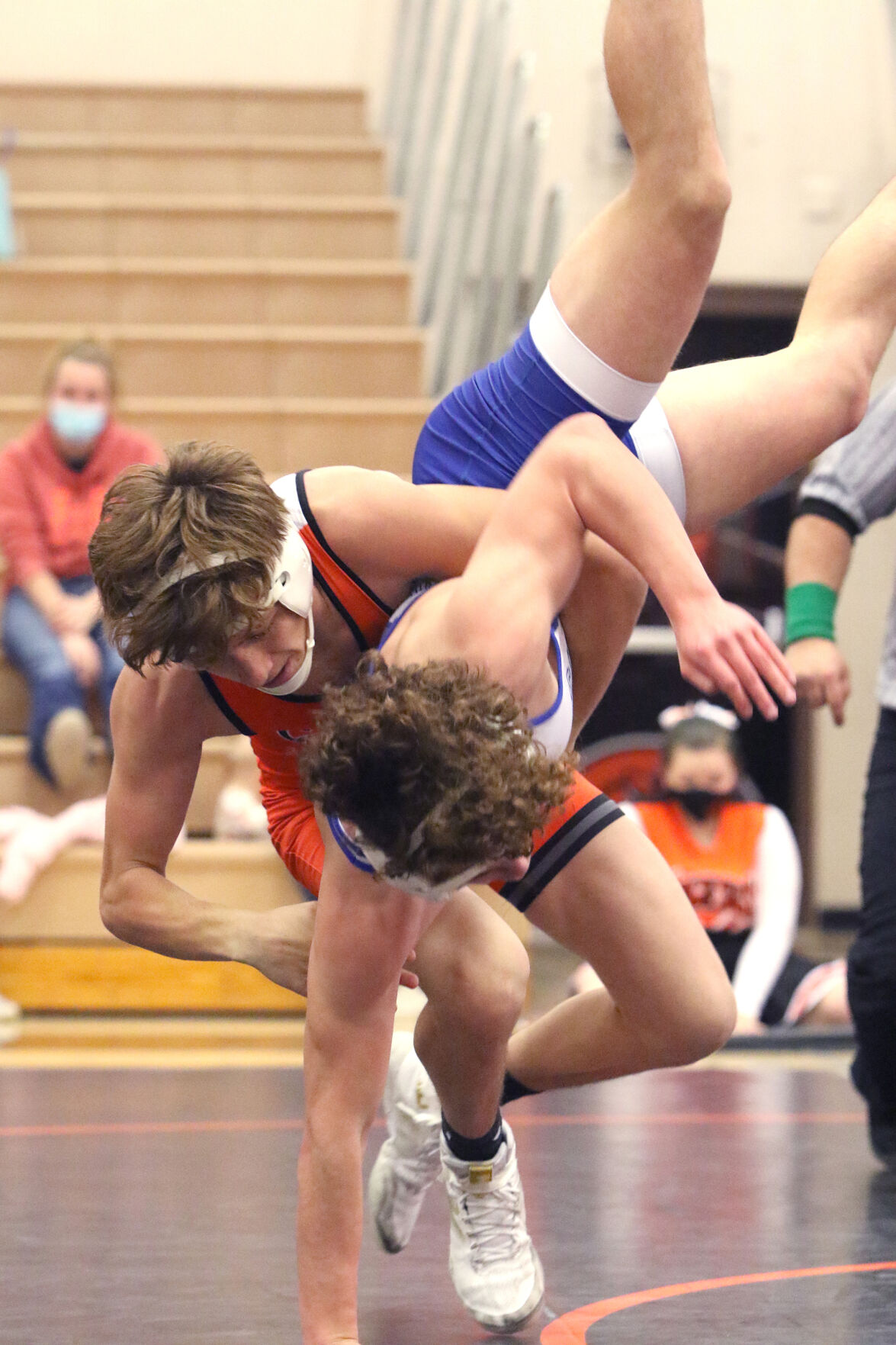 Carter Drake (left), a 138-pound wrestler for Carroll High, slams a Bondurant-Farrar opponent down to the mat during a December match held at Carroll High. The junior qualified for his first State wrestling meet. 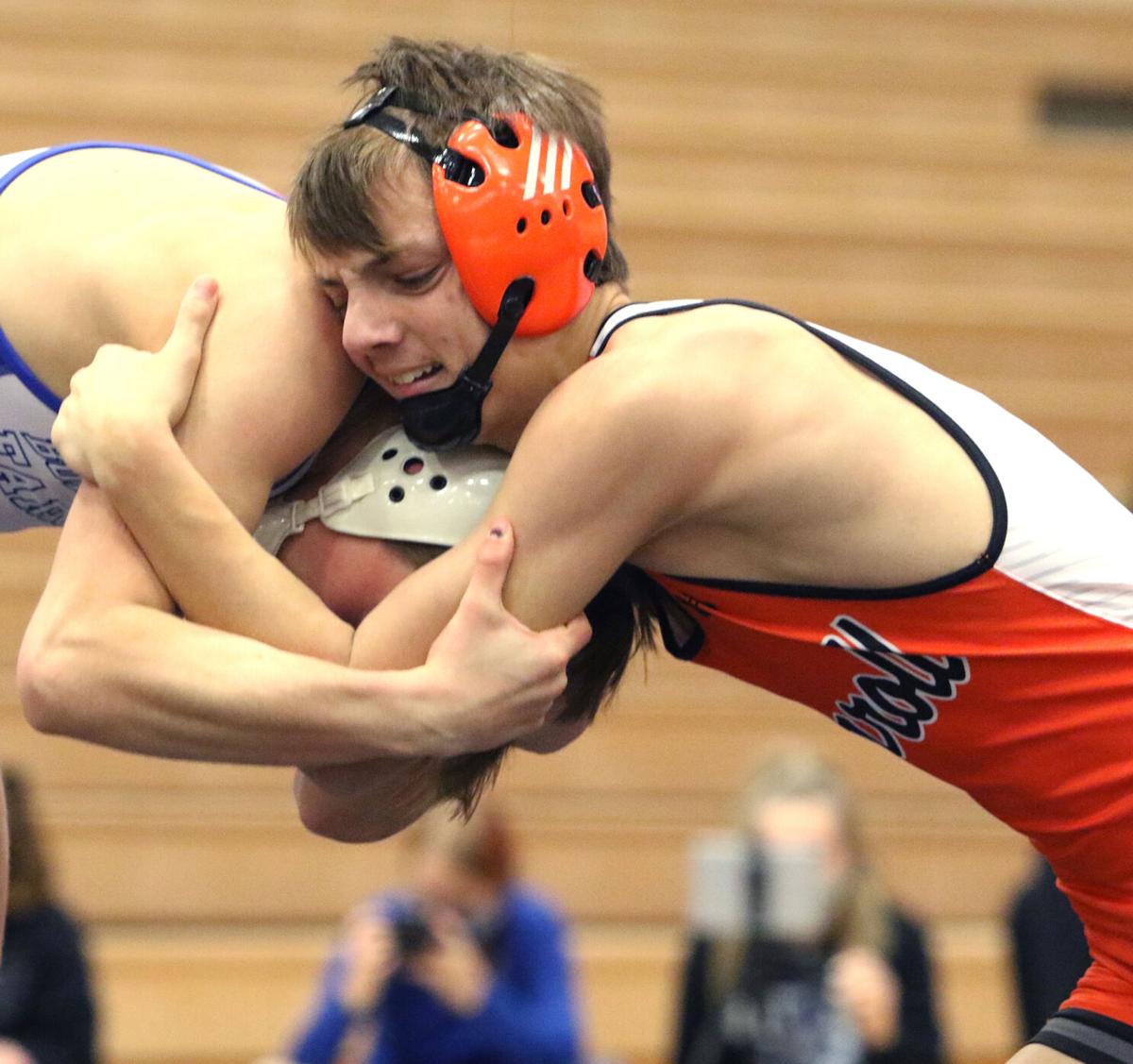 Carroll High 126-pound wrestler Jaxson Kuhlmann locks up with a Bondurant-Farrar wrestler during a meet held in December at Carroll High. Kuhlmann was able to qualify for his second-straight State wrestling tournament this year. 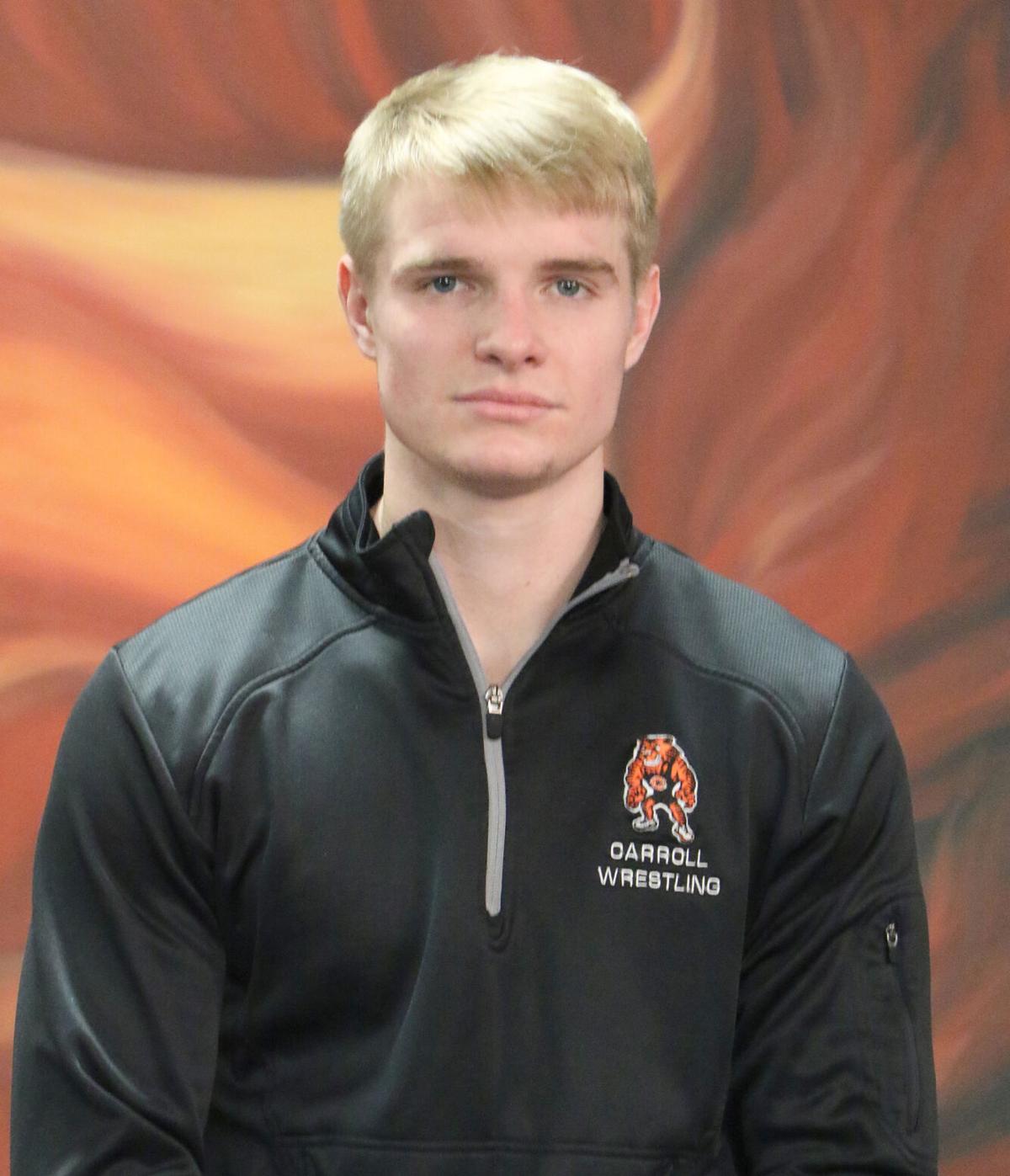 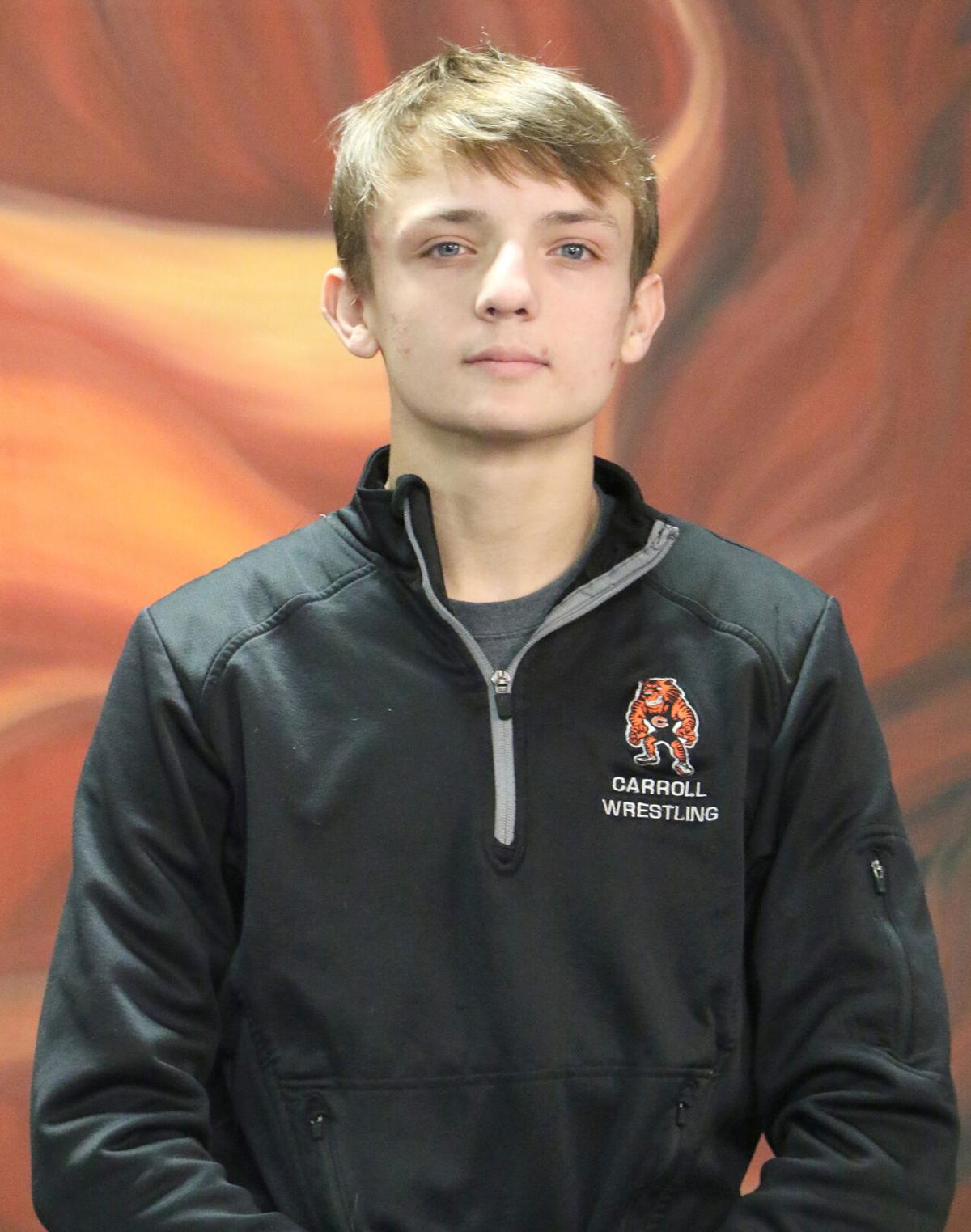 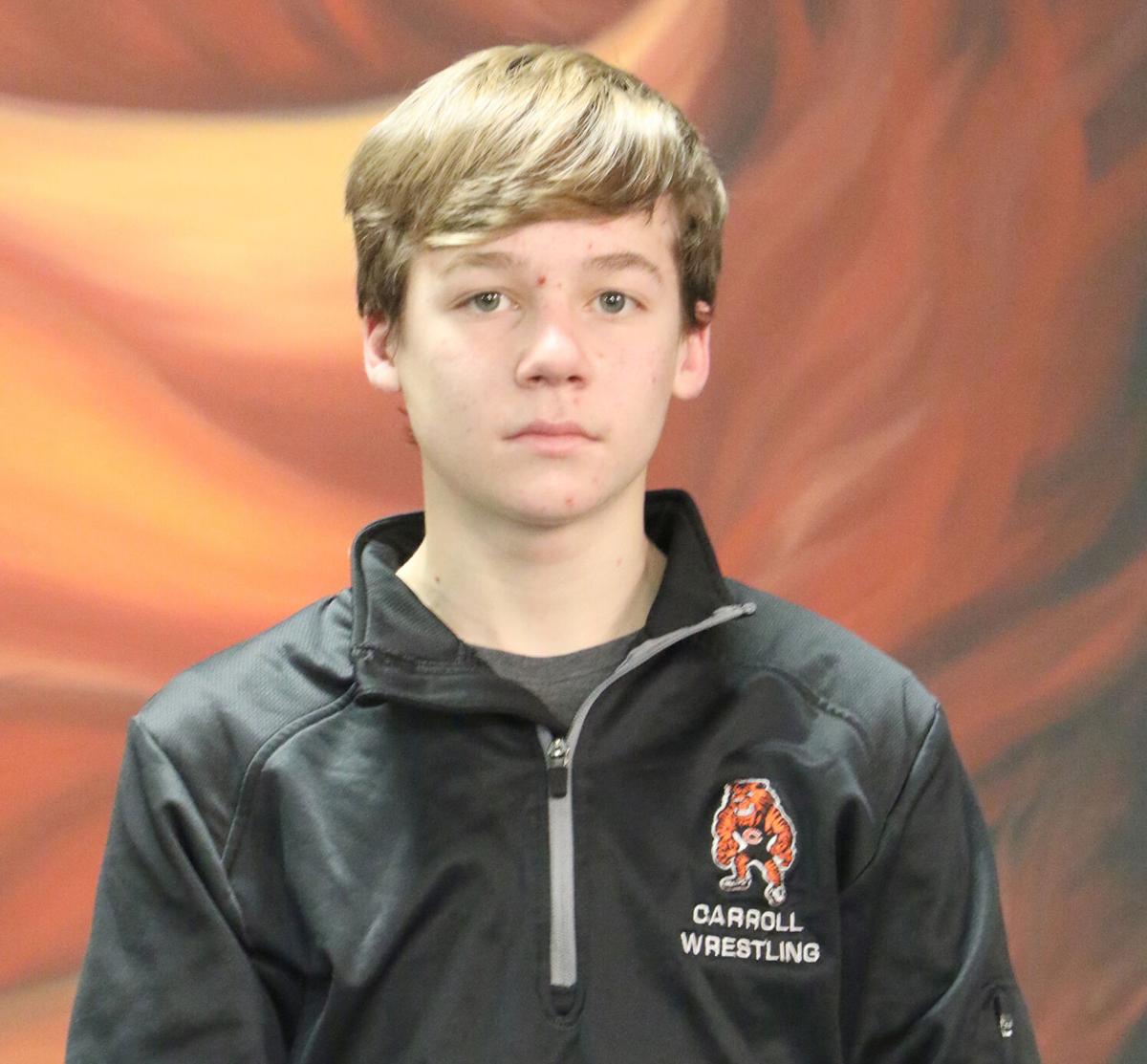 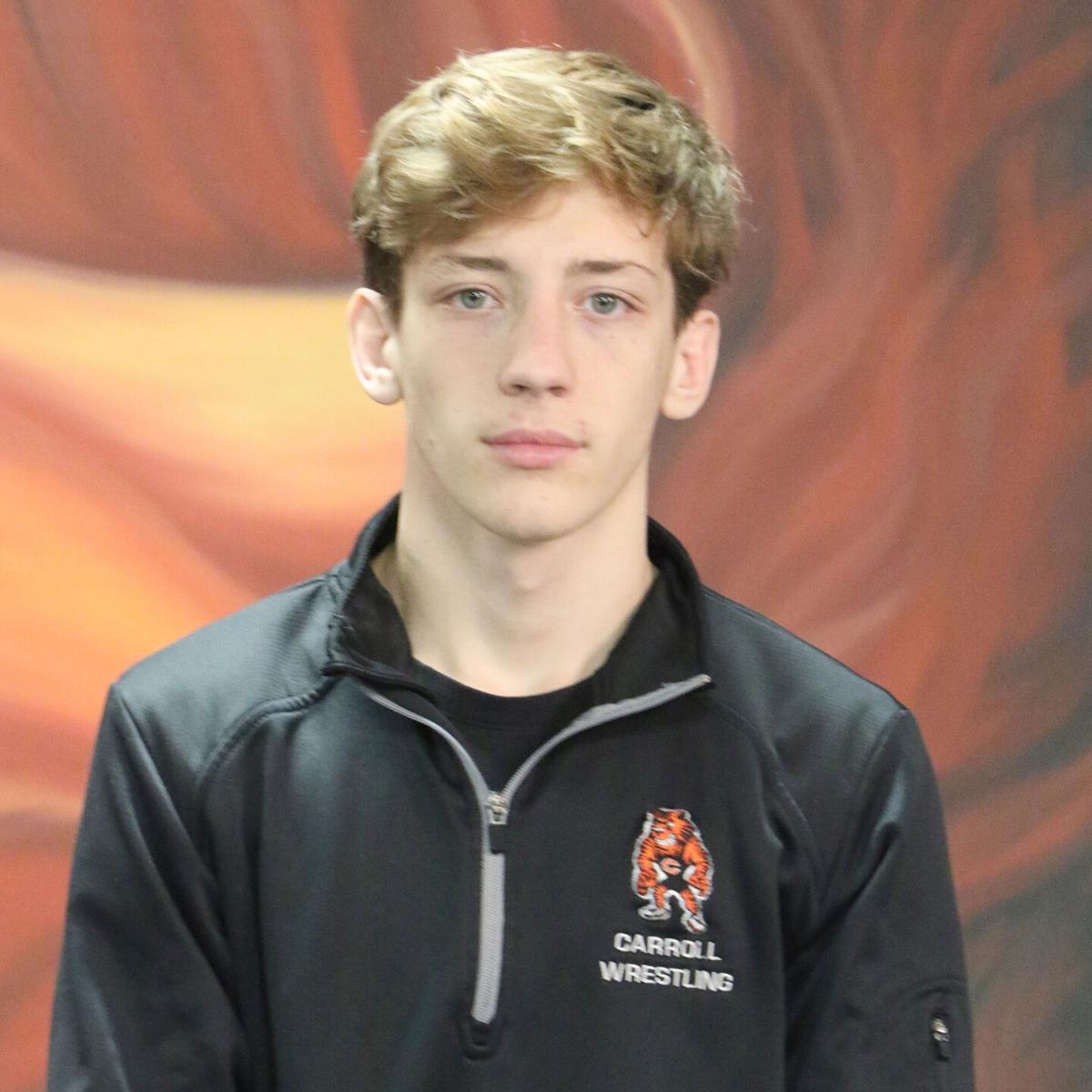 Carroll High’s 106 pound wrestler Cael Nelson locks up a Winterset wrestler during a meet held at Carroll High in January. The freshman for the Tigers was able to qualify for his first State wrestling tournament.

Carroll High senior Abraham Dirkx (right) tries to bring down a Bondurant-Farrar opponent during an earlier match this season. Dirkx is making his third-consecutive appearance at the State wrestling meet.

Carter Drake (left), a 138-pound wrestler for Carroll High, slams a Bondurant-Farrar opponent down to the mat during a December match held at Carroll High. The junior qualified for his first State wrestling meet.

Carroll High 126-pound wrestler Jaxson Kuhlmann locks up with a Bondurant-Farrar wrestler during a meet held in December at Carroll High. Kuhlmann was able to qualify for his second-straight State wrestling tournament this year.

Perhaps no other single dollar has provided so much motivation.

The pursuit of money has both powered the captains of industry and led to ruin in numerous parts of life. For the Carroll Tigers wrestling team, the chase for the almighty dollar has helped them double their contingent at the State wrestling tournament the last two years.

The power of this particular dollar started with someone else’s misfortune.

After qualifying to the State wrestling tournament as a sophomore, Abraham Dirkx was walking around the underbellies of the Wells Fargo Arena, when the unmistakable glimmer of a green rectangle caught his eye. On the ground was a lost dollar bill. Dirkx picked it up and brought it to his coach.

That’s when Eric Nagl, the head coach for the Carroll wrestling team, saw an opportunity. Nagl had Dirkx sign the dollar bill and told him to hide it somewhere in the arena, where only Dirkx would know where it was.

That way when Dirkx returned to the wrestling mat for his junior year, he would have a goal to get back to the State tournament. Not only would the accomplishment speak to his ability to wrestle at a high level, but he would also be able to search for the dollar bill.

“It is high school, and going to the State tournament is an experience by itself. The kids don’t need any more pressure on them, so something like this can help them relax,” Nagl said about why he encouraged Dirkx to hide the dollar. “Yeah, when we go down there, it is business, but it is also a time to enjoy the experience. You get to reap the benefits of your hard work, but you have to have some time to enjoy (the experience of the State tournament). When you’re on the mat, it is a time to punch the clock and get to work, but after that, you have to have fun with your teammates.”

The next season, Dirkx was able to return to the State meet. This time, he brought a teammate, fellow junior Jaxson Kuhlmann.

Before their matches started last February, Kuhlmann and Dirkx went searching for the dollar bill to add another set of signatures to the currency.

Although, as Nagl will admit, there was a bit of uncertainty when Dirkx returned the next year.

As luck would have it, the same luck that brought Dirkx to the dollar may have led him away from the dollar.

“So the funny thing is, Abraham actually lost the dollar from his sophomore year to his junior year,” Nagl said. “We went down there last year and for awhile we couldn’t find the dollar. So Jaxson had to kind of had to help him find it. Eventually they did.”

With the dollar secured, and a new team member knowing the secret location of the dollar, two new signatures were added to the dollar bill and it was hidden again.

Keeping the location, and tradition, a secret

After the 2020 State tournament ended, Kuhlmann and Dirkx left Wells Fargo Arena with revenge on their minds. Neither wrestler advanced as far as he wanted, and they both were left hungry for a return to the grandest of all high school wrestling tournaments.

However, among their teammates, no one knew much about the secret tradition.

“It is kind of weird because Jaxson and Abraham knew about (the hidden dollar) this year; the rest of the kids didn’t really know about it,” Nagl said about the dollar bill. “They knew about (a dollar being hidden), but they didn’t know the whole story.”

The secret stayed with the team for much of the season. Coaches might tell a wrestler to chase the dollar during a meet or practice, but to outsiders it was just a phrase that was thrown around.

Then came the shirts.

Carroll’s wrestling team had even more success (although not as much success as the coaches would have wanted) at the 2021 district wrestling tournament. Kuhlmann and Dirkx returned to the State meet, and they were joined by two teammates, freshman Cael Nelson and junior Carter Drake, at the State meet.

When asked what they wanted to design for a commemorative State wrestling T-shirt, the four wrestlers decided to hide a clue to their secret in the design of their shirt.

The wrestlers and coaches knew what that dollar sign was there for. Outsiders, not so much.

Almost as soon as the orders for the shirts started coming in, so did the questions.

“Really everything blew up because of the shirts, and everyone thought that the shirt design was a misprint,” Nagl said.

So the secret was out. Now several teams know that there is a dollar hidden somewhere in the depths of Wells Fargo Arena (Nagl said one coach even tried to claim the dollar was his, lost at the tournament two years ago), and it might be harder to keep a secret. However, the tradition lives on.

“It is something that is fun for the kids and interesting too,” Nagl explained. “Something that just came to our mind when we had it. We always want to find a way to get down to the State tournament, and I guess kids are intrinsically motivated by money, so, if that what it takes, then we’ll leave a message to our team to go chase that dollar bill down.”

As long as the dollar can be found year after year, then the Tigers will keep adding signatures to it — although having the secret let out does make things more tricky for Carroll’s not-so-secret motivation.

“It is kind of a nice little thing to keep everything together,” Nagl said. “When the tradition gets older, the coaching staff will be able to tell them who the kids were, and what they did for the team. It is kind of nice to have a little secret, although it really isn’t much of a secret anymore. I think everyone is going to be stealing dollars down there for now on.”