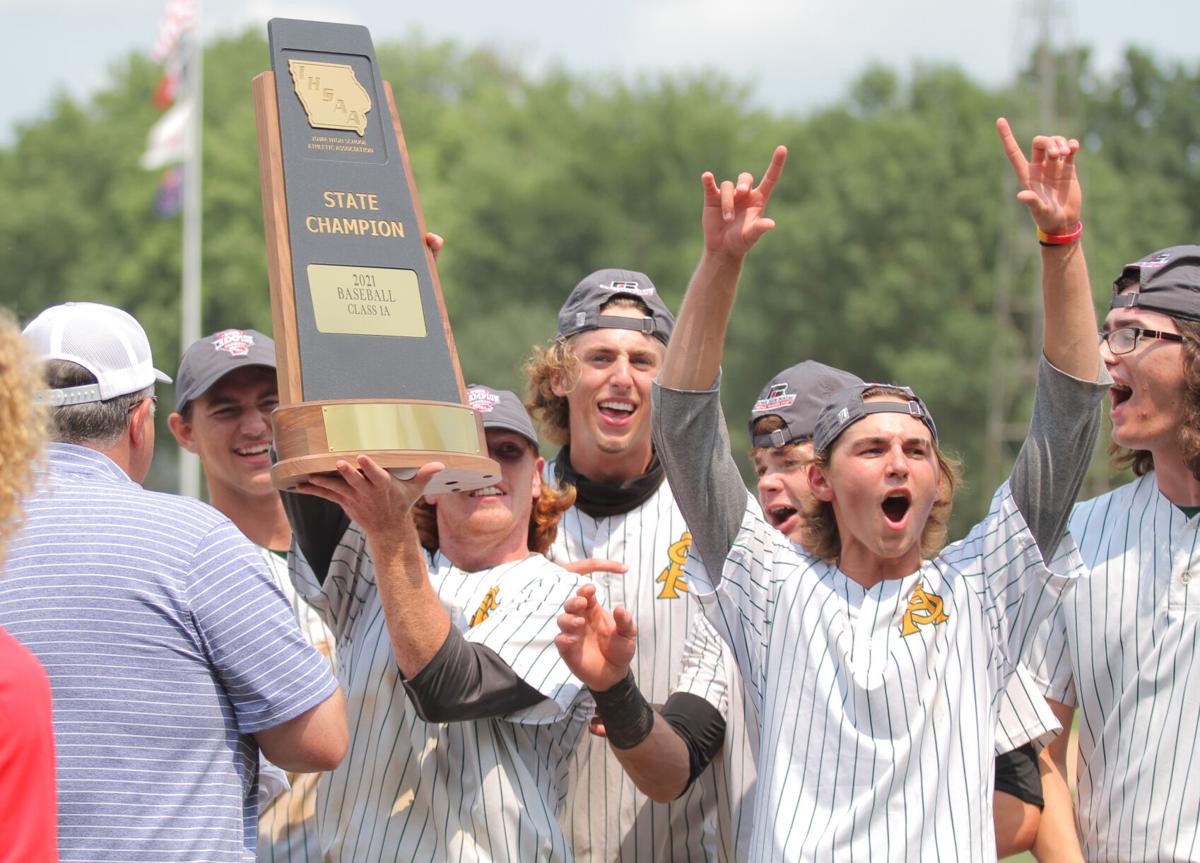 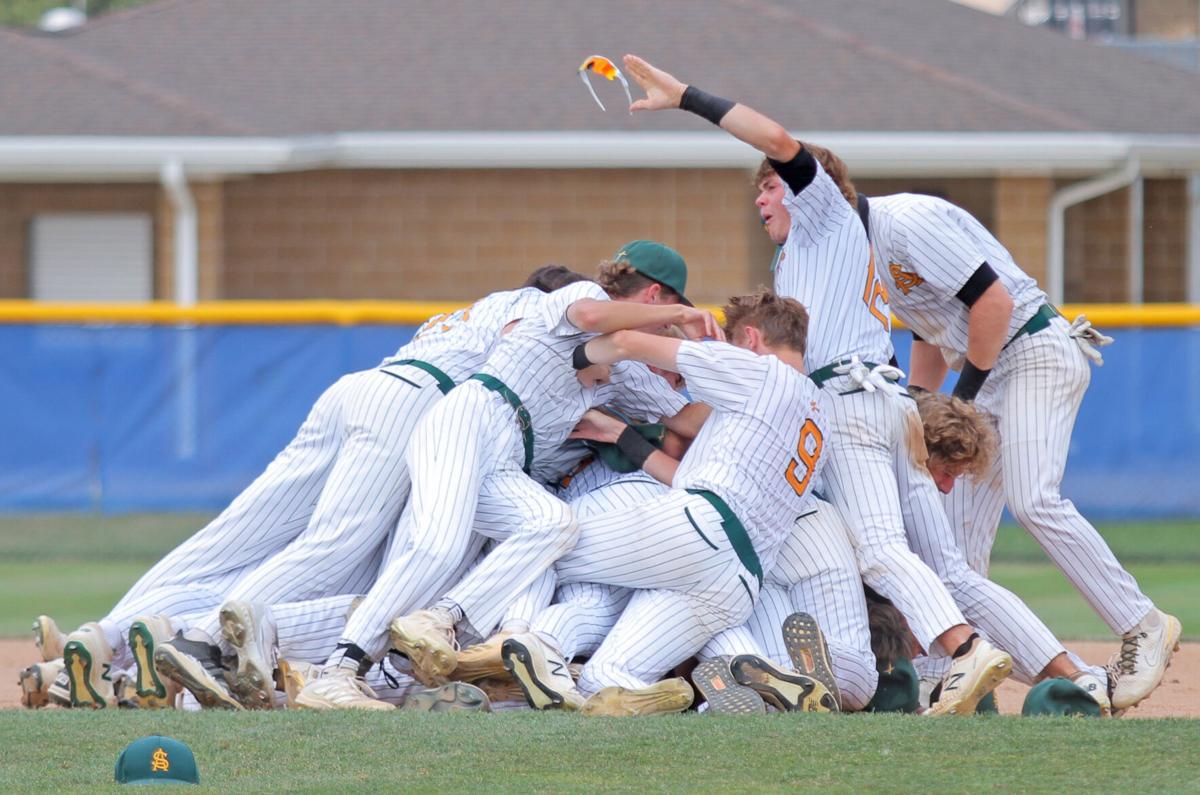 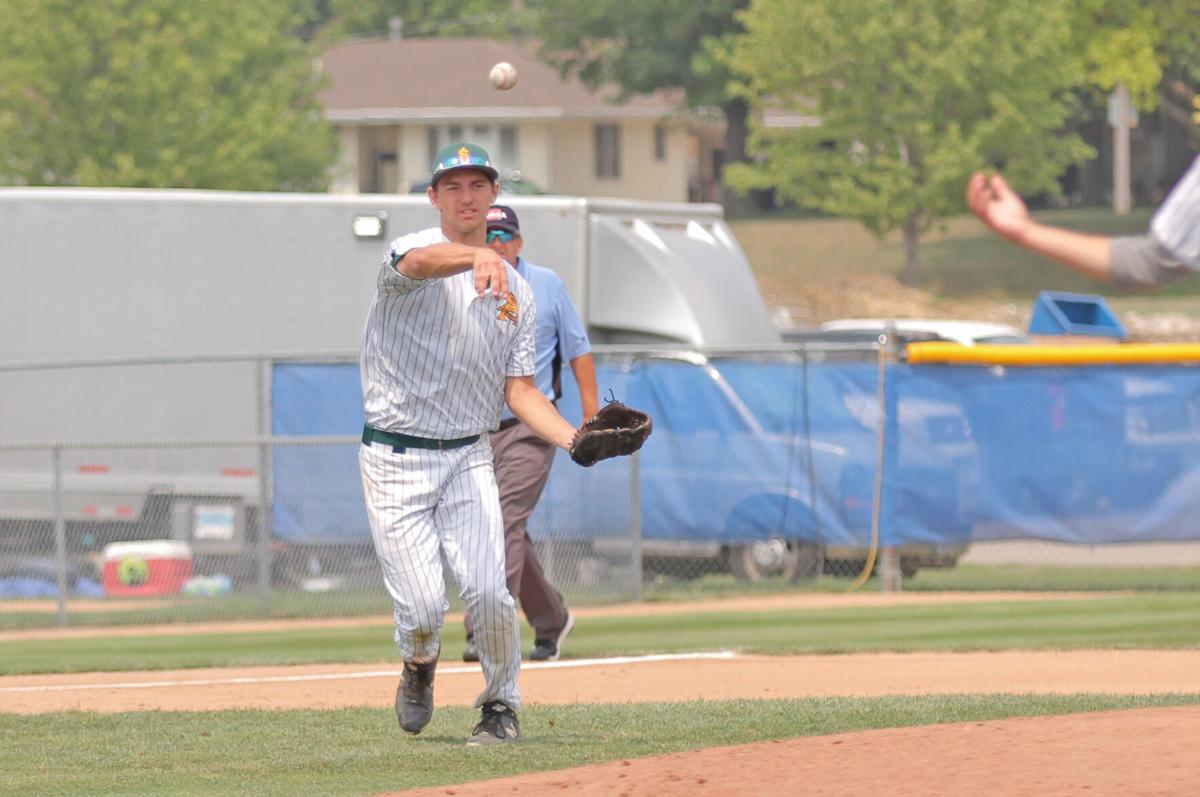 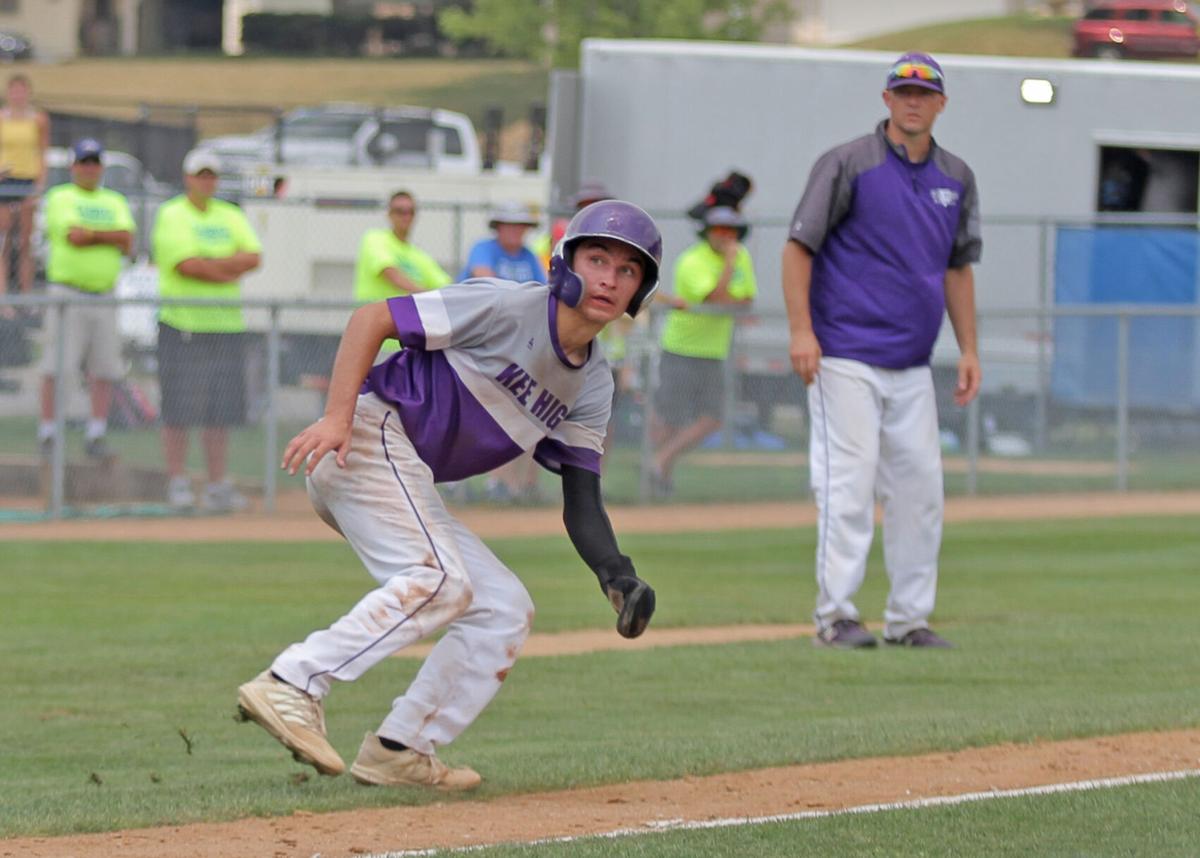 Kee Lansing’s Tyson Cota is caught in a rundown between third and home during the Hawks’ 7-5 loss to St. Albert in the Class 1A state title game July 29 in Carroll. BRANDON HURLEY | TIMES HERALD 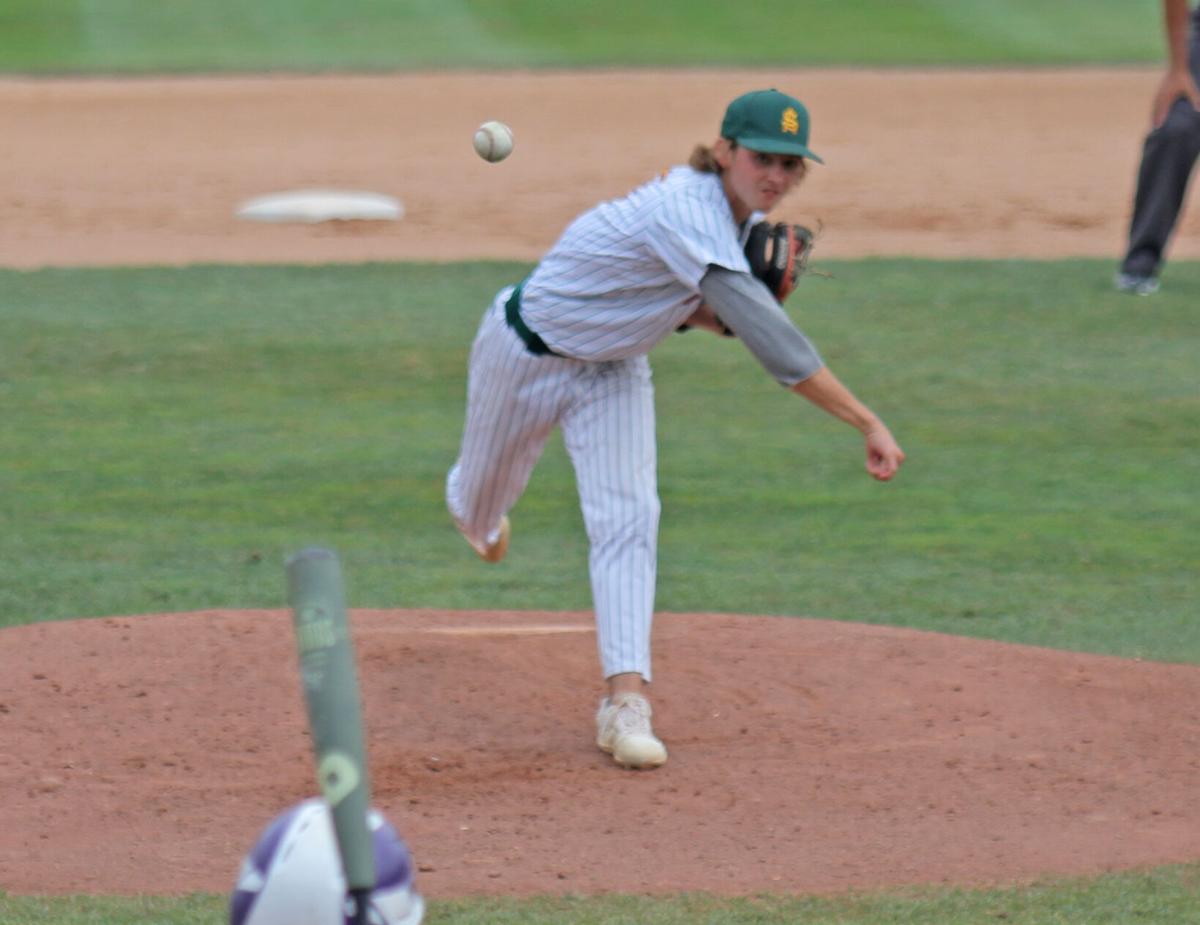 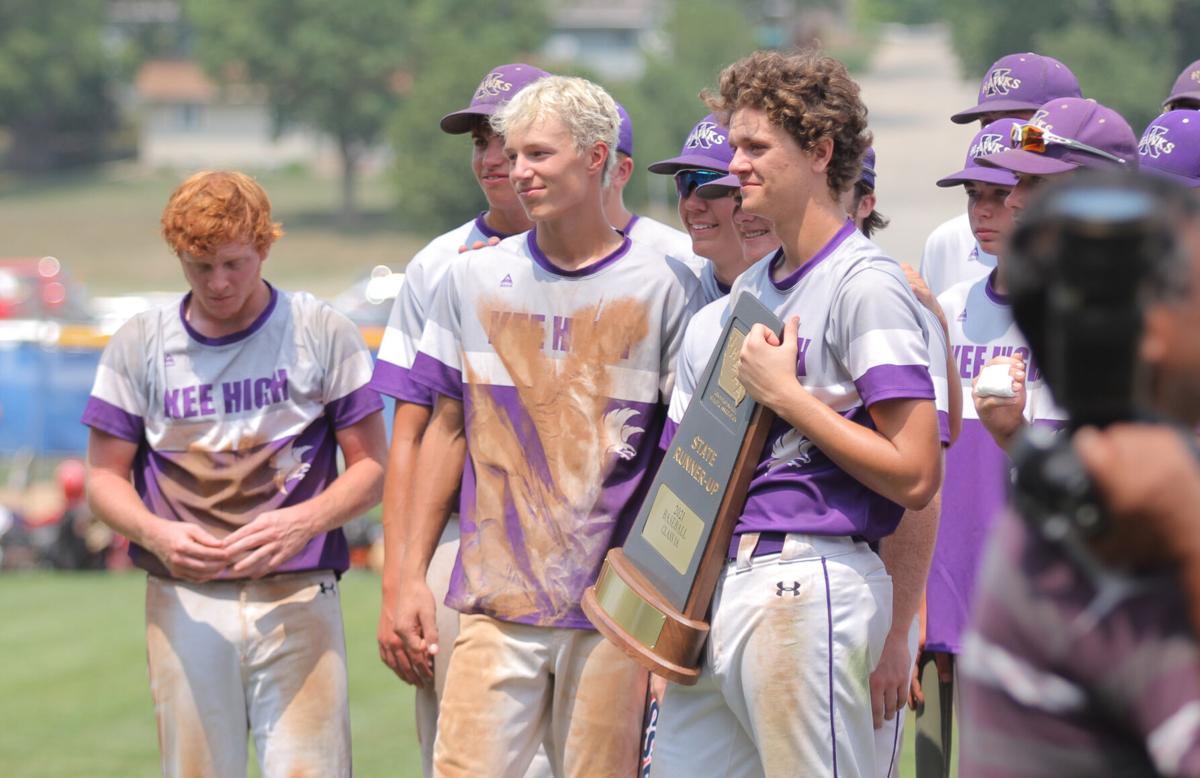 Kee Lansing’s Tyson Cota is caught in a rundown between third and home during the Hawks’ 7-5 loss to St. Albert in the Class 1A state title game July 29 in Carroll. BRANDON HURLEY | TIMES HERALD

The wait was well worth it.

Class 1A’s most dominant team throughout the 2021 state tournament finally received the scare they needed, spring-boarding the program to the title.

More than two decades had elapsed since the Council Bluffs St. Albert last won a championship. It was time to put that drought to bed with effective hitting and a title-clinching grittiness.

The Falcons held on for a 7-5 victory over Kee Lansing Thursday, July 29 in the 1A final, securing the program’s fourth title.

“It’s really surreal,” St. Albert’s Colton Brennan said after the raucous celebration. “We’re really excited and so happy. At the beginning of the year, we knew we could compete. Coming all the way here and winning the state championship, it’s really awesome.”

Carroll’s long-awaited return to championship baseball was in danger of a methodical snooze-fest. State baseball was finally back after a 17 year absence, bringing with it plenty of drama.

Yet another slow start from Kee Lansing proved pivotal as the Kee-Hawks couldn’t claw their way back this time, falling in a 7-1 hole. KHS also trailed at various moments in the quarterfinals and semifinals, but finally ran out of gas on the brightest stage.

This was no ordinary deficit, either. St. Albert far and away was the best team in the Class 1A tournament field, scoring at least seven runs in each of their three contests, out-scoring their opponents by 19.

The 2021 title is the Falcons’ fourth in their history, but first in 22 years (1999). It was a long-time coming for a school which had reached the state tournament three of the last four summers. The beautiful taste of victory was the perfect antidote, dissolving mounting frustration.

St. Albert deserved victory due in large part to their remarkable dominance throughout their stint in Carroll.

The Falcons tallied 13 hits Thursday, continuing an incredible offensive hot streak which witnessed the Falcons average 10.6 hits per contest during the entirety of the state tournament as well as 8.6 runs scored.

Brennan said the offensive success is rooted in repetition. The Falcons never let up throughout the season, honing their skills each week.

“We are working on (hitting) all the time,” the sophomore said. “We were constantly getting better. We know we can piece the ball up really well. We just showed up this afternoon and kept hitting the ball. That’s how you score runs.”

Kee, playing in their 17th state title game, came up short in their bid for a ninth championship. Only Davenport Assumption has won more (11). The Kee-Hawks will have to wait a little longer after running into a juggernaut. KHS last won a championship in 2005.

St. Albert blitzed their way to a six run advantage, scoring two runs in each of the first three innings, then plating another on a wild pitch in the fourth. It seemed as if the Falcons would walk away comfortably with the top prize with yet another blowout, but Kee’s patented resiliency threw a momentary wrench in the impending celebration.

The Hawks scored four runs in the bottom of the sixth inning, pulling within two thanks to a string of St. Albert errors. A pair of wild pitches and a mishandled grounder allowed Kee Lansing to produce their most meaningful damage of the game.

Despite their valiant, sixth-inning onslaught, Kee was held to just four total hits throughout the championship tilt.

As the contest turned to the seventh, St. Albert’s championship mettle shone through. A trusty arm stepped up for the save, preserving the Falcons’ title jaunt.

Cy Patterson, who secured the final out on the bump, was anything but worried once he and his teammates saw a blinding glimpse of victory.

Just three outs stood between them and the trophy. It was time to shine.

“There was a little panic, but we knew we were going to bear down,” the senior said. “We’re a great team and we are a great defensive team. Our sticks always keep us in games.”

Patterson mowed the Kee batters down with relative ease, not allowing a single hit while striking out two, closing the books on the Hawks’ comeback attempt. That pivotal excellence is exactly what Patterson’s teammates expected of him, his firepower shutting the door on a championship victory.

“We knew he’d throw some heat and they wouldn’t be able to touch him,” Brennan said. “We were really confident in his pitching and our fielding. We made some mistakes (Thursday), but we pushed through and got the job done.”

Patterson was one of many offensive stars, collecting two hits and two RBI in two at-bats while Daniel McGrath also drove in a pair of runs. Brennan was three-for-four at the dish with two runs scored. Luke Hubbard secured the victory, tossing fifth and one-third innings, allowing just a single earned run to go with five strikeouts and four hits.

St. Albert secured the championship with a 35-8 record while runner-up Kee Lansing finished the year with 35 wins and nine losses, earning their ninth second-place trophy.