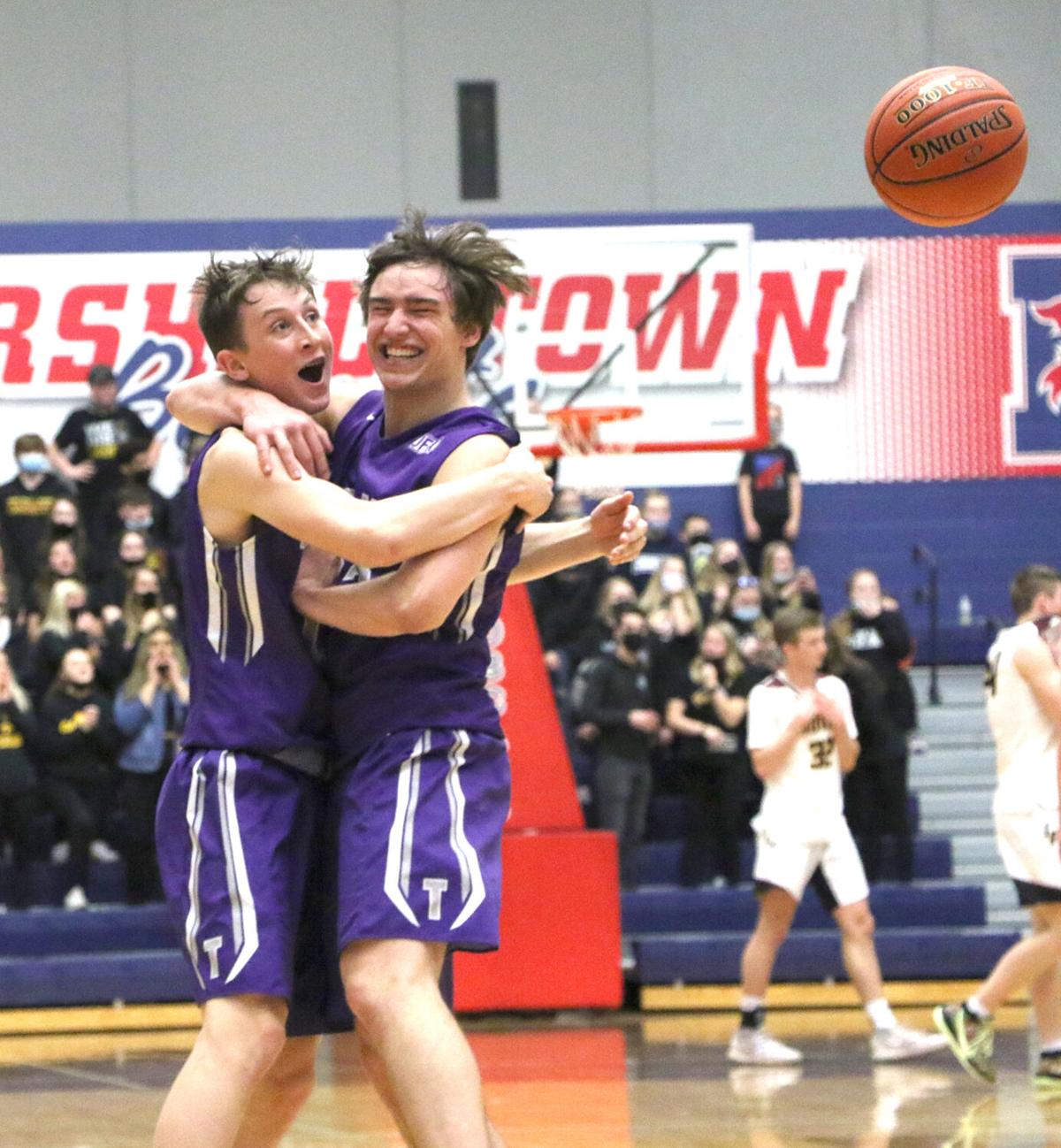 South Central Calhoun sophomore Eli Wheelock hugs senior Brennan Holder as the clock runs out in the Titans' game against Iowa Falls-Alden. Holder's deciding shot in the fourth quarter helped propel the Titans to a 64-56 victory, sending SCC to State for the first time in the district's existence. 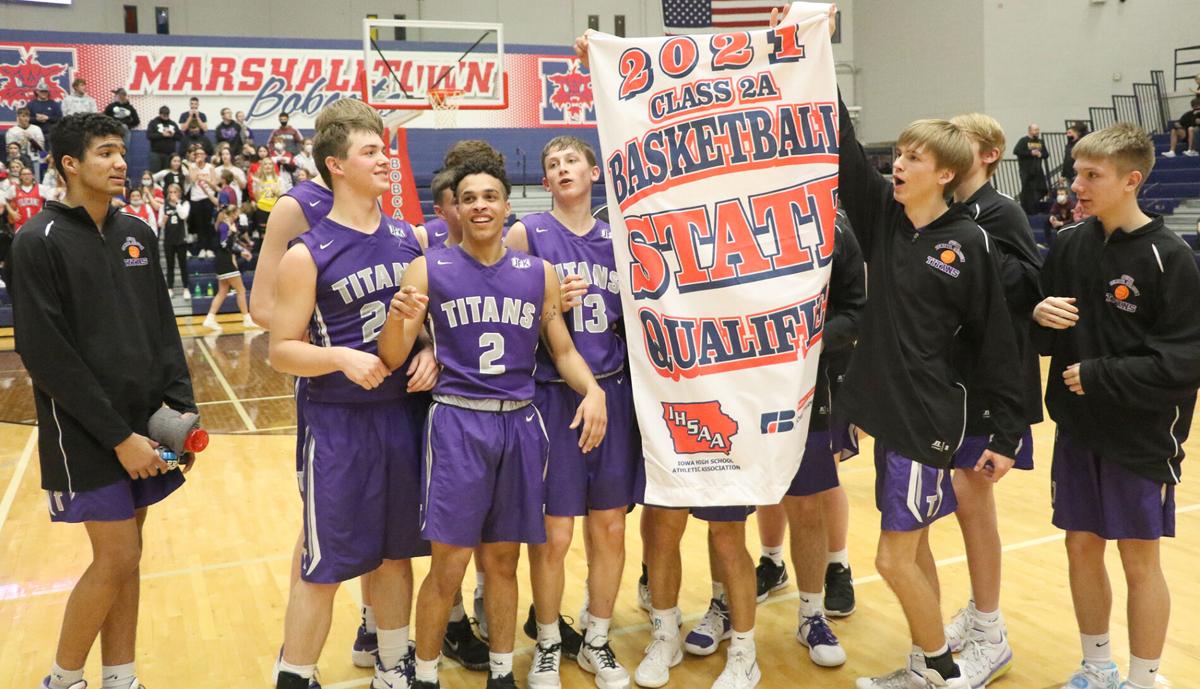 South Central Calhoun’s boys basketball team holds up their class 2A State basketball qualifying banner to their fans after winning a 64-56 game over Iowa Falls-Alden on Feb. 27.

MARSHALLTOWN: When senior Brennan Holder broke the 40-40 tie with a three-pointer early in the fourth quarter, he wasn’t just breaking a tied ball game. He was sending his team on a collision course with history.

Holder’s three would propel South Central Calhoun on an eventual 10-2 run throughout the fourth quarter.

Even with an eight-point advantage, nothing ever seemed to be settled in stone just yet. Iowa Falls-Alden would close the score within three points in the middle part of the fourth quarter, but each time, the Titans had an answer.

Down the stretch, South Central Calhoun players gladly accepted the fouls that IF-A’s defense deployed, desperate to slow down the clock. Each time SCC went to the line, they steadily increased their lead, until the three-point cushion turned into eight, and the final seconds started to tick off the clock.

“I started to get real excited as the final seconds started to click off the clock,” sophomore Eli Wheelock said after the game. “It was a big moment. I saw the clock go to zero and I hugged Brennan (Holder) right away, because we’ve been talking about (getting to the State basketball tournament) all year. It was a big moment.”

Fittingly enough, Holder was the last player to touch the ball, as he took an inbounds pass past the halfcourt line in the final seconds of Saturday’s game. The clock hit zero, and Holder’s team, the South Central Calhoun Titans, held the final advantage 64-56. He tossed the ball to his side and started to celebrate with Wheelock and the rest of his team.

“It was surreal at first, especially at the end, because I could start to feel that we were going to win,” Wheelock said. “I could see the crowd getting into it, and then the horn blew, everything after that is kind of a blur. All I knew is that we had won and were going to State.”

South Central Calhoun’s win provides the Titans with their first-ever State boys basketball tournament appearance. Holder’s shot early in the fourth quarter allowed the Titans to make the tournament for the first time since SCC became a merged school district in the 2011-12 school year. Rockwell City-Lytton had been to the State boys tournament in 2005 and 2006. Southern Cal had one State basketball appearance in 1992.

The seeds for the historic win for SCC were planted in the second quarter when SCC had emerged out of the first quarter trailing by seven. Iowa Falls-Alden hit a few shots, and the Titans needed an answer.

The answer came from Josh Dietrich, Wheelock and Homer Martz.

Wheelock started to answer with a quick three-pointer that trimmed the Cadets’ lead down to five. After a turnover, Martz, a senior for the Titans, swished a second-straight three-pointer. The Titans trailed by just two. A steal led to another Wheelock swish, and SCC took the lead. Just to be sure, the Titans grabbed a loose rebound and let junior Josh Dietrich run the lane for a wide-open layup.

The lead, at least for the moment, belonged to the Titans. So did something else: confidence.

“That run gave us a lot of confidence on both sides of the ball,” Wheelock said. “We were able to hit a couple of shots, and we stopped them on defense. So we were able to feel real good going into halftime after having that run.”

SCC led 32-27 at halftime, but the rush from erasing a seven-point lead in the second quarter was something that sustained the Titans throughout the second half.

“That was a big lead changer for us,” Dietrich said after the game about the second-quarter run. “Iowa Falls-Alden had been hitting their shots throughout the first half. We hadn’t had a lot of people scoring for us at that point, so to get Eli and Homer involved was really big.”

The momentum from the second-quarter lead change seemed to evaporate shortly in the third as Iowa Falls-Alden took an early lead. The Titans were plagued by turnovers to start the third quarter, and although the lead fell into the hands of the Cadets, it was a manageable one.

“We just had to make sure that we were going to slow ourselves down,” Dietrich said about what the Titans needed to do in the third quarter to stop the turnovers. “We needed to make sure not to take any dumb shots and work the ball around the key to get the shots that we needed to take.”

Holder’s shot that set up the win in the fourth quarter was much more than a historic school moment. It also was a testament to how hard the Titans had worked throughout the season, despite rather loud, at times, jeers from onlookers who didn’t think the Titans would be able to make it this far in the season.

“It is big for us to get to State,” Dietrich said. “A lot of people didn’t think we’d make it very far after losing the seniors from last year’s team. We just played our games and did what we had to. We believed in ourselves.”

This year, the belief in themselves helped the Titans win their third-consecutive Twin Lakes Conference title and become the first SCC team to make the State tournament. It also is coming on the heels of a historic football run when the football team was able to make it to the UNI Dome and the State semifinals for the first time in SCC’s history.

“It feels great to get to the State tournament. We started off the season a little slow; we lost the second game of the year, and I think that game made a lot of people put us in the back of their mind,” Wheelock said. “We’ve grown up since then, and now, here we are.”

The Titans are the No. 8 seed in the class 2A State basketball tournament. They will take on No. 1-seeded Boyden-Hull at 6 p.m. on Monday, March 8 at Wells Fargo Arena in Des Moines. Tipoff is slated for 6 p.m.