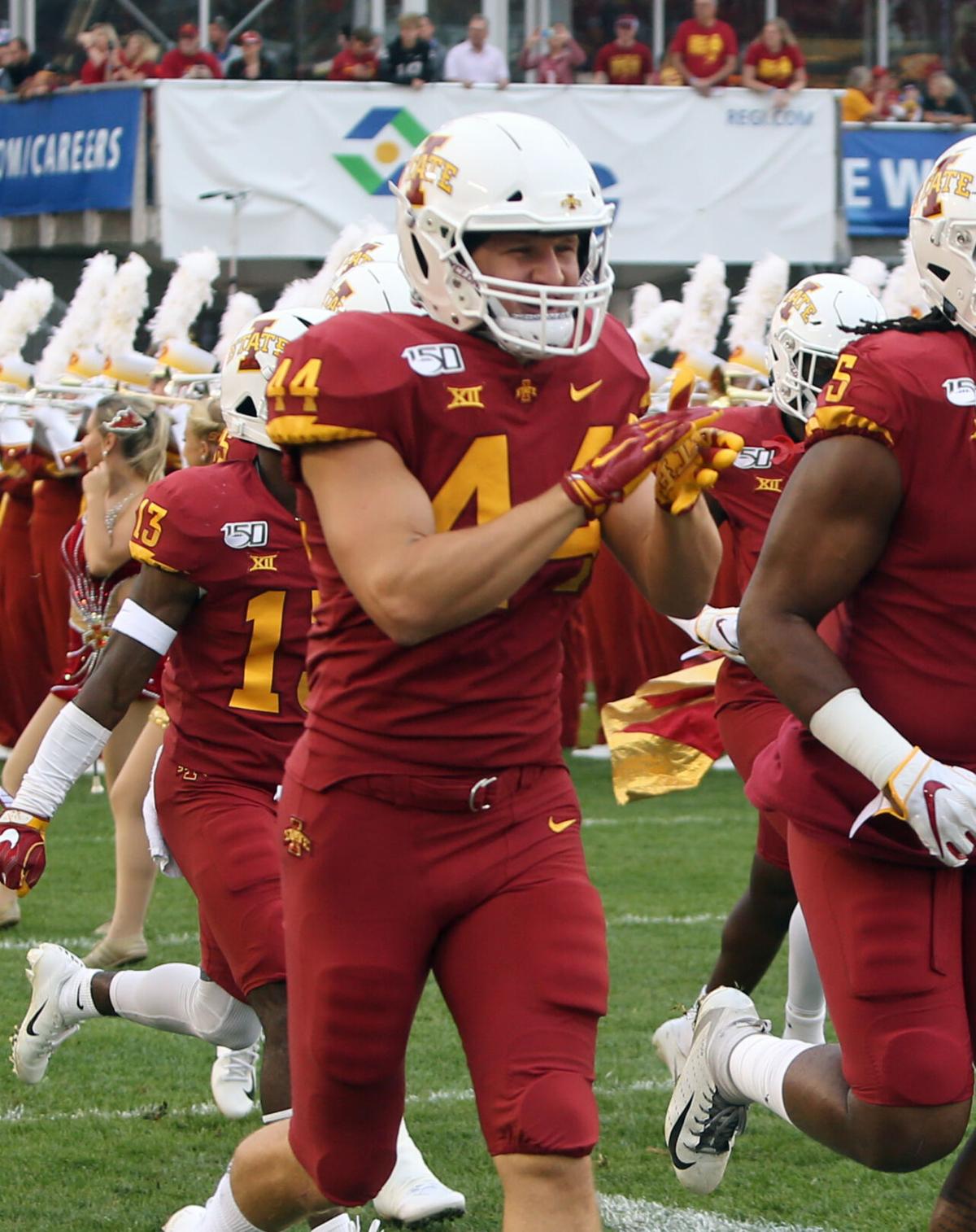 Gage Gunnerson claps his hands together as he trots onto the field of Jack Trice Stadium during a game last season. 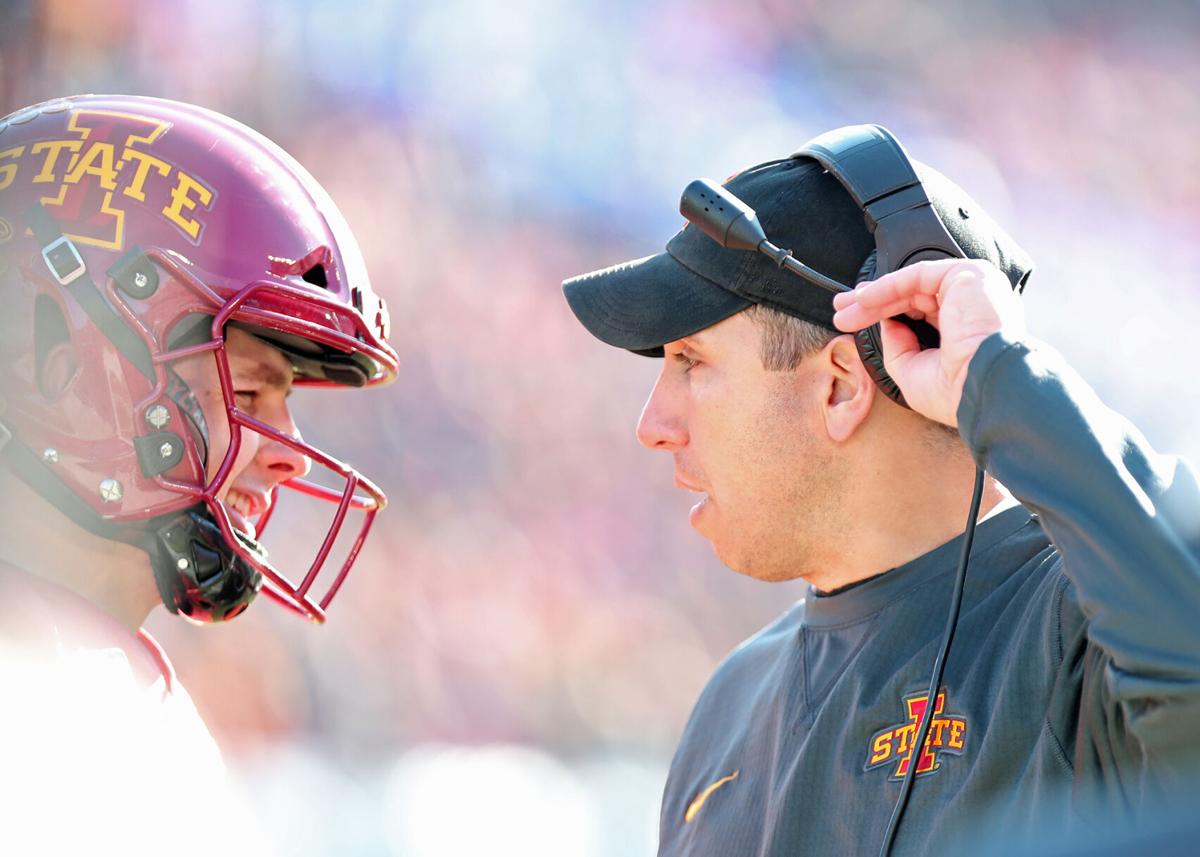 Iowa State head coach Matt Campbell (right) talks to quarterback Brock Purdy (left) during a break in the action during a game played last fall at Jack Trice Stadium. Gage Gunnerson said Campbell is a big influence on his life.

Gage Gunnerson claps his hands together as he trots onto the field of Jack Trice Stadium during a game last season.

Iowa State head coach Matt Campbell (right) talks to quarterback Brock Purdy (left) during a break in the action during a game played last fall at Jack Trice Stadium. Gage Gunnerson said Campbell is a big influence on his life.

He was one of the first to put on the uniforms, but his first expectation was never to wear the uniform on the field.

Until one day the coaches started to keep an extra eye on him wearing the cardinal and gold. Not only did the coaches like what they saw in terms of the uniform combination, but they also saw potential in the player wearing the uniform.

From 2018-2019, Gage Gunnerson had one of the more unique experiences as a part of the Iowa State football program. Not only did he go from an equipment staff standout to player, but he also learned more than a few life lessons along the way.

It all started in early 2018 when Gunnerson was able to join the equipment staff of Iowa State after the 2017 football season. Gunnerson spent the 2018 season learning the ins and outs of the equipment staff. That required the former high school quarterback to stay in shape, and actually star in a few equipment staff intrasquad practices that were held during 2018.

Being a part of the equipment staff Gunnerson was able to develop a bond with some of the players, and eventually some of the coaching staff as well.

Some of his first moments with the coaching staff of Iowa State came on Sunday’s via a few one-on-one visits.

Back in 2018 the Cyclones were breaking in new uniform combinations. Before each new combination would debut the coaches wanted to see a live demonstration of what the uniform might look like on the field.

“Visualizing the uniform on a player is one thing, but seeing the uniform especially if it is a new combination is hard unless you actually see the uniform on someone,” Gunnerson said. “The equipment guys looked at me and were like, ‘well you’re the closest guy in the equipment room to a football player, so we are going to dress you up.”

At first Gunnerson wasn’t sure about being the uniform guinea pig, but his fandom of the Cyclones helped cement the idea in his head.

“I was hesitant to the idea at first, but putting on the game work cardinal and gold uniforms is an opportunity that I wouldn’t pass up being a life-long Iowa State fan,” Gunnerson said.

On Sundays Gunnerson demonstrated the uniforms to the coaches. During one such visit to the Iowa State coaching staff, Gunnerson was asked to stay a little longer after the meeting.

“One day I went to show the coaches and they had some comments about me filling out the uniform pretty well, and I joked with them and that was that,” Gunnerson said.

Since Gunnerson was already with the football team, during his free time he was busy getting back in football shape. He already had caught the eye of some of the coaches, but Gunnerson asked one of the players if his dreams were a little too far out.

“One day after I was finished with my workout after practice was held, I had a conversation with Ray Lima. He is one of those people that you talk with them and you know you can be 100 percent open without having a deep connection. I asked Ray, ‘am I crazy for thinking I could be on the field with you guys?’” Gunnerson remembers, asking Lima in a serious manner. Gunnerson didn’t have expectations of being the next superstar for the Cyclones, but he knew he could be a do-anything player.

“Ray told me that he continuously saw how I watched practice and that he noticed I had this look on my face, that told everyone I wanted to be on the field. He told me, ‘what was there to lose?’ He also said that the only person holding me back was myself. He hit the nail on the head and after that conversation I really started trying to gain weight to fit the frame of a D1 football player.”

After being told that he looked the part of a football player, Gunnerson knew that if he didn’t take a shot now then he would always have questions about what could have happened.

During practices Gunnerson talked to several coaches about what it would take for a player like him to make the team.

Gunnerson’s reputation of working hard throughout the 2018 season had become widely known throughout the Iowa State football complex. On top of that he had more than one strong showing at the equipment squad football games.

Gunnerson can’t trace back who he first talked to, but he remembers talking to Derek Hoodjer, who was the director of player personnel and Colby Kratch, who helped coach the linebackers, about what he would need to do to have a chance to try out to be a member of the Cyclones.

After the 2018 season was over Gunnerson had some paperwork to fill out. The coaches had looked him over and had asked him to be a member of the Cyclones.

“I thought to myself how unusual my circumstance was, but I figured if there was a coaching staff in the nation that would give a guy like me a shot it was Coach Campbell’s staff,” Gunnerson said.

After being invited to be a part of the ISU football team Gunnerson knew he was in line for a lot of work.

First there was the fact that he had to make up for nearly two years away from the sport. Next he had a new playbook and position to learn.

“I knew I was going to have to go to work,” Gunnerson remembers about what his reaction was when he was able to join the football side of the ISU football team. “I went from folding clothes to watching hours of film, pushing sleds and learning run schemes.

“I loved it, I was back in the sport I love. The start was overwhelming because I quickly learned that my football IQ was nowhere near where it needed to be. I felt comfortable in the weight room due to the instruction that I received from one of my high school coaches, Ryan Steinkamp.”

Gunnerson, who played quarterback and linebacker in high school became a tight end for the Cyclones, and he admits that it took several months for him to become comfortable with his new assignment.

He still vividly remembers getting ready to take the field for the first time as a player.

“Taking the field for the first time as a player is something I’ll never forget,” Gunnerson said, even months after taking the field with crystal clear memory. “I remember not being able to see anything through the fog machine and having to touch the person in front of me to guide me. Then getting through the fog and running out to the screaming fans, I had the biggest smile on my face and the adrenaline was flying through my body. I’ve spent countless Saturdays at Jack Trice, but to run out on that field all hyped up for a game was pretty amazing.”

Gunnerson was able to spend the entire 2019 season with the Cyclones, but he never was credited with playing a down of college football, still the experiences of being on the team will last.

Not only does Gunnerson share a bond with the other players of the 2019 season, he shares a unique bond with his brother, Blaise.

Both Blaise and Gage were a part of division 1 football teams. Blaise joined the University of Nebraska team in the spring semester of 2020.

“I had to jab at Blaise, telling him I was on a D1 football roster before he was, be we both knew that our paths were a little different,” Gage said, noting that Blaise was highly recruited, and earned a scholarship at Nebraska. “I can’t give Blaise enough credit — there isn’t a shortcut on the path he is on right now. He busts his butt every day and is willing to sacrifice a lot to things that people his age aren’t willing to. I’m confident he is going to preform well in Lincoln and be a key leader in that locker room. I’m pumped to go to Lincoln and watch him do his thing on the field.”

Gage knows that his brother was being recruited by ISU as well as Nebraska, but he always tried to keep his hands off in the recruiting process.

“You would think that I was heavy on him to be a Cyclone,” Gage said about the talks he had with his brother. “As a brother I wanted him to go somewhere that he is excited about. If he ever asked for advice I’d give my two cents, but I didn’t try to make him come to Ames because I feel like there was enough ‘pressure’ on him from people surrounding him who were trying to bring him to Ames.”

This fall Gage is back at Iowa State, but he isn’t on the football team. Instead he is wrapping up his undergraduate degree in finance while also working on his minor in supply chain management.

Although he isn’t on the football team anymore, he is very thankful for the experience on being on the team. He said what he learned will help him in the future.

Eventually Gunnerson wants to become a football coach, and being able to see, and experience, how Iowa State and coach Campbell ran their program is something he’ll take with him forever.

“I learned a lot about football, but the influence of (head coach Matt Campbell) on my life is enormous. You get the same person every day and the constant drive and obsession for what he loves is something I look up to greatly. He continuously pushes the envelope and encourages everyone to look inward on your daily habits to how you sleep, eat and govern yourself.

“He is so intelligent and has tons of life experiences to pull from. He is one of those people that you listen to every word when they are talking and he makes you feel every word when he talks to you.”

Gunnerson also mentioned that Campbell reminds his players that one day there will be a last game, but the lessons from the locker room and a football team will be something that stays around forever.

“Being able to be inside the doors of the football facility for two years and have those coaches as influences in my life taught me more about myself as a person than any other experience in my life,” Gunnerson said.