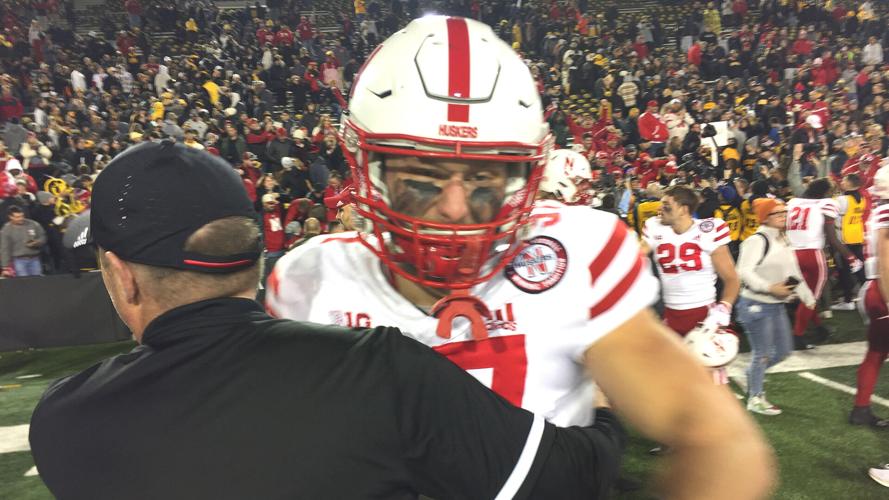 Nebraska edge linebacker Blaise Gunnerson celebrates with a defensive coach after Nebraska earned a 24-17 victory over Iowa at Kinnick Stadium on Nov. 25. Gunnerson was able to finish the game with one tackle. 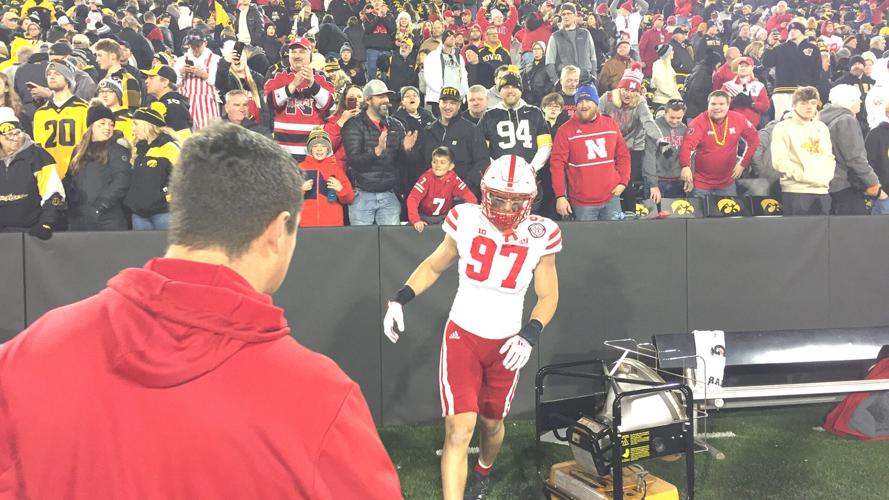 Kuemper Catholic graduate Blaise Gunnerson (97) walks away after celebrating with fans a 24-17 victory over Iowa in the last game of the regular season for Nebraska. Gunnerson finished this year with five tackles.

Nebraska edge linebacker Blaise Gunnerson celebrates with a defensive coach after Nebraska earned a 24-17 victory over Iowa at Kinnick Stadium on Nov. 25. Gunnerson was able to finish the game with one tackle.

Kuemper Catholic graduate Blaise Gunnerson (97) walks away after celebrating with fans a 24-17 victory over Iowa in the last game of the regular season for Nebraska. Gunnerson finished this year with five tackles.

By some accounts the season had been a struggle. The Huskers entered their 12th game of the season, against Iowa, knowing that it was going to be their last.

That didn’t stop the Huskers from proving what they were made of.

On the sidelines watching the final seconds of the game tick away was Kuemper Catholic grad, and Nebraska redshirt freshman, Blaise Gunnerson. As soon as Nebraska kneeled for the final time and the final seconds ran off the clock, the No. 97 jersey of Gunnerson was one of the first Nebraska players to rush out on the field with both hands extended over his head.

That was just the start of a celebration that seemed to be building for most of the year.

The win wasn’t just a victory over a rival for the first time in seven years. It wasn’t just the satisfaction of knocking their opponents out of a Big 10 west division title.

In some ways the victory seemed to be the start of something new, despite a season of frustration and adversity that they had just faced.

“It was really cool to see all the time click off the clock,” said Gunnerson about watching his teammates seal the win. “Obviously we had been waiting for this win for awhile. I can’t explain how much it means to this team. Tip my hat off to Iowa they’re a great team and they’ve handled us for a little bit now.

“We had a great game plan a great week of practice leading up to this game. Tonight I thought that special teams played really well. The defense really stepped up when we needed to. It feel great to be able to be a part of this win. To see these guys, the seniors go out on a positive note is great. They deserve it”

Adversity seemed to strike the Huskers team early and often this season. They started their season off in Ireland with a narrow defeat against Northwestern. They then beat North Dakota, but fell in their next two games to Georgia Southern and an Oklahoma team that was ranked No. 6 in the nation at the time.

After the defeat against Georgia Southern Nebraska was rocked by news that their head coach since 2018, Scott Frost, was being fired by the University.

The firing of a coach is the type of adversity that could turn some people away from a program, but for Gunnerson, and a lot of the Nebraska players, adversity has been something they have repeatedly bounced back from.

The Huskers started off October with back-to-back wins, beating Indiana and Rutgers, but fell  in their next five games before ending the season with a win in Iowa City.

“A lot of adversity in the season,” Gunnerson said about the season. “The biggest thing for us is that we have a tight-knit group of guys in the locker room. We have busted our butts each and every day to get better. We knew that the wins and losses were going to come, but we are going to continue to work harder in the future to build on more wins.”

When Gunnerson was a junior in high school he had to miss most of the football season for an injury. Despite missing that time, Gunnerson was able to bounce back for a strong senior campaign and he was able to earn a scholarship to play on a Nebraska defense that has been known, for decades, as one of the toughest in the nation.

At the end of the year Gunnerson was named as the Nebraska Defensive Scout Team Player of the Year.

Through a year of uncertainty from week to week Gunnerson has been impressed with the teams ability to stay together and continue to play for each other.

“I was really impressed with our ability to stay together as a team,” Gunnerson said. “Hats off to the leadership on the team. They did such a great job as a team to keep everyone together and keep everyone fighting. I think it really says something about our character to come out and win this game the way we did tonight.”

The way that the Nebraska defense, through Gunnerson’s eyes, was able to stay together was because of the coaches and also the leaders on the team.

“Everything started with our coordinator Billy Busch,” Gunnerson said. “He has a great attitude headed into the workplace every day. Also our leadership on the d-line and the entire defense has been out of this world. We have all sorts of guys that lead us. Every position group has the core leaders and it just stems from the leaders that we have put in place.”

Gunnerson explained that it was the leadership of the team that worked to keep the defense together. There wasn’t any finger pointing or anything else on the team through a tough season.

“Really the highlights for me have been the day in and day out with this group of people,” Gunnerson said. “The 7 a.m. meetings I couldn’t wait to wake up and go to those. The coaches just had an ability to fire us up and get us ready to go each day. We were always able to bring it.

“It was a long season and we had a lot of losses, unfortunately, and it wears on people. That type of season is never easy on anyone. It was the people that showed up to the meeting room with a positive attitude and got us ready to attack the day that really made us keep going. Those are the people that I appreciate and the moments that I’m going to remember.”

Playing with a positive group of people makes the win at the end of the season over Iowa a little more sweeter.

“It means a ton to go into the offseason on a positive note,” Gunnerson said. “I couldn’t be more appreciative of the way that this defense has worked throughout the season.”

Things seemed to get a little more bright after the win over Iowa too. Nebraska hired former Carolina Panther head coach Matt Rhule as their next head coach.