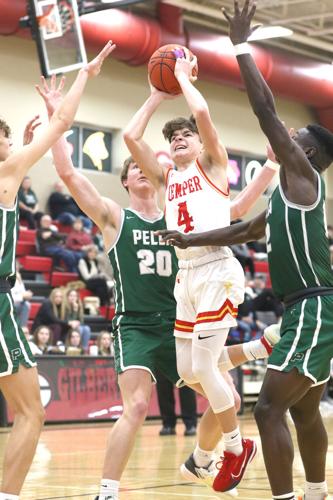 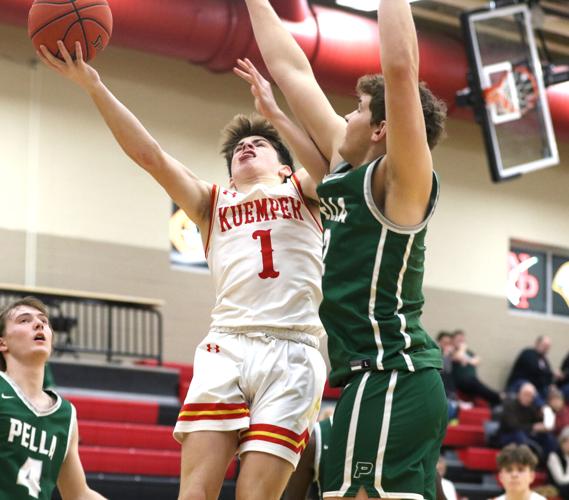 Kuemper Catholic’s Michael Kasperbauer (1) goes up for a layup against the defense of Pella’s Luke Keitges (right during a play in the first half of the game played Jan. 21 in Gilbert. Kuemper battled throughout the game, but Pella gained a 58-55 win.

A little extra power almost gave them a weekend sweep and a little something to build the rest of the season off of.

Saturday afternoon the No. 7 ranked Kuemper Catholic boys basketball team came within centimeters of having a near-perfect weekend.

The Knights played Pella in Gilbert’s annual Basketball showcase. The Knights battled until the final second, but came up just a little short, 58-55.

“The guys really showed up ready to compete against a solid 3A team today,” Sean Minnehan, the head coach of the Kuemper Catholic boys basketball team said. “Pella may not be having the season that they want to have, but they are in a tough conference, similar to us.”

The Knights seemed to start the game off with plenty of fire power despite playing in a game less than 24 hours before their contest with Pella.

Late in the game however Pella had been able to take a modest lead.

Badding started off the fourth quarter with a three pointer that gave the Knights a one point lead, but Pella answered and built a lead as much as five with five minutes to go.

Kuemper and the Knights answered back and tied the game at 53 following a three by Michael Kasperbauer.

The Dutch battled back and were able to regain their five point advantage with under a minute to go.

The deficit just seemed to  inspire the Knights. The Knights were able to get a steal and a layup to trim the lead to three points.

After a Pella turnover the Knights were able to get the ball back and set up a play for the chance at a tie.

On the first play the Knights tried to get the ball into the key to draw a foul, but the ball was knocked out of bounds by Pella.

The second try they went straight for the kills shot, as they put the ball in the person who had given the Knights a strong start.

On the inbounds play, three of the Knights created a distraction by drawing the defenders into the key. Meanwhile Badding retreated to the three point line where he was most comfortable.

The Pella defense lost track of Badding as he received the ball and then fired up a shot with less than 10 seconds on the clock. Although the shot had enough height the distance wasn’t enough as it rolled off the bottom of the rim. A Kuemper and a Pella player battled for the ball, but it rolled off their hands and out of bounds.

At first the ref closest to the play ruled that Pella had touched the ball last, but after a short conference the refs overturned that decision and gave the ball to Pella.

The Dutch were able to hold onto the ball for the final second and secure a hard-fought win over the Knights.

“Both teams were missing a big part of their team,” Minnehan said. “From that standpoint it was great to see both teams try and figure out their offense without that piece. Ultimately we just have to get better at rebounding and giving up second-chance opportunities to our opponents. Defensively I thought we played really well.”

Neither team ever had a lead of more than seven points as Pella was able to grab a two-point lead just before halftime. They maintained that lead until the start of the fourth quarter when Badding was able to give the Knights a slight lead.

“We need to find ways to keep Brock going, because he started out the Friday night game with two big shots too,” Minnehan said. “Badding is a great player for us, we just need to find a way to keep him going, and get him the ball with more space late in the game.”

The strong competition against Pella is just a glimpse into what the Knights are capable of, especially as they head into the final part of the season with another large school, Lewis Central lingering on their schedule.

“We have another big game coming up next week with Lewis Central,” Minnehan said. “Since last Friday we’ve played six games and that is a lot. We’re going to keep showing up and get ready for the games. We have some rest with only one game coming up this week so that should help.”

Saturday the Knights were led by Dawson Gifford who had 13 points. Michael Kasperbauer had 12 points. Carson Kanne added eight points along with Carter Putney.

Badding finished with six points. Taye Vonnahme had four points. Ben Gerken and Evan Adams both had two points each.

Friday night the Knights were able to gain a dominant win over Creston on the road.

In an 88-66 victory the Knights never trailed, especially after an offensive showcase that they put on in the first half.

The long road trip didn’t affect the Knights at all as they scored 54 total points in the first 16 minutes.

Creston had plenty of offense too, but the Knights led 54-35 at halftime. Both teams had similar points in the second half, but Kuemper’s lead was too much as they were able to gain the victory.

Michael Kasperbauer and Dawson Gifford both finished with 20 points in the win over Creston. Ben Gerken and Carson Kanne both had 10 points each.

Tyler Stoelk and Carter Putney both finished with two points each.

The Knights stand at 13-4 overall on the season.