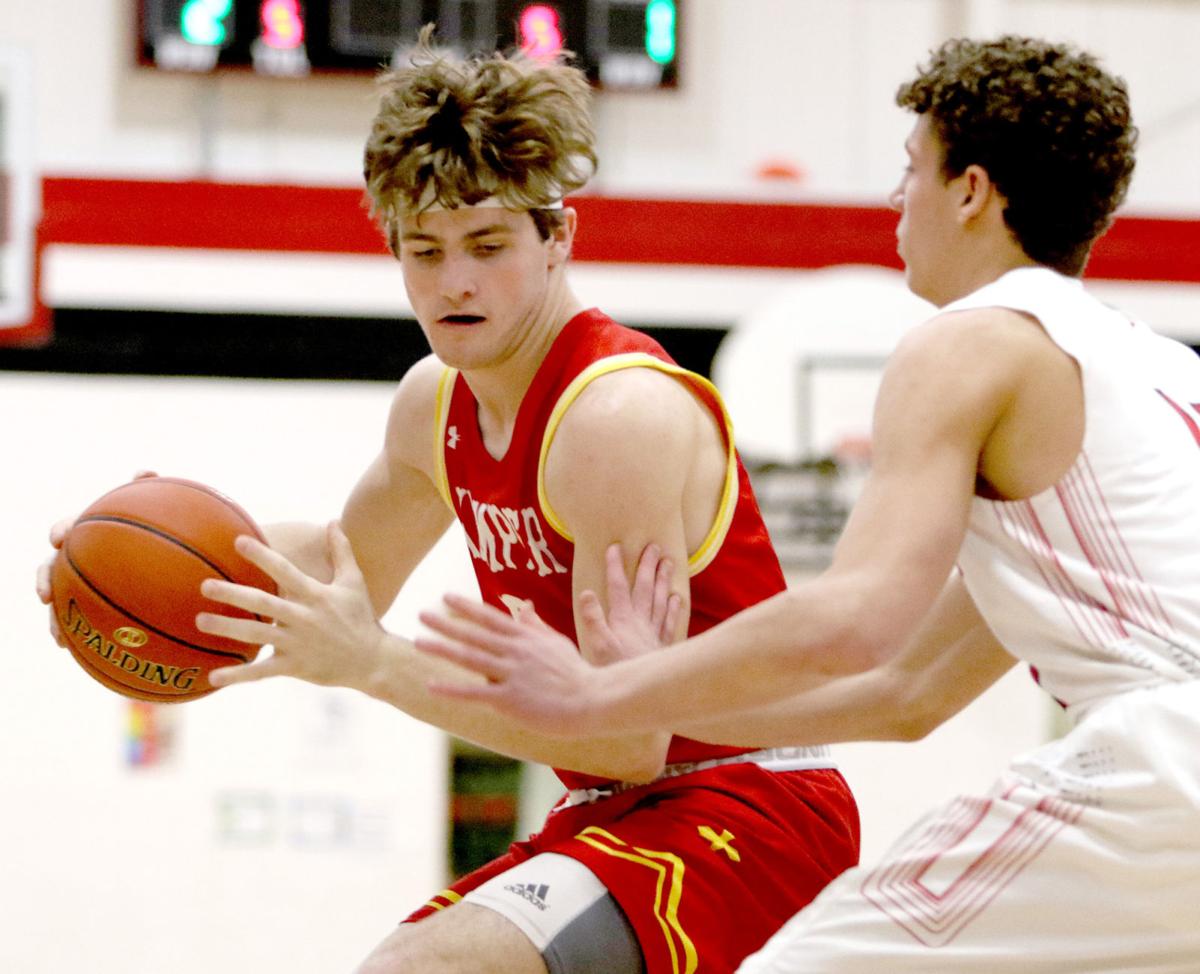 Kuemper Catholic’s Kyle Berg picks up his dribble as he prepares to take a shot during the first half of a Jan. 11 game played against East Sac County. Berg scored 16 points, including the final two points in a 57-55 victory over East Sac County. 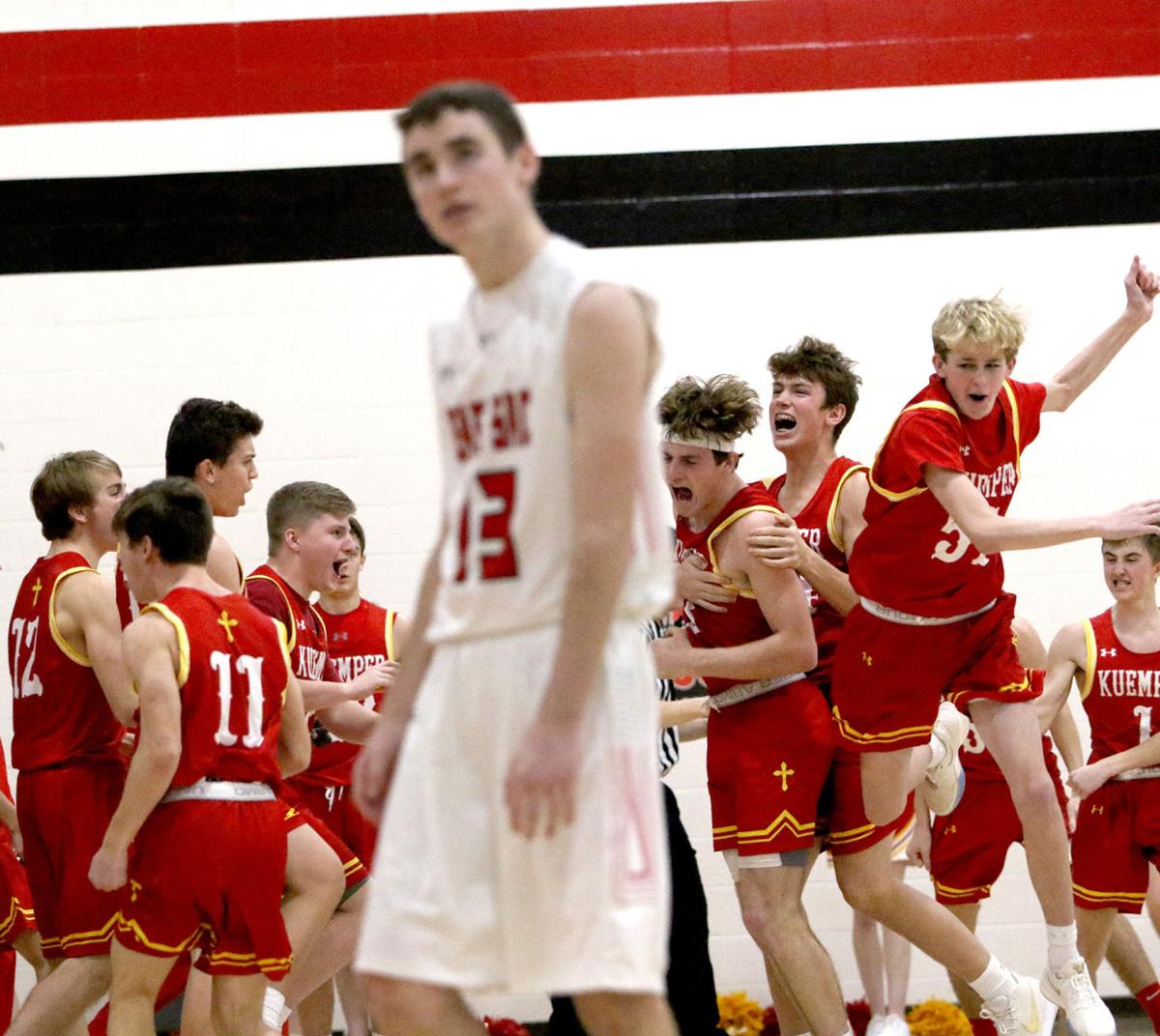 East Sac’s Griff O’Neill (13) looks up at the scoreboard as Kuemper Catholic team members celebrate a 57-55 victory in the background after a Jan. 11 game played in Sac City.

Kuemper Catholic’s Kyle Berg picks up his dribble as he prepares to take a shot during the first half of a Jan. 11 game played against East Sac County. Berg scored 16 points, including the final two points in a 57-55 victory over East Sac County.

East Sac’s Griff O’Neill (13) looks up at the scoreboard as Kuemper Catholic team members celebrate a 57-55 victory in the background after a Jan. 11 game played in Sac City.

SAC CITY: Big plays have a habit of finding big players to attach themselves to.

Recently, for Kuemper Catholic the big plays have been attached to senior Kyle Berg in the big moments. Saturday night, in a 57-55 victory over East Sac County, Berg had the big play, and once again found himself on the free throw line with the game on the line.

“Kyle was in the same situation last week in a tight ball game against St. Albert,” said Sean Minnehan, the head coach for Kuemper Catholic’s boys basketball team. “He was at the free throw line with under a minute to go, in a one point ball game. He came up empty that night. This time he gets the free throw shots with nine seconds left in a tie game. He makes them both. Its all about confidence between the ears.”

Late in Saturday’s contest on the road against then-ranked No. 9 East Sac County, the Raiders and Knights were locked at 55.

Kuemper had climbed back from a 49-45 deficit at the start of the fourth quarter. The Knights chipped away at the lead, until tying the game up at 55 late.

As if driven by a force, or more likely, the strategy of the Knights, senior Berg, ended up with the ball with under 15 seconds left in the game. He first tried to find an outlier pass to dish the ball to, failing to see anyone open, Berg charged to the hoop. He was forced to take a step back jumper from just outside the right side of the key. As he took the shot his arm was bumped, and he was fouled.

Although the shot fell off the front of the rim, Berg was rewarded two free throw shots.

Unlike last Friday, when Berg had a free throw be ruled out of bounds before his shot counted, Berg’s first shot went effortlessly through the rim.

The next shot was just as smooth, and the Knights had a two point advantage with a mere nine seconds remaining on the clock.

“I had been practicing free throws all season basically,” Berg said. “I knew I had to go up to the line and stay confident. I had to stay myself. I knew I could knock down free throws when I needed to. I just had to keep in my head. In the St. Albert game I got rattled a little bit. So tonight I just wanted to stay calm and confident.”

Berg’s shots gave the Knights a two point advantage, but the Raiders, who were ranked No. 9 in class 2A by the AP at the time of the game, were a tough team to hold down, especially on their home floor.

Recent history in the rivalry series was also working against the Knights. The last two seasons East Sac had won the rivalry game, and it seemed that they would have one more shot to either tie, or take the win outright.

On the next possession East Sac quickly moved down the floor. They tried to get the ball to one of their best shooters, Camden Schroeder. However the Kuemper defense arose to the occasion and tipped the ball, gaining possession, and celebrating in the final few seconds with the second win of the basketball season for the Knights.

Recruiting Ticker, Jan. 21: Another busy junior day ahead for Huskers

“Snowball effect. We were caught in the negative where we had a miss shot or a miss rebound or a play didn’t work like we wanted it to. From there things just got harder and harder for us,” Minnehan diagnosed what had been working against the Knights all season long. “What I told the guys was, lets get the snowball rolling in the other direction. We knew we were going to get the best shot from East Sac, and we had to give it right back to them. Luckily we were able to do that tonight. We just need to keep the momentum going.”

It was a tough week for the Raiders. They played three games and in all three came up short by a combined six points.

Berg led the Knights with 16 points. With 10 points was Cole Collison.

Schroeder finished with 15 points to lead the Raiders.