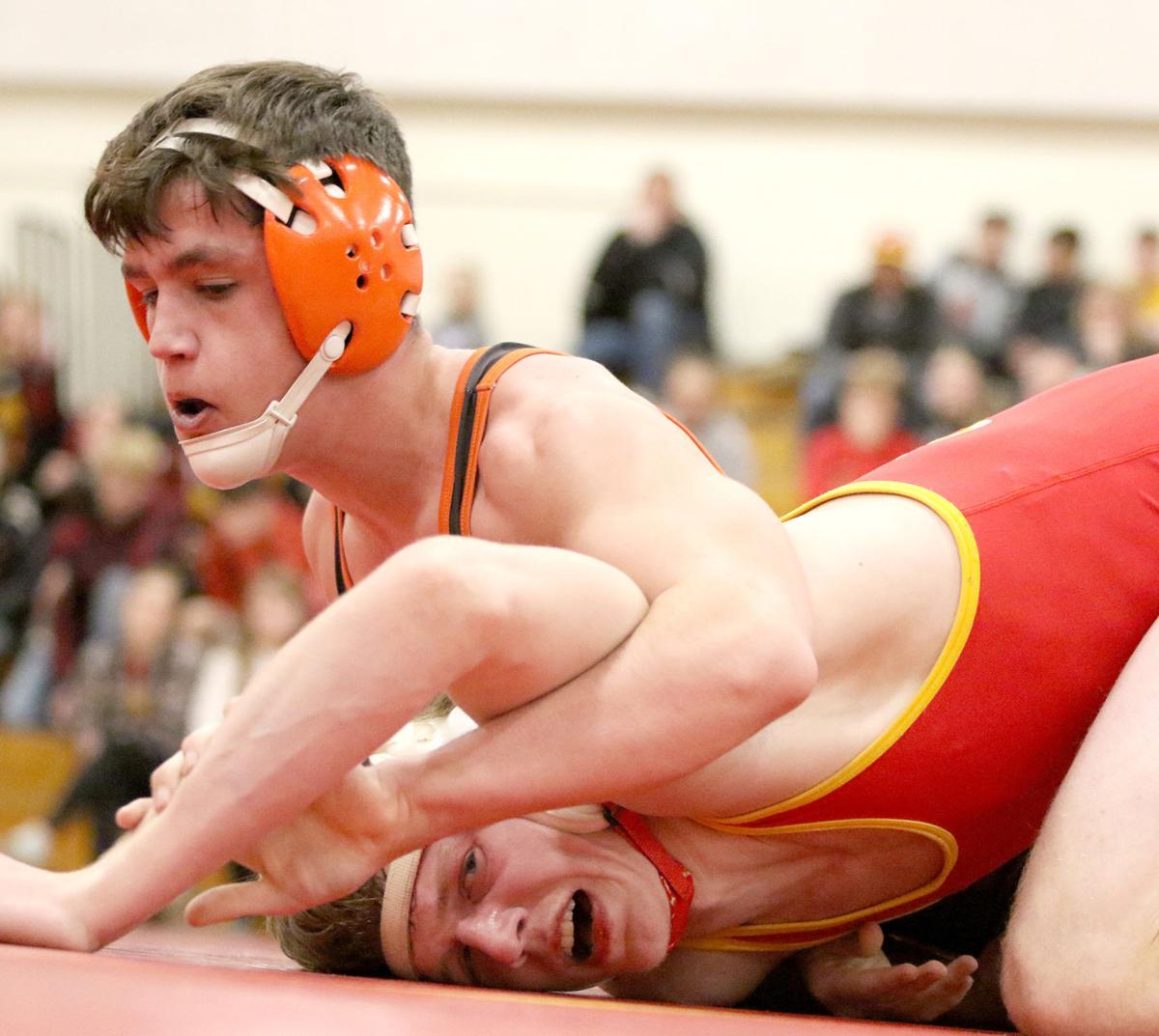 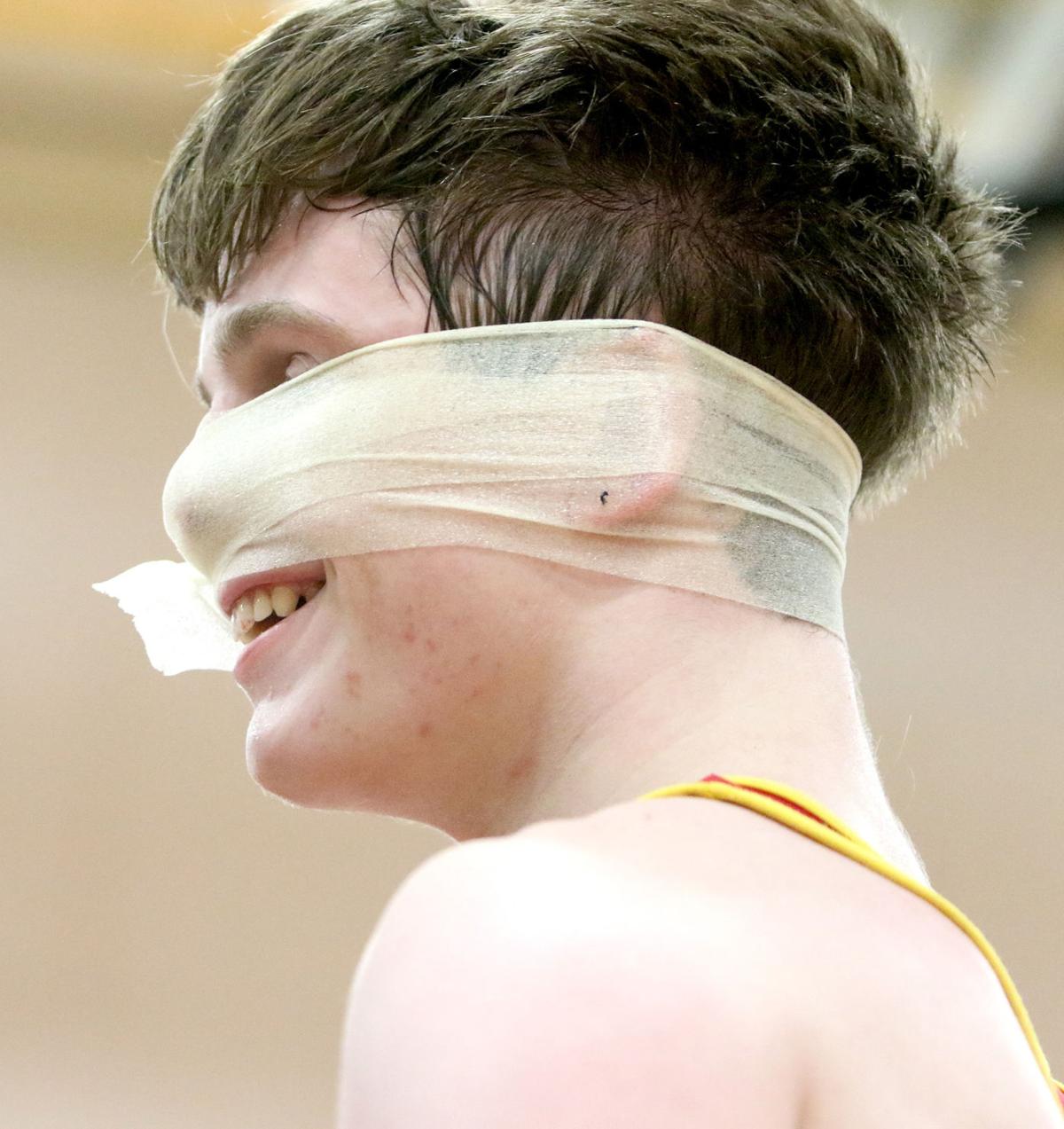 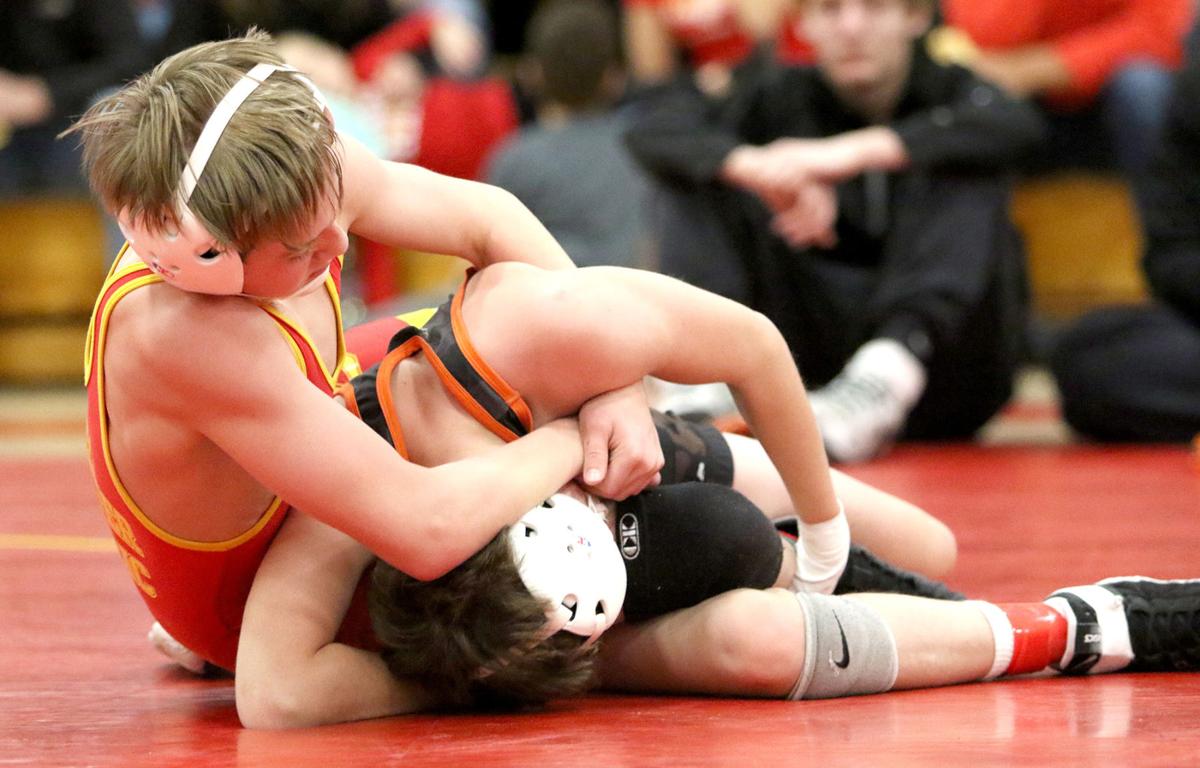 Kuemper Catholic wrestler Riley Parkis (left) grabs the arm of Dreylen Schweitzer (right) during the second period of the 106-pound match between the two. Parkis would grapple with Schweitzer well into the third period before Parkis earned a pin. 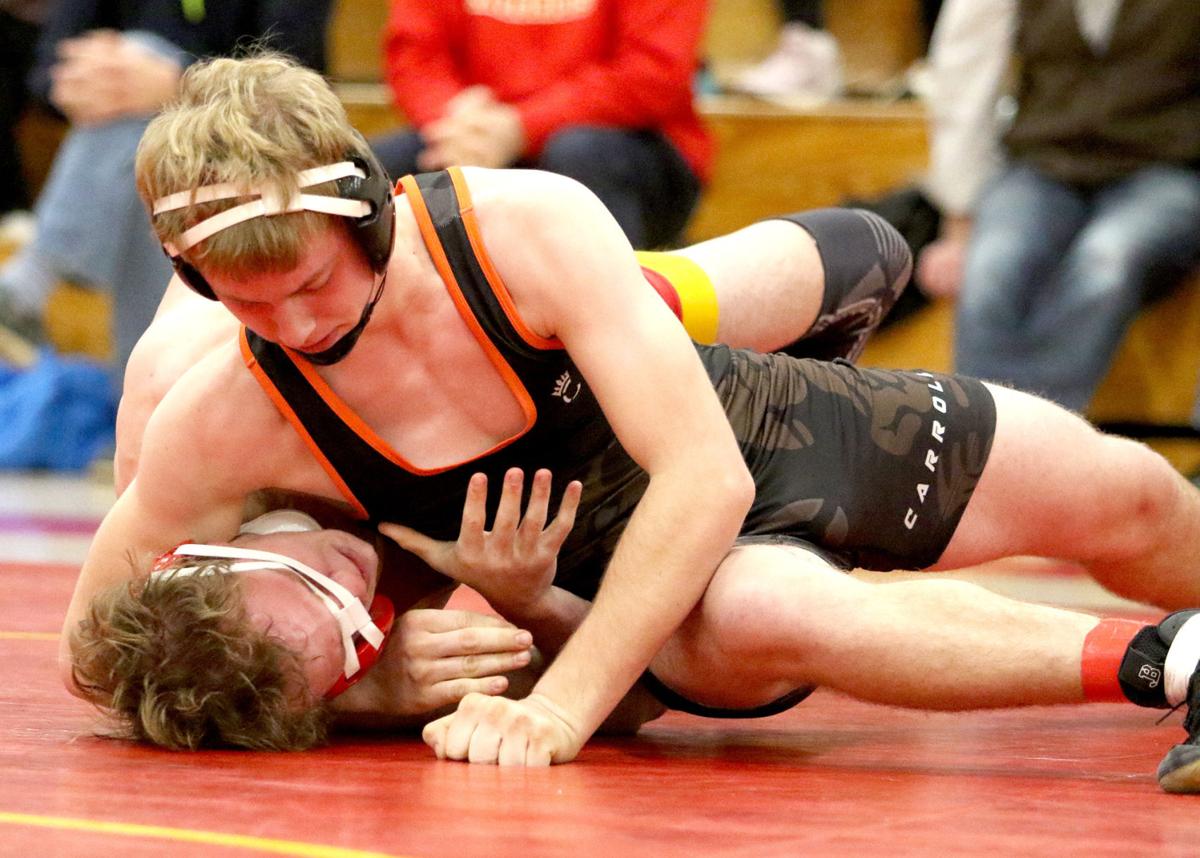 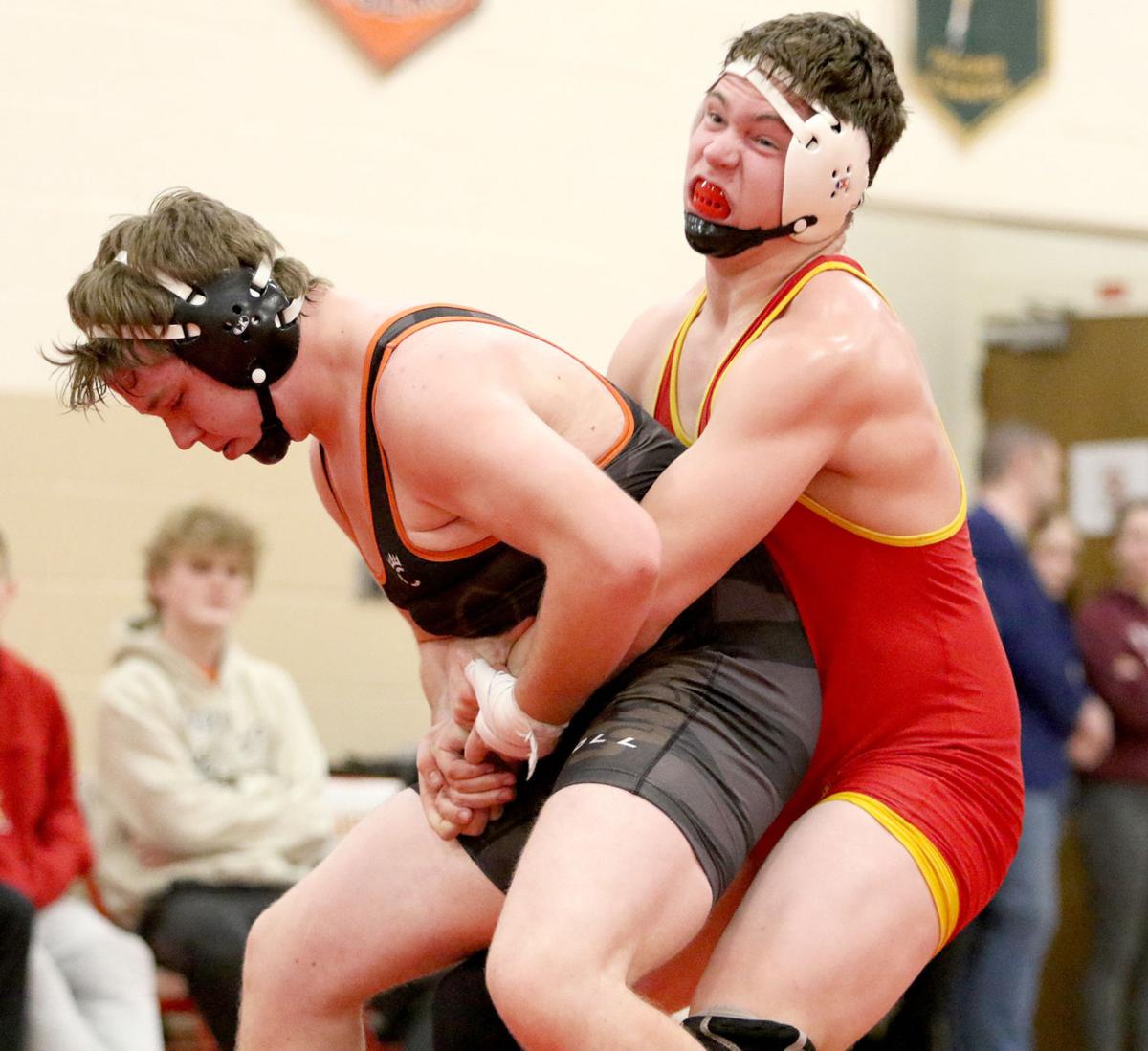 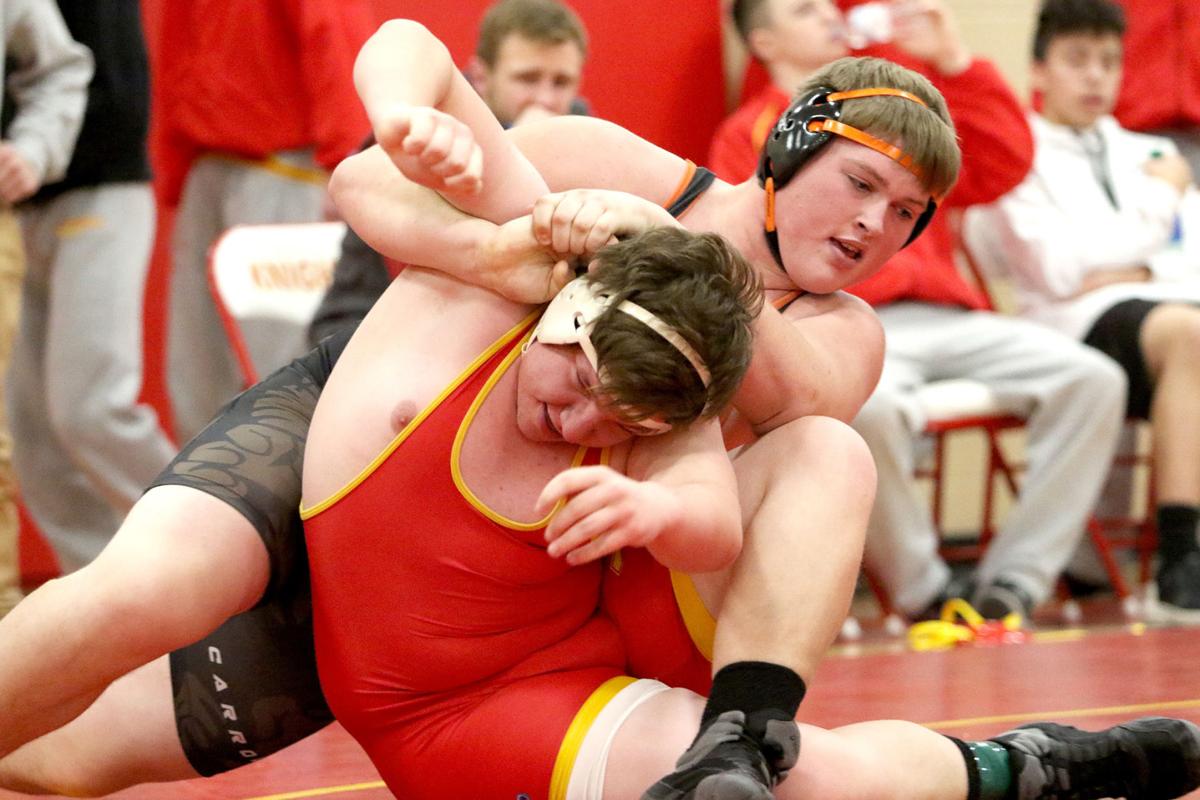 Carroll High 285-pound wrestler, Carter Vonnahme (back) locks the head of Kuemper Catholic wrestler Alex Grote (front) during the first period of the match held Jan. 7 in Kuemper High. Vonnahme would wrestle Grote for 1:47 before Vonnahme was able to pin Grote for six points. At the time it was the first win of the night for the Tigers. Later, Carroll would go on to win the dual match 44-24 over the Knights.

Kuemper Catholic wrestler Riley Parkis (left) grabs the arm of Dreylen Schweitzer (right) during the second period of the 106-pound match between the two. Parkis would grapple with Schweitzer well into the third period before Parkis earned a pin.

Carroll High 285-pound wrestler, Carter Vonnahme (back) locks the head of Kuemper Catholic wrestler Alex Grote (front) during the first period of the match held Jan. 7 in Kuemper High. Vonnahme would wrestle Grote for 1:47 before Vonnahme was able to pin Grote for six points. At the time it was the first win of the night for the Tigers. Later, Carroll would go on to win the dual match 44-24 over the Knights.

Tuesday night for 13 separate matches Carroll waged war in a fierce civil war. The battles created long lasting memories, and more than a few horse voices for the rest of the week.

Midway through the matches, Carroll was trailing 24-16. However that just seemed to inspire the Carroll wrestlers more.

The turn around for Carroll started at 145-pounds when Abraham Dirks was able to pin Landon Renze in 1:37.

The Kuemper lead was starting to wobble, but in a few short matches the wobbling had turned into a complete toppling.

The lead grew one match later when Luke Woosley pinned his 170-pound opponent Brayden Riesberg in 1:14.

Carroll’s Cade Schable would earn the fastest win of the night when he pinned Jaggar Luetje in 48 seconds. In the 195-pound match Carroll’s Evan Wernimont was able to pin Kyler Eischeid in 54 seconds.

With that the pin, the sixth of the night for Carroll, and fourth straight, Carroll was able to end the match with plenty of momentum.

The ending of the match also left a sour taste in the mouth of Kuemper head coach, Shane Vaughan.

“I saw us get pinned six times,” Vaughan said when asked about the dual with Carroll. “It’s hard to win a match when that happens. Especially giving up four in a row at the end. We had guys step up and wrestle well against Carroll. We had a lot of good things, but it is hard to be happy with that right now, because of how the dual ended.

Kuemper won five of the first seven matches. Cal Wanninger kicked off the Kuemper wins with an 8-1 decision win over Tyson Bordenaro in the 220 pound match.

After Carter Vonnahme from Carroll pinned Alex Grote in 1:47 in the 285-pound match, Kuemper’s Riley Parkis was able to earn a pin over Dreylen Schweitzer in 5:45 in the 106 match.

Logan Nepper won the 120 match when he pinned Degan Schweitzer in 3:49. Kuemper then featured a 126-pound win when Ben Schmitz earned a hard fought 7-5 decision over Jaxson Kuhlmann.

Carroll’s Carter Drake won a prolonged match against Hayden Stout in a 13-4 major decision. The match lasted nearly 20 minutes as Stout suffered from a bloody nose that halted the match four times. Eventually Stout had his nose wrapped to stop the bleeding.

Shea Parkis would pin Carroll’s Morgan Staiert in 1:32 in the 138-pound match.

While Vaughan wasn’t satisfied with how the dual ended, he was happy about the atmosphere in the Kuemper gym on Tuesday night.

When Carroll and Kuemper were locked in their civil war both sides of the gym were yelling. Fans from Carroll, Kuemper and even just passersby couldn’t help but get caught up in the rivalry. Volume levels in the Carroll gym reached a fever pitch. The gym rang with cheers and jeers from all sides of the gym.

It was an atmosphere that rivaled big-time basketball contests, and kept fans interested the whole match.

“Its a lot of fun,” Nagl said. “These guys are all friends, neighbors, cousins. Its a small community here in Carroll but for a few hours we can put that all aside and settle it on the mat. We can get chippy with each other. It’s not Kuemper and Carroll unless they have a little bit of chippiness to the match. These guys have wrestled each other since they could wrestle. Both of the coaching staffs have seen all the kids grow up in the program. There is a reason why it was as close as it was there for a while.

“Blowouts are boring. But when its tight everyone pays attention and gets into it. It was a fun go tonight.”

For Vaughan, this was his first Carroll vs. Kuemper wrestling dual. It was hard for him not to appreciate the close match on Tuesday night.

“It was a great environment,” Vaughan said. “The wrestlers are friends, the guys have grown up wrestling with each other. Its nice to have that kind of environment in town. We have the desire to win, and that’s why this one hurt a little more. Now we can go back to being friends and help each other get better.”

Nagl is appreciative of the civil war, not just because his side won, but because of how this dual will help prepare the teams for the rest of the season.

Tuesday’s match was a winner-take-all type of deal. Bragging rights were on the line, and the pressure was high. The only other time the wrestlers will face this type of match will be in February when it comes time to wrestle their way into the State meet.

Both coaches left Tuesday matches knowing where their squads need to improve.

For Vaughan and the Knights that will be taking every opportunity that is given to them, and also wrestling consistently in every weight class.

“We saw good things, but we also saw places where we got lazy and things that we will need to fix,” Nagl said. “In these type of matches the weaknesses really come out. In a blowout you might be able to hide some of your weaknesses, but against good kids, like Kuemper had tonight, your weaknesses got shown. That will help us both as coaching staffs to get better.”