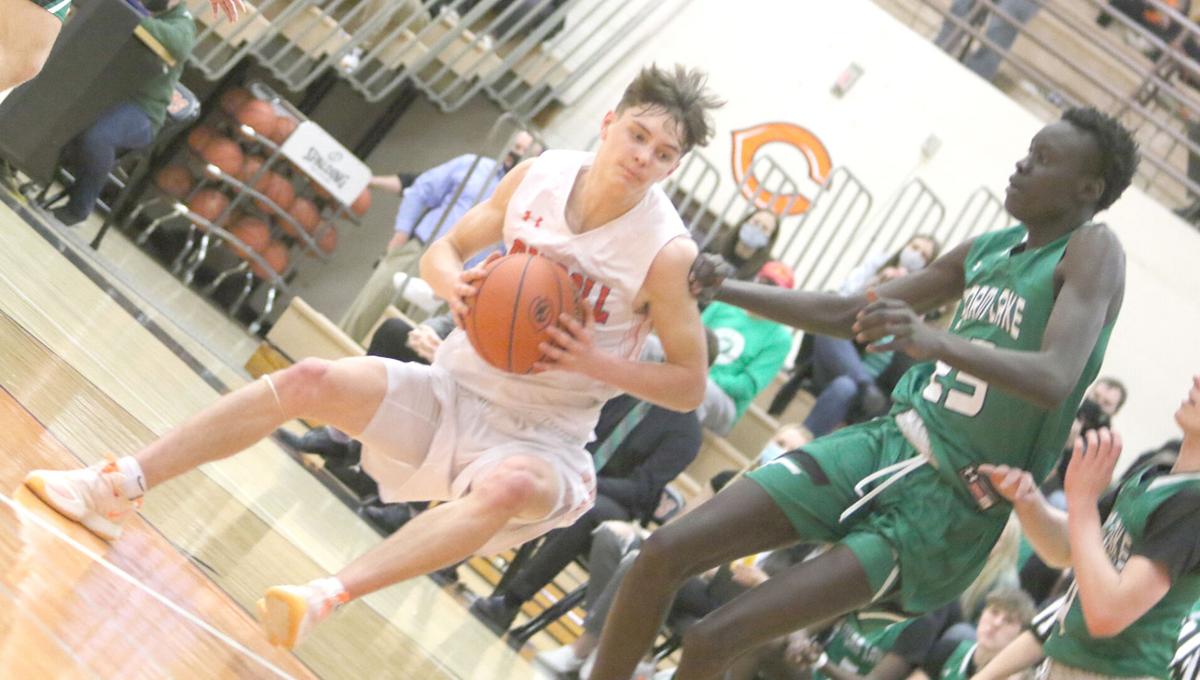 Carroll High’s Tory Feldman (left) powers into the lane as Storm Lake’s Luth Dak (right) tries to defend the play. Feldman was able to score on the play, helping Carroll win the class 3A substate semifinal game 62-45 over Storm Lake.

Carroll High’s Kelin Jones (12) goes for a layup over the defense of Storm Lake’s Austin Gaffney (25) during a class 3A substate semifinal game played Feb. 25 in Carroll. Jones was able to score seven points and added six rebounds in a 62-45 victory.

For the second-straight game, a three-pointer by a key senior was the final spark.

On Thursday night, Carroll was clinging to a narrow lead over Storm Lake in the class 3A substate semifinals.

Carroll needed something to get them going. That’s when the Tigers were able to connect with senior Treyton Goins as time was running low in the third.

Goins nailed a jump shot from just right of the top of the key. In a flash, the Tigers started to turn the lead more in their favor as another senior, Kelin Jones, was able to get a steal and a dunk to electrify the Carroll crowd.

“Treyton was able to get us going getting a few extra shots late in the third,” said Carroll High’s head coach Randy Bissen. “Kelin had a sweet dunk that helped us. In the first half, we kind of jogged to our spots on offense. In the second half, we played more of our style. We did a much better job in the second half.”

Carroll’s style that they needed to get to was spreading out their scoring around.

Goins’ shot near the end of the third quarter was merely the start of the Tigers settling into their style of play.

The fourth quarter was a clinic on how Carroll likes to pass up good looks at the hoop for even better shots. The team is unselfish, and when the Tigers play unselfishly, they can turn around a game quickly.

In Thursday’s substate semifinals, the Tigers entered the third quarter with a two-point lead. They would lead by three at the end of the third, but their unselfish shot selection in the fourth helped the Tigers earn a 62-45 win over Storm Lake.

“It is good to have even scoring, but we didn’t show up at all in the first half,” Bissen said after the win that sent the Tigers to the substate final game. “We only scored 23 points in the first 16 minutes. I think the length gave us trouble, so we started to second-guess ourselves. We were more aggressive and under control. It is nice that we are pretty balanced, where if one guy is struggling, some of the other guys will usually step up.”

The whole team seemed to step up throughout a 25-point fourth-quarter run.

The final frame started with junior sharpshooter Kaleb Booth collecting a three-point shot. Senior Colby Christensen added another three. Before a minute of the fourth quarter had worn off the clock, Carroll was up by 10, and the lead only seemed to grow from there.

With Carroll gaining key shots from several of their starters, the game started to wear on the taller Tornadoes. As Carroll’s lead expanded, Storm Lake, which hadn’t called a single timeout in the first three quarters, used up three of its five timeouts within the first four minutes.

“In the second half, we called a few more set plays on where we thought we could take advantage of the Storm Lake players,” Bissen said. “I felt like in the second half we really just made more shots. In the first half I felt like we had a lot of one-and-done type situations. The second half we were able to get some extra offensive boards and a few extra shots.”

Leading the attack on the glass throughout the second half were two of the key components of Carroll’s well-balanced team. Tory Feldman and Jones have been two guys that Carroll will routinely go to when they need someone to get an extra offensive possession, or a chance to grab the loose defensive rebound.

For Jones, the impact of his game was felt on both sides of the floor in last Thursday’s win.

Jones not only had that dunk at the end of the third quarter, but he also was a key in Carroll’s breakout defensive effort in the second half.

“He was aggressive defensively too,” Bissen said about Jones. “All the ball screens he was more aggressive and helped guard the guards in the second half. Kelin got us some deflections, which always helps. He was able to drive the boards and get fouled, which helped. He was just in the right spot throughout the second half of the game.”

When Carroll did miss in the second half, it was usually Jones or Feldman that gobbled up the loose ball to allow Carroll an extra shot.

That type of play has fueled Carroll to a 22-win season, with them being just one game away from the State tournament.

“I really felt like this was just another nice total team effort,” Bissen said. “It is not like we have one star. We just had everyone really contribute to the game.”