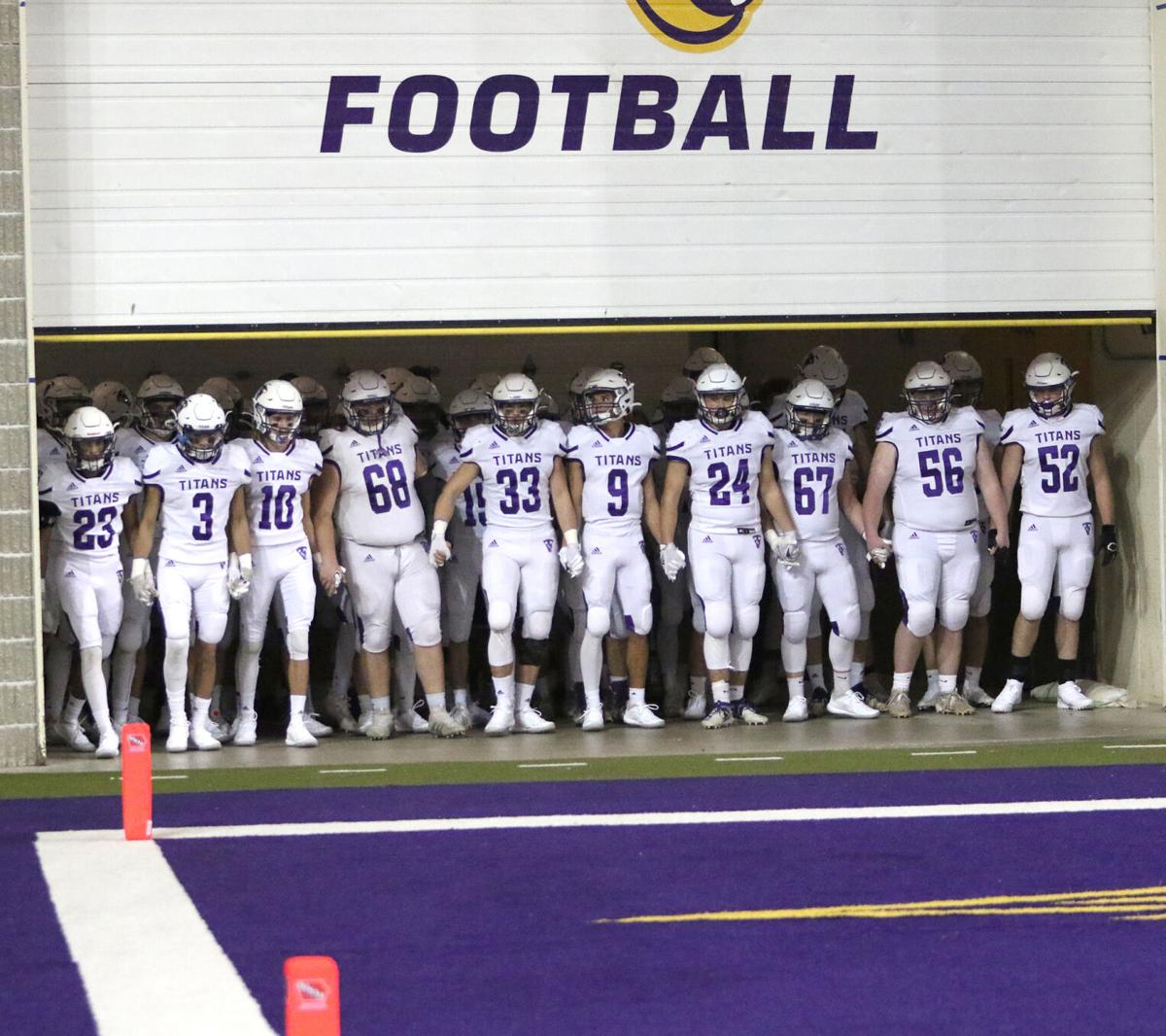 Members of the South Central Calhoun football team line up just before being introduced prior to their class 1A semifinal game against Van Meter. 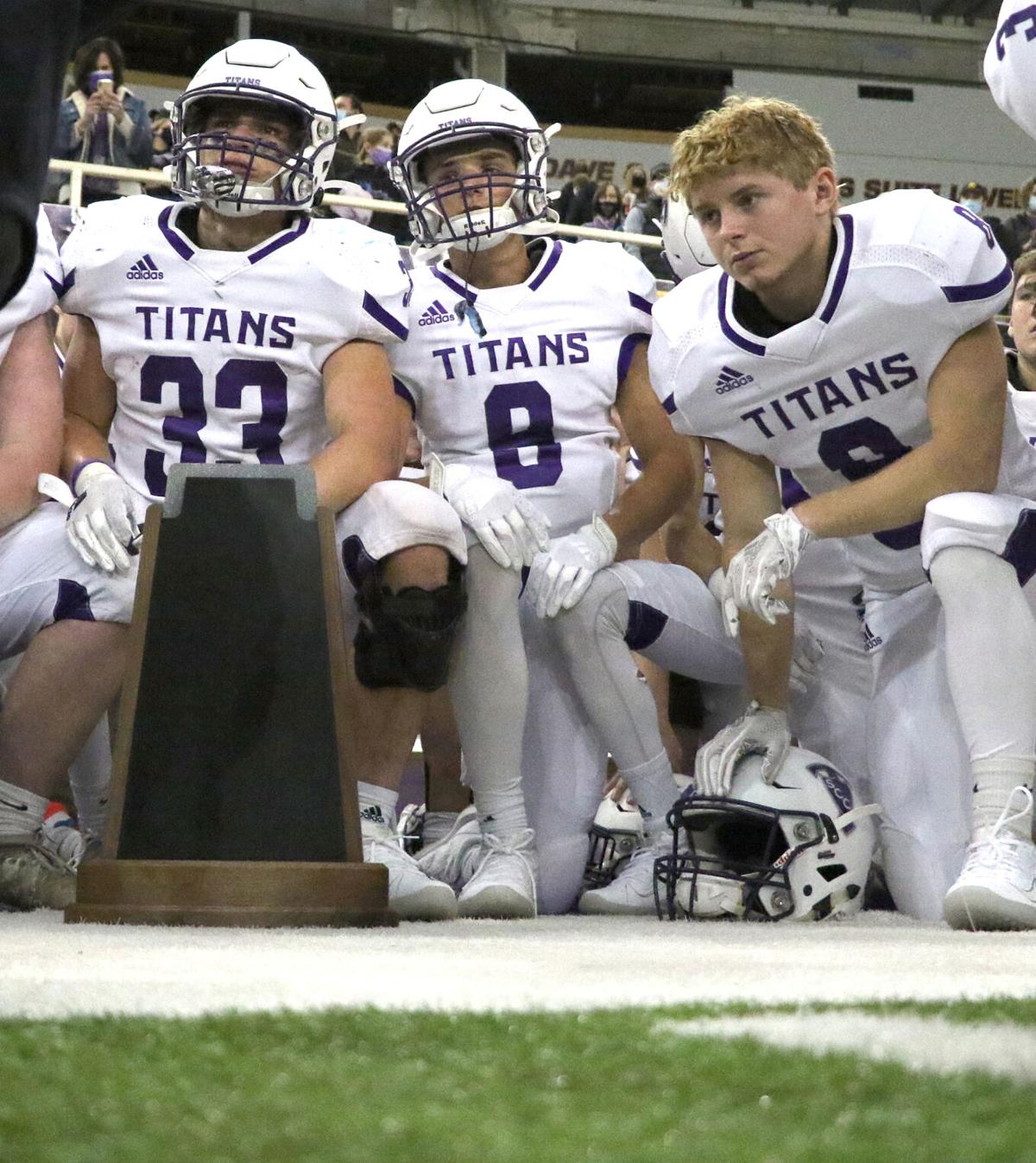 CEDAR FALLS: They had heard it for years.

After their freshman year when quarterback Hunter Muhlbauer, and other seniors such as Kyler Steinborn, Tanner Fistler and Jonathan Franz, among others, helped lead them to the quarterfinals, where a dropped pass in the endzone late brought an end to their season against Boyden-Hull/Rock Valley.

The sentiments returned the next year. This time the Titans had Chase McAlister, Jared Birks, Mason Merkley, Hunter Riedesel and Josh Van Hulzen as seniors. They would fall once again in the quarterfinals.

When the 2020-21 senior class members were juniors, everyone said the same thing. With seniors on the team such as Josh Henkenius, Landon Schleisman, Keagan Meyer, Chase Scheidegger and Zane Neubaum on the team, the Titans made it to the quarterfinals once again.

For three years the Titans had heard, “This is the year; if you don’t make it to the dome, you won’t get to go.”

Despite all the doubt — and not to mention a global pandemic that threatened the football season as a whole — the Titans were able to fight their way back to the top echelon of the class 1A football ranks this year.

Then, came a week 5 matchup against Southeast Valley.

It seemed like it would be another tough battle. Both the Jaguars and Titans were undefeated. However, the Titans had history on their side. They hadn’t lost a home district game in six years. A home regular-season loss hadn’t happened in three years.

That’s when the voices from seasons past started to get louder.

“It’s not your year,” doubters and the nagging voices told the seniors of the team.

Instead of dwelling on the loss, South Central Calhoun, and especially the seniors, wanted to silence any critics that were out there.

“That one loss to Southeast Valley was probably the best thing that could have happened to us,” senior starting quarterback and safety Cole Corey said. “It kind of pushed us the rest of the season to keep getting better.”

The senior leadership of the Titans came together after the loss — much like they had before the season started, when it seemed like a fourth-straight chance at the dome seemed uncertain.

In March of this year, nothing seemed like it was going to be normal again. Just before St. Patrick’s Day, schools across Iowa were forced to close down. With the shutdown came an immediate stop to all extra activities.

One of the victims of the shutdown was the off-season program of South Central Calhoun, one of the things that has made the Titans a perennial power in football.

But when school shut down and the Titans were not able to get their off-season program running like it usually does, that didn’t slow down the seniors.

“Us seniors, the captains of this year’s team, we didn’t want to stop things when COVID first started,” said senior captain Brennan Holder. “We got everyone together and we told the team that we weren’t going to stop lifting.”

The captains rallied behind their team and the success of their team, and made sure that everyone who planned to play in the fall were working together.

“We made sure that people were getting together to lift and get our workouts twice a week,” Holder explained about what the seniors did. “We pretty much just held each other accountable. We all had the mindset of working for the fall. Even though we couldn’t be there as a complete team, and we couldn’t have any coaches there, we made sure we did what we usually do.”

According to their head coach, Bryan Case, the ultimate run that the Titans made this season can be traced back to how the team responded when schools first closed.

A lot of it is because of the actions of the seniors.

“We have great kids, especially this group which made it to the quarterfinals for four straight years,” Case said to media after the semifinals. “To finally able to get over the hump and make it back to the dome for the first time in 11 years is always going to be special. It really started when we dismissed school because of COVID. These guys made the determination that they wanted to come together and keep things going. They wanted to work as hard as they possibly could. That meant that a small group of kids, I think three or four of them, were able to get together and lift weights. They came out and threw the ball around in small groups. They just stayed focused on football; obviously we as coaches couldn’t come out and be a part of that.”

When coaches were allowed to have contact with their team again, around July, the Titans were a team that hadn’t missed a beat. That made the rest of the summer go smoothly, especially as the Titans adjusted to a shorter regular season and longer playoff period — changes the Iowa High School Athletics Association needed to make to respond to COVID-19.

“They took it upon themselves to keep the tradition with each other and what we had historically done with our offseason workouts,” Case said.

After the week five setback against Southeast Valley, the same seniors helped the team come together, made sure the same thing wouldn’t happen once again.

“It was one of those things were we had to bring the team together,” Case said. “The kids needed to buckle down, and you could see that. They just started to gel. I don’t think it was anything that we said or anything like that, but we hadn’t been beat in the regular season since 2017. We hadn’t lost at home since 2016. We hadn’t lost a home district game since 2014. Southeast Valley took all those streaks away, and our kids were crushed by that. They really were.”

The adversity of the loss to the Jaguars seemed to inspire the Titans as they would benefit from a bye week in week 6. Week seven featured another win by the Titans.

Then came the playoffs, and the one thing that had eluded the Titans for so long was once again the goal.

ROAD TO THE DOME

“Hats off to the seniors,” Case said. “They are a special group of kids, a tight-knit group, and you could see that. Especially after week 5, we had a lot of stuff going on, and you could really see the comrade going on with the team.”

The family feel to the team worked as the Titans rolled through the first round game against Sioux Central. In the second round, the Titans hosted a battle tested Dike-New Hartford team.

Late in the game, the Titans were leading by a slim margin, but a late game-sealing interception helped the Titans move onto the third round of the playoffs, where things started to get tougher.

South Hamilton was the next team the Titans would have to face. The Hawks were undefeated, and held a lead into the fourth quarter. The seniors rallied, starting with an interception from Corey. Hard runs by Holder allowed the Titans to down the previously unbeaten Hawks and once again make it to the quarterfinals.

Some of the doubters started popping up again, but this year’s quarterfinal round had a different feel to it.

This time in the quarterfinals, the Titans had a rematch. They squared off against Southeast Valley once again.

The focus and intensity from the season’s previous meeting against the Jaguars helped the Titans gain a lead, and after the early lead, the Titans never looked back.

After years of being told they lost too many players, didn’t have enough experience coming back, or a myriad of other excuses outsiders tried to use to explain why the Titans weren’t at the dome, the Titans finally proved their doubters wrong. They were going to the dome for the first time in 11 years.

The fans rewarded their players, too. Despite limited attendance being allowed at the dome, and a 9 a.m. kickoff time, the Titan fans roared when their team was first brought onto the field. The cheers gave the players chills.

“The atmosphere is crazy to play here at the dome,” Corey said. “That large garage door opened, and the first thing you can hear is the fans. They were all so loud. Everyone went crazy, and it was kind of a surreal moment as we finally realized that we were here at the dome for the first time.”

Although they didn’t win their semifinal game against Van Meter, the seniors were able to put what they had been hearing to rest.